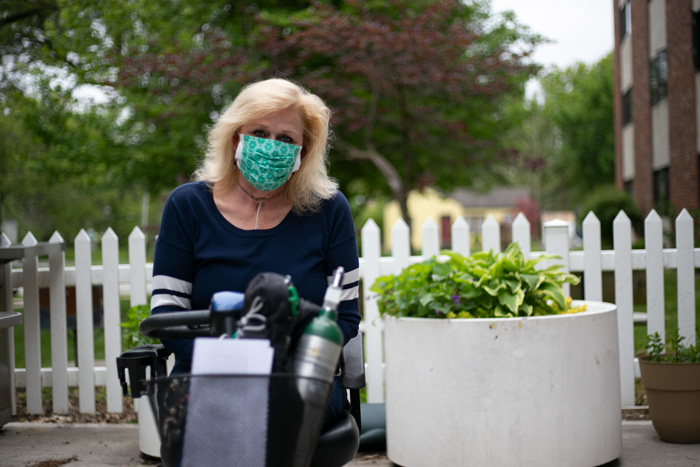 Johnson County is reopening parts of the economy that were shuttered during the COVID-19 pandemic, and Phyllis Greenquist is worried. She has Alpha-1 Antitrypsin Deficiency, a genetic lung condition that compromises her immune system. Born and raised in Kansas City Missouri, Greenquist always had breathing problems. She worked 34 years in the auto industry, but after a series of health complications, she eventually lost her job. Her condition qualifies her for disability and she’s on the lung transplant list, but her debilitation coupled with financial strains during the Great Recession sparked an onslaught of depression and suicidal thoughts. She credits her counselor at Johnson County Mental Health for saving her life and helping her find a new path forward in career and education. Now, she worries about herself and others like her in public housing who live in close quarters and could put each other at risk of infection. She lives in Olathe.

Everybody that lives here has something going on. They’re on fixed incomes. We’re all vulnerable people, to some extent. Matter of fact, last Friday, one of the girls here committed suicide. Like I said, we’re all coping with this in different ways, the lockdown, COVID.

We’re already limited on our independence as it is. What little independence we had left is now on lockdown. As if we weren’t already isolated enough, now we’re even more, if you ask me. And we’re scared to bring it back into our building. This is our little nest, our little community. We all care about each other here.

All it’s going to take is one person to expose me, after everything that I’ve gone through to fight to live as long as I have with this disease. I would hate to think that that would be the thing that would take me out.

I know this is going to sound really crazy. Before this whole COVID thing started, I ordered cheap presents from one of those websites that ships from China back at the end of November, and it was plastic, shrink-wrapped in plastic inside another bag of plastic inside the box. I didn’t think anything of it but in hindsight, I’m pretty sure that’s what unleashed it on me, anyway ‘cause I was sicker than I’ve ever been, and I’ve been sick a lot.

It started off with a headache, sore throat. Then I was coughing up blood; blood was coming out of my tracheal hole. I couldn’t hardly stand up, and I had a fever about 102, I had muscle spasms, I had pains in my side. It was unreal. There were a couple nights where I was afraid to go to sleep because I didn’t think I’d be able to breathe at all, and even with my machine pumping into me.  I did not think I was going to survive that.

When I called my doctor, he told me that it sounds like since I already had my flu and pneumonia vaccine, he was convinced that wasn’t it. But he said that they’ve had some unusual RSV going around, respiratory syncytial virus, and called in a prescription.

He said don’t come into the hospital, just drink lots of fluid, have somebody pick this prescription up for you, so I never went in. I was never tested for COVID, but I’m pretty sure I did because knock on wood, with all this stuff going around, I haven’t caught anything. I’ve gone to my pulmonologist for follow-up appointments, and I’ve got scarring on my lungs from this. He thinks it might be residual blood, but he says I’ve never seen this before. So that’s another red flag for me.

My anxiety is through the roof. All we see is the nonstop deluge on the news on TV. It’s constant, 24/7 streaming news about it. It can be triggering to some people. I choose to stay informed, and I’ve learned coping mechanisms to turn it off, but there’s some friends here that just don’t.

I want people to understand the importance of connectivity, whether it be reaching out to a peer or a professional. Talk about it. There should not be any judgment or stigma to express fears or anxiety because they’re real and they’re valid. Talking has got us through so much.

I know that there are people that have been furloughed that are insecure and feeling worried and anxious about losing their home. I understand the need to support their families, feed themselves. What worries me is that we do it so quickly that we’re going to have another resurgence of this.

I’ve actually had some people make snide comments on Facebook about it, like you don’t have to worry about it, your government check. I worked 34 years in the auto body industry, and on top of that, I worked for my education, so it’s not like I get a free ride.

They’re telling me since I’m immuno-compromised, just stay home. I understand their right to feed their family trumps my rights to have any freedom. It’s not like I was going anywhere anyway. But to be told that my rights are less valuable than theirs is kind of offensive actually, because we’re struggling too, just in different ways.

I hope to see people show more consideration and empathy. Try to be more understanding, because we’re all going through this. Whether we’re immunosuppressed or not, we’re all struggling. I think we should take this more seriously and treat everybody as if they have it. If they have it, you’re going to do everything that you can to prevent the spread.