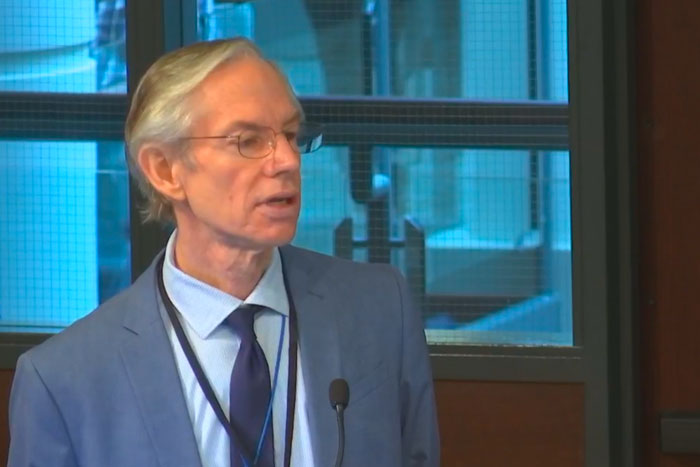 Joseph LeMaster, Johnson County's chief public health officer, said coronavirus response has been effective enough here that the county can move to phase two of the Kansas reopening plans with the rest of the state when the time comes. File image.

Johnson County’s response to the coronavirus has so far been effective enough that Public Health Officer Joseph LeMaster has given his approval to move into the second phase of reopening with the rest of the state.

LeMaster told county commissioners Thursday that the data trends are positive for the county. “The data for Johnson County continues to improve very heart warmingly and positively I am glad to say, and that is a direct result of residents and businesses taking the pandemic seriously,” LeMaster said.

Therefore the county should be able to join the rest of Kansas when Gov. Laura Kelly announces the beginning of the second reopening phase. That phase would allow more non-essential business to open and would loosen gathering restrictions. Johnson County has been one week behind the rest of Kansas because LeMaster ordered an extra week of restrictions, based on continuing outbreaks in surrounding counties.

However LeMaster cautioned that transmission of the virus is likely to increase as more people begin to move around. As a result, county health officials will be watching to see if deteriorating conditions merit a return to more restrictive rules.

On the same day, county officials announced the first cluster of cases not related to a long-term care facility. Nine employees at an Olathe distribution center have tested positive for the coronavirus, the first workplace-related cluster in the county. As a result, 200 more employees at that center will be tested, county health officials said.

No further details were given about how the disease spread, except that the center is not accessible to the public. County health officials will work with the employer, who is reported to be cooperating.

Long-term care facilities, meanwhile, have shown improvement, said Dr. Sanmi Areola, the county public health director. Five facilities with Covid-19 cases have contained their outbreaks since the late April, Areola said. And the senior living center with the most cases, Brighton Gardens of Prairie Village, has improved in its procedures, he said.

Brighton Gardens had 72 cases and 14 deaths from Covid-19, but a recent retest there showed all negative for the virus, leading Areola to say that the peak at that facility may have been reached. Brighton Village has been working with specialists and has improved its procedures, Areola said.

Meanwhile the county has expanded its testing and has reached out to other vulnerable populations including the homeless, he said. Supplies of testing materials continue to roll in, but there are not enough to do the 950 a day that the population warrants, Areola said. However the county may be able to push its test rate up to 350 or 400 a day with available supplies, he said.

Commissioner Mike Brown offered reassurance about the expected increase in cases as business begins to reopen. “Just because our testing positives go up in the near future – and they’re going to go up based on community spread – is not cause for alarm or panic,” he said. It just means testing is increasing, Brown said, urging people not to be “alarmist and knee jerk.”

But Areola did not agree, when asked, that the increase is 100 percent due to more tests being conducted. “It will go up because of increased activity, not just testing,” he said.

Commissioners also will consider next week a question that local breweries have been intensely interested in.

The commission will discuss at its next Thursday meeting a proposed ballot question that would loosen restrictions on businesses selling alcoholic beverages. Johnson County currently requires establishments that sell drinks to make 30 percent of their sales from food.

The “30-percent rule,” poses a hardship on the small breweries that have sprung up around the county lately. Brewery owners have been on an email campaign to get the rule lifted, but it will take a popular vote to do it.

The commission is expected to make a decision May 28 whether to put the question on the November general election ballot.