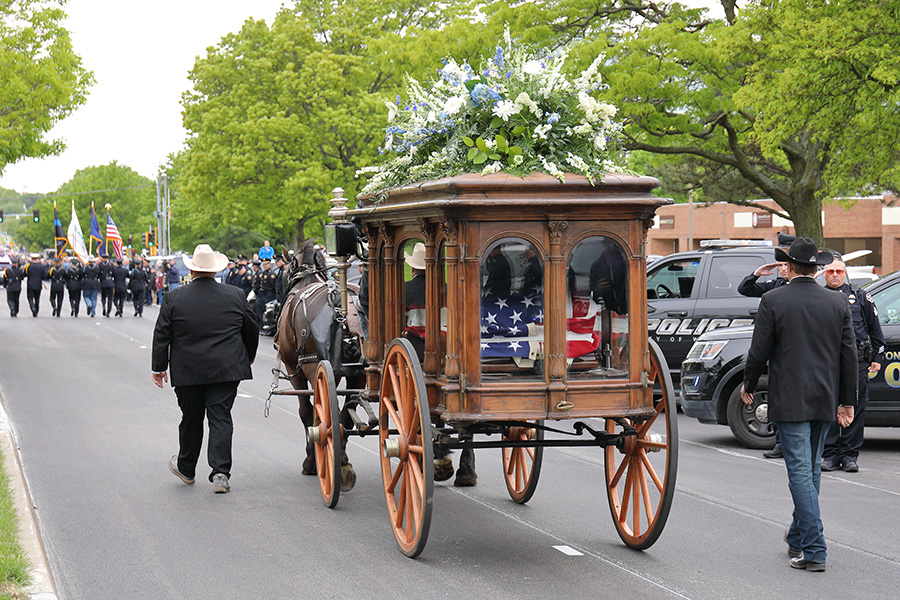 A section of 123rd Street in Overland Park has been renamed as Mike Mosher Boulevard, in honor of the fallen OP police officer who died in a shootout in May. Above, Mosher's funeral procession. Photo credit Mike Frizzell.

Fallen Overland Park Police Officer Mike Mosher was remembered by family and friends as a loyal colleague and doting father during a memorial service at the Overland Park Convention Center on Wednesday.

Mosher was killed in a shootout with a hit-and-run suspect on May 3.

“The partnerships and relationships that Mike built during his tenure as a police officer should serve as an example to all who call themselves public servants,” Donchez said.

Mosher’s 12-year-old daughter, Tyler, also spoke about her father. She said that her dad was the same fun-loving person at work as he was at home.

“My dad’s mission in life was to change the way people look at police officers,” Tyler said. “He did this by doing the right thing, even when no one was watching.”

Tyler also said she’s going to follow her dad’s love of airplanes and work towards earning a pilot’s license.

“And maybe give my services, if I’m good enough, to the police department or the military,” she said.

“For many years, whether in person or over the phone, I would start our many, many daily conversations with the phrase, ‘Hello you big beautiful man,’” Faber said. “I chose that phrase for Mike, not just because of his stunning physical stature, but more importantly because of his big, beautiful heart, soul and attitude.”

Mosher’s father, Scott, encouraged everyone to live like his son.

After the memorial service, Mosher’s casket was carried by a horse-drawn carriage as part of a walking procession to the Johnson County Memorial Gardens. Hundreds of officers from across the region lined College Boulevard from the convention center west to Metcalf.

The procession included a riderless horse from the Wichita Police Department, multiple honor guards, bagpipers, and police motorcycles from across Kansas City metro area and the state of Kansas.

Once at the cemetery, a private graveside ceremony was held for family and friends.

“We love you, we miss you, and you will never be forgotten. Rest easy, sir. We have the watch from here.”