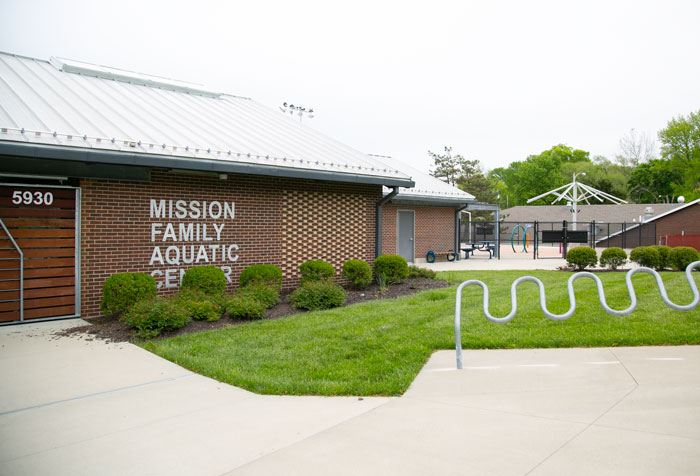 The lack of lifeguard applicants and COVID-19 limitations led the city to the decision not to open the Mission Family Aquatic Center 5930 W. 61st Street, for the 2020 season.

The city of Mission is the latest in Johnson County to decide not to open its municipal pool for the 2020 season.

The Mission city council on Wednesday evening approved a resolution outlining the city’s reopening plan, which included not opening the Mission Family Aquatic Center this summer due to limitations brought on by COVID-19. City Administrator Laura Smith said among the deciding factors were the lack of lifeguard applicants and the inability to “flip a switch and open up these facilities” to coincide with the fluid dates of reopening plans.

“It becomes this waiting game and this guessing game about when is the right time to fill a pool, can we get our guards certified, can we get open,” Smith said. “I think we came to the conclusion that we would not really be able to effectively do that.”

Smith said the decision to not open the outdoor pool this summer will also allow for city staff to focus their attention on the opening of the Sylvester Powell Jr. Community Center, and hopefully the indoor pool later in the year.

Cities across the county in recent weeks have been making the decision to close municipal pools for the summer due to the coronavirus pandemic. Prairie Village and Roeland Park were the first to make final decisions against opening this summer. Fairway’s council voted this week to keep the pool closed, though they reserved the right to keep an eye on the situation in hopes that a late summer opening might be possible.

Merriam, which was working to debut new aquatic facilities as part of its community center, has decided against making a call on the pool season at this point.

An Overland Park committee has recommended keeping city pools closed for the summer. That recommendation will go before the city council for a final vote.

Shawnee is planning to open one of its two municipal pools with significant restrictions in place.

The city’s COVID-19 reopening plan, similar to that of Roeland Park and the state of Kansas, is a four-phased plan. Each of the four phases will “be reviewed and analyzed on a rolling 14-day cycle,” and the dates coincide with those in the Kansas Reopen Plan, according to city documents.

Below are the changes to take place during each phase (a comprehensive plan can be found here). The plan is subject to change “based on public health criteria and the city’s ability to safely and responsibly provide services,” according to city documents. The dates associated with each phase can be moved to a later date, but may not be moved to an earlier date.

The first phase included the return of all public works employees on staggered shifts and with social distancing measures in place. Additionally, tennis courts opened.

Phase Two, beginning no sooner than May 18

The gathering limit increases from no groups over 10 people to no groups over 30 people. A potential, limited reopening of community center fitness activities will occur no earlier than June 1.

Additionally, the Mission Market will open virtually on June 4 for online orders and pick-up. The city will announce more details about this service via social media, the city website and the monthly email blast, Smith said.

The gathering limit is to be determined. City meetings and court dockets will begin to take place in-person, if appropriate, after July 1. There will be a “gradual expansion of use and access for community center activities,” and all playgrounds, sports courts and park restrooms will open.

City staff will bring forward a specific operating plan for the community center and municipal court for the city council to approve, per an amendment made to the resolution during the meeting. The city council unanimously approved the amended resolution, and therefore the reopening plan.