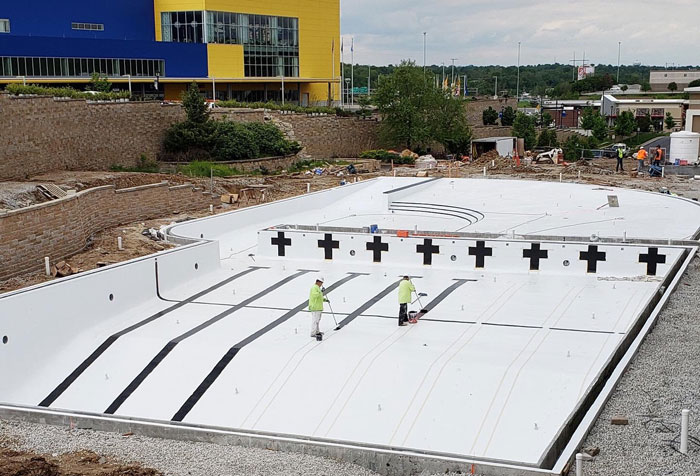 Merriam officials say work at the Merriam Community Center is about three weeks behind schedule, and this includes work on the pool facilities. City Administrator Chris Engel said city staff are discussing whether and how to hold the 2020 pool season given concerns regarding COVID-19. Photo courtesy of Merriam.

As cities throughout northeast Johnson County face the difficult decision of whether or not to close municipal pools for the 2020 season following COVID-19 concerns, the city of Merriam isn’t ready to decide one way or the other.

City Administrator Chris Engel said on Monday evening that the city council will have to discuss what makes the most sense for Merriam in the near future as several of its neighbors — including Roeland Park, Prairie Village and Fairway — have already closed down their pools. Those decisions are “51% financial and 49% safety” in Engel’s opinion, he said.

“We’re going to have water in our pools, so it’s really going to have to rest on safety: When it comes down to are we able to maintain safety, social distancing, lifeguards wearing masks, things like that,” Engel said. “We don’t have decisions yet, we don’t even have a facility that’s ready to open yet, but it’s going to get a little bit stranger if it turns out we are the only pool that’s open in northeast or all of Johnson County.”

The city of Merriam is expecting a three-week delay in the opening of its new community center, and therefore the same delay in the opening of its pool. If the pool doesn’t close for the season, Engel said the city will have to make decisions about how to safely run the facility. Conversations about opening or closing the pool for the season, as well as what those options mean for the city, are happening internally at the moment, he said.

While the city has not made any firm decisions about the pool opening for the upcoming season, the city did announce on Tuesday afternoon plans to reopen city offices to the public. Facilities will reopen to the public during phase three of Gov. Laura Kelly’s Kansas Reopen Plan, which begins no sooner than June 1 and allows gatherings of up to 90 individuals for all businesses and establishments.

Merriam Municipal Court is suspended until at least June 23, and a detailed list of rescheduled court dates can be found here. Additionally, the Irene B. French Community Center, 5701 Merriam Drive, will not be reopening to the public. A ceremonial closure will be in the works, and there will be a discussion about what the future of IBFCC looks like at a 5701 Citizen Committee work session via Zoom on Monday, May 18 at 7 p.m, Engel said.