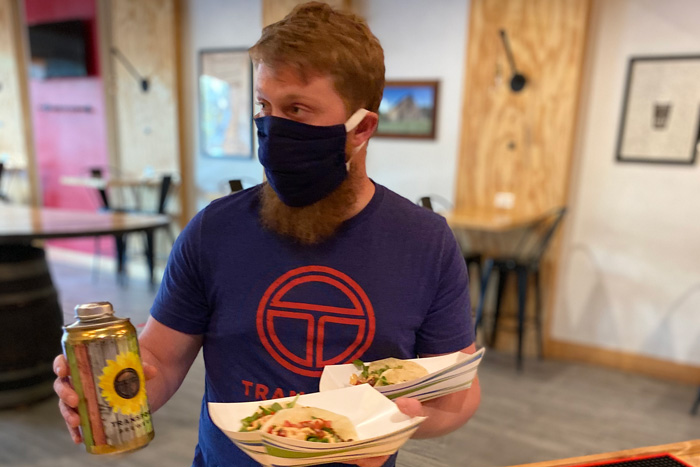 The Johnson County Board of Commissioners is expected to consider adding a question to the November ballot that would remove food sale requirements for establishments that sell alcohol. Photo courtesy Transport Brewery.

Local microbreweries have found new ways to stay afloat during the COVID-19 shutdown. Like restaurants, that means switching to exclusively curbside or delivery services. But another popular route is partnerships with other local businesses.

A quick note before diving into each of these stories: Reopening dates depend on licensing of each local brewery. Breweries could fall under multiple categories in Johnson County’s phased reopening approach. If breweries have a food license, they’re considered restaurants, and could have opened Monday, May 11. Without a food license, breweries fall under the category of bars and clubs, which can open no sooner than May 18.

Here are stories of three breweries and their strategies for catering to customers:

Jonathan Williamson, co-owner of Sandhills, said the partnership saves their customers a trip to the grocery store. It also introduces Scavuzzo’s to reach a larger audience. And for Sandhills, it meets the brewery’s requirement to make at least 30 percent of its sales from food.

“It’s worked out really well,” he said, noting they’ve sold about 1,000 pounds of meat a week. “The customers have loved it, we’ve loved it, Scavuzzo’s have loved it. It’s blown all expectations out of the water.”

Sandhills said they may continue to partner with Scavuzzo’s when the brewery reopens the taproom, June 1 at the earliest.

Nonetheless, curbside orders can get dull. Bartenders have switched from filling kegs and serving draft beer face to face… to filling to-go crowlers for customers to pick up.

“The day-to-day logistics are a lot more complicated, a lot more tedious, but we’re doing well,” he said. “We’re actually selling more beer than before, so can’t complain there.”

The changes are obvious to Williamson. Customers would typically buy one or two glasses of beer in the taproom, whereas now they buy one or two four-packs of beer. But Sandhills makes less money per beer sold, since crowlers cost more money to prepare.

“We make dramatically less money per beer sold, but since we’re selling dramatically more beer, it mostly evens out,” he added. “It’s fantastic.”

Williamson said they’re fortunate to have a loyal customer base that has kept Sandhills in business during the shutdown.

“There was definitely a couple weeks of almost outright panic as to what was going to happen and what we were going to do,” he said, “but frankly our customer base has pulled through and we’re able to keep the doors open.”

Transport Brewery in downtown Shawnee has kept up a steady pace of food/drink pairings with fried chicken, barbecue and Mexican cuisine.

Christie Merandino, operations manager, said their main goal is to allow their customers to make one trip for lunch or dinner by picking up crowlers in the taproom alongside their orders. Catering is set up near the taproom, and Merandino prepares to-go meals when customers place their orders and select a time for pick-up.

Nearly all of the food pairings come from local vendors like Woodyard Bar-B-Que, Affäre, Gus’s Fried Chicken and Browne’s Irish Marketplace. For Taco Tuesdays, Transport partners with Sancho’s Streetside down the street, which reopened after shutting down for a few weeks. Wednesdays include pretzel specials with KC Pretzel Boy’s.

Merandino said they also introduce customers to cuisine outside of the Kansas City area — like hotdogs and hot beef sandwiches from Portillo’s in Chicago. She also plans to partner with McLain’s Market once it opens in downtown Shawnee this summer.

Transport isn’t making a profit on the food/drink pairings, but that’s not the point for Merandino.

“I’m doing it because I love my customers; I think it just adds hope,” Merandino said. “I think the monotony at home is just weighing on everybody. It’s encouraging them to get out and spend money locally with two businesses, and to eat something different.”

At this point, Transport is planning to stay in business, although it’s been tough on the bartenders, so Merandino hopes customers will continue donating tips.

Like many of its counterparts across the Shawnee Mission area, Limitless Brewing has switched to curbside pickup for all orders.

“We have been doing OK during all this,” said Emily Mobley, co-owner. “We will be able to remain open when this is all over.”

On nice days, Limitless plays host to a few food trucks so customers can stop by for dinner and to-go beer in one place. If the weather is pleasant this Saturday, customers can come enjoy a food truck, cookie vendor and live music from 4 to 6 p.m. in the parking lot.

Mobley said they got this far because of their loyal customer base.

“It really comes down to the support of our community, and we couldn’t be more thankful for our customers and all the new people who have sought out our beers and supported our small business during this time,” she said.