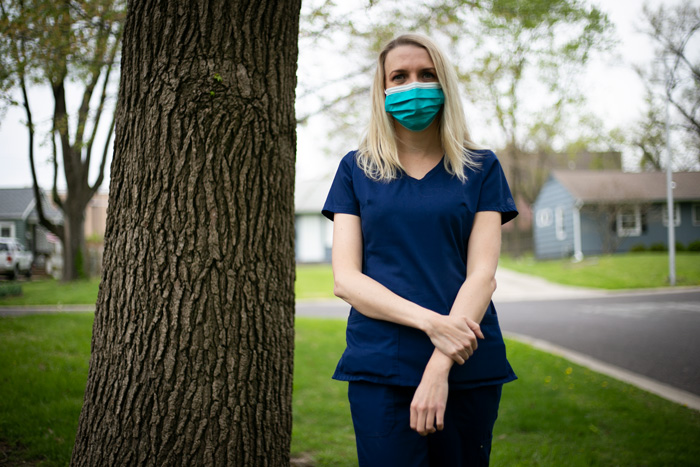 A cardiovascular ICU nurse at Saint Luke’s on the Plaza, Marie Stansfield’s sole focus at work has been coronavirus: Getting patients well, connecting them with their families and boosting morale. She volunteered to work the COVID-19 floor because she’s young and doesn’t live with anyone at risk. Plus, she’s been through disaster before; she worked at the hospital in Joplin when the EF-5 tornado struck in 2011. A Johnson County native who graduated from St. Thomas Aquinas High School and MidAmerica Nazarene University, Stansfield is studying to become a nurse practitioner and enjoys cooking, baking and (before covid) shopping at the city’s farmers market with her three-year-old daughter. They live in Overland Park with their cat, Uno.

I feel like how maybe it must have been as a nurse in the ‘60s, when they were doing the first heart surgeries. It’s like what are we doing, who knows, try this, we’ll figure it out. Does anyone really know how to fix a covid person? No.

The field I work in is very protocol and evidence-based practice driven. Now I feel like we’re in this new frontier where it’s sort of cowboy medicine. It’s not anyone’s fault, it just is what it is. There hasn’t been enough long-term studies and research done.

We started hearing about it probably in January. One of my intensivists, who’s a genius, had been telling us about covid, and we kind of laughed him off at first. That’s what they said about MERS and SARS, and those turned out to be OK. And the unit I work in, we are the last line of care for really sick flu patients, so it didn’t sound that scary to us because that’s what we do all the time.

I will say the organization I work for has been really on top of things, especially compared to other places in the area. We banned visitors very early, which I think was smart to keep the infection risk down. We’ve always had enough PPE from the get-go. But, there are places in the metro where nurses are nervous about having enough stuff.

Everyone was on high alert, but we actually didn’t have any patients yet. It was scary, but it was mostly just because of fear of the unknown.

When I go into the covid unit, we put on masks and gloves and goggles and gowns, and then we’re supposed to wear masks in the unit all the time. But then we talked about OK what do we do with the masks when we leave the unit? It was more fearful like that kind of stuff. What is our new routine going to be? How is this going to look? It’s like an odd new reality.

I think after being an ICU nurse after 10 years, I was getting a little bit jaded. You see enough death. But I don’t know, this whole thing has really made me remember why I became a nurse in the first place.

Morale has been really good. At baseline, we’re an extremely passionate team. That was why I decided to look for St. Luke’s. Because honestly, our head surgeon down to the housekeeper, they all love what they do, and it’s a really special place.

And morale among patients is better than I thought. I was surprised. I thought that patients and families would kind of freak out when we were like no one can visit you, and telling the family you can’t visit.

A couple weeks before this happened, I had a lady call and scream at me because there wasn’t a gluten-free menu available for her family member. So then I’m like what if I told that person, hey you can’t come see your dad.

But when I told this [covid] patient, I expected a lot of pushback, and instead, it was I totally understand and thank you so much for what you do. That was surprising to see that people get it. They understand it’s a different time.

If a patient really has covid, it sucks. I don’t think people get that. I’ve seen the signs that are like “if we die, we die.” And I’m like OK, I feel like that maybe about a heart attack, sure, a quick, easy death doesn’t sound as scary. I don’t think people realize if you have this, it’s a week of struggling to breathe.

The patients I’ve seen with it, they’re breathing 40 times a minute for days (normal is 12 to 20). If you can imagine how exhausted they are, just imagine panting like a dog for a week, and you’re too tired to talk, really.

They’re also in the room alone. They usually can’t hear the TV or the music that we have on because the oxygen is turned up too loud. And the only break they get from that is when either me or the doctor comes in to see them, which is once an hour, if we’re lucky, because I have to have all the isolation gear on. Normally I can just bop in the room whenever, and it doesn’t take me five minutes.

I just think it would be hard to feel like you can’t breathe for a week and then you’re literally stuck in your own head with your thoughts. So when I go in the room, I’ll tell this patient I know you’re in this room by yourself and you don’t see anyone, but all of your vital signs, we can see them out there at the desk. I try to remind them of that, because I feel like I would be really scared and alone.

The other thing is then trying to explain what’s going on to the family. So the family can’t visit anymore, that’s another really big change too. Normally before this all happened, when I would come on my shift, the family’s always right there after the surgery or like half the time. Now, when no one’s allowed to visit, the family is such a key piece within a report.

If your loved one has to go to the hospital, send a phone or an iPad with them, even if they don’t know how to use it. I promise you the nursing staff, we’re more than happy right now to help Grandma FaceTime with you.

It was really hard for me the other day. I had flu-like symptoms, I think it was just a sinus infection, I had to go to the drive-thru testing with my daughter. I tested negative, but that test sucks, it hurts.

So my daughter’s in the backseat watching these people in masks and gowns stick this thing up my nose. And then right after that, I got on Instagram and saw those people screaming at nurses in Denver. It was a little disheartening. I know I signed up to do this, but remember, we’re humans like everyone else.

I think people should be hopeful. The team I work with, we have some of the smartest people I’ve ever met working on it. And I think that they’ll figure something out.