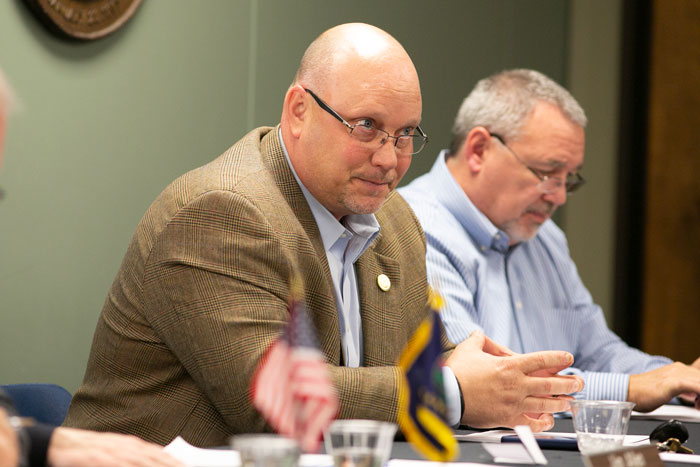 County Commissioner Mike Brown, an outspoken skeptic of restrictions that have kept non-essential businesses closed for six weeks, is putting the word out that the courts are an option for people who disagree with their business restrictions.

Brown took to Facebook Monday to advise readers that they can ask a district court judge to decide if they should be exempt from the stay-at-home order. Kansas law entitles petitioners to be heard by a county judge within 72 hours.

“I strongly encourage you to exercise your rights,” the post says.

Brown posted the message to his personal Facebook page but kept it unlocked so anyone could read it. He said later that the point of the message was transparency. “It frustrates me greatly when any government especially a government I’m a part of, is less than transparent with the people who own it,” he said.

The post is an outgrowth of a disagreement that erupted a week ago at a special commission meeting. Public Health Officer Joseph LeMaster, MD, MPH, had one day earlier extended Johnson County’s stay-home order, making it a week longer than Kansas counties outside of the metro area. Brown heatedly pushed for a parallel order by the commission that would have ended the shut-down this week. That motion failed. The post went up on Monday. It estimated low court costs if petitioners represented themselves in court and urged those who could afford it to file “ASAP.”

“An unelected official made a decision to continue imprisoning you in your homes and that decision and his unilateral authority was upheld by a BOCC majority on a 4-3 vote last Friday. That vote made it crystal clear you are not as important as lining things up “pretty” on a calendar – and your rights are flexible as they see fit.

“Now it’s time to show them your rights are more important than their Order,” the Facebook post said.

Brown said Thursday that he wasn’t so much encouraging people to file as he was letting them know about constitutional rights the county had kept quiet about. The post refers to the one-week extension as well as the rest of Kansas Gov. Laura Kelly’s order, he said.

The county order should have pointed out to people how to appeal their restrictions, he said. “It was done in the name of transparency, which has been a hallmark of everything I’ve pushed since I filed to become a commissioner.”

Brown said he was approached by a group of like-minded constitutional lawyers who were concerned about the stay-at-home order and the individual rights of citizens. He maintains there is no larger strategy involved, other than just being transparent.

“Good government makes sure people know what their rights are too, not just the parts they want them to know,” he said.

It appears at least one person has taken Brown up on the idea.

The managing partner of a Pilates health and well-being studio filed a habeas corpus petition on Wednesday in Johnson County District Court stating that his business, The Body Lab LLC, be declared essential and that he be allowed to reopen it.

Michael Green’s petition says he sent out information to clientele that he would reopen May 5, but on May 4 the Leawood police department threatened him with enforcement of the restrictions.

Green argued that his business doesn’t belong in the gym category that would open later. He said he has changed his business model to provide more essential functions, including rehabilitation and therapeutic health, and he said many of his clients are referred by doctors. The business also sells health beverages, the petition says.

His court filing also said the Body Lab would be set up with extensive safety measures in distancing, enhanced cleaning and staggered sessions to avoid too much contact between clients.

Brown’s critiques of the county health officials’ actions have spurred push back in some parts of the community. Nikki McDonald, an activist in Olathe, launched a petition calling on County Chair Ed Eilert to remove Brown from his position as vice chair. The petition had more than 650 signatures as of Friday morning.