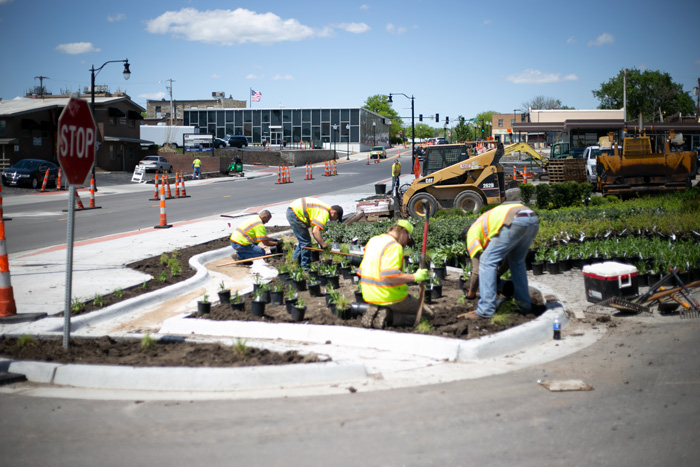 Crews place decorative plantings along Nieman Road this week. Landscaping and installation of benches, playground equipment and other amenities are the final stages of the Nieman Now project.

After a series of long delays that frequently irritated motorists and nearby residents, the Nieman Now project in Shawnee is in its final stages and wrapping up soon.

Paul Lindstrom, senior project engineer with the city, said crews expect to complete the project in the next two weeks.

“We’re getting close,” Lindstrom said. “I can actually say that I think we’re in the last stretch here. I know it’s been a long struggle, long haul to get this done, but I think it’s going to be a good project when it’s done. I think the public’s going to realize that it was worth waiting for…”

Lindstrom said 90% of the traffic cones will be removed after pavement striping is completed.

Neighboring residents and motorists have complained about the delays, which spurred the city last year to push out regular communications on the status of the project.

Back in 2012, the city began focusing more on making improvements to the Nieman Road corridor and downtown area. The goals were to improve walkable and bikeable connections, encourage private investment and improve the identity of the corridor as a gateway to downtown.

And private investment has occurred, including the McLain’s Market coming soon to the site of the former OK Garage, Sixty16 Apartments (formerly called Stag’s Spring) and a proposed mixed-use residential and commercial site on city-owned property.

“None of that was in place prior to the Nieman Now initiative,” Lindstrom said. “So I think you’re already seeing the results, and we’re not done with the project. That’s a bonus and a plus for the city. It was the right thing to do.”

At the same time, multiple stormwater projects, mostly on the south side of the project area, were scheduled to be completed over the course of five years. Lindstrom said the city council opted to get all of the stormwater work complete in two or three years instead.

Construction on the first Nieman Now project, stormwater improvements along the south side of the project area, began in summer 2016. The whole project was expected to wrap up by November 2018, but streetscape work had to wait until all stormwater projects were complete, Lindstrom added.

Once streetscape work began, the city pushed the completion date to December 2019. However, burying the power lines and utilities was a primary cause of the delayed project.

It took two years instead of one, partly because Black & McDonald frequently pulled crews off work to respond to emergency power outages, Lindstrom said, adding that Nieman Road is also “a tight corridor” with many utilities being buried in a small area, often with obstacles like rock that had to be removed or worked around. And Nieman Road construction could not begin until burial of utilities was completed.

“There was a lot of frustration… when we knew it was going to take longer,” Lindstrom said, noting that crews tried to work through the winter months as well. “People need to understand, it’s not a matter of contractor issues or whatever. It’s really about timing on utility locations. We had never done that before. It was a big undertaking.”