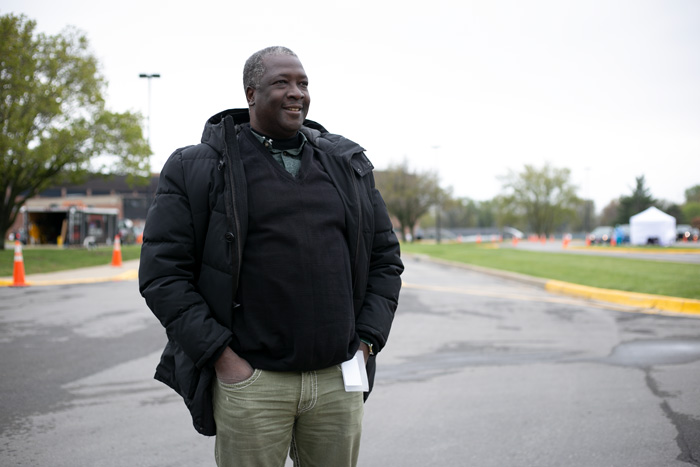 Sanmi Areola, director of the county health department, seen on the site of one of the county's drive through COVID-19 testing events. Areola on Thursday defended the county's decision to issue and extend its stay at-home-order, saying it was a timely and appropriate response.

Johnson County Health Officer Joseph LeMaster, MD, MPH, reiterated Thursday that there are no current plans to further extend the county’s stay-at-home order past its May 10 expiration date. Without an extension, the county remains on track to begin gradually reopening businesses Monday with distancing and capacity restrictions in place.

LeMaster’s extension of the order, which gives the county one more week of shelter-in-place rules than the rest of Kansas, has made him the target of fierce criticism among people who argue that the county needs to resume business more quickly. A week ago, Commissioner Mike Brown blasted LeMaster’s decision and tried unsuccessfully to have it rescinded.

Brown and others have said the economic suffering merits more consideration in the stay-at-home orders. The topic came up again at Thursday’s commission meeting, when Brown addressed Public Health Director Sanmi Areola, PhD.

“Would you not agree with me that how we’ve gone about this is completely and clearly wrong?” and that locking down the long-term-care facilities and other “high-concentrated living quarters” first would have been a better strategy, Brown asked. Outbreaks in senior living facilities have accounted for over half of the COVID-19 deaths in the county to date.

But Areola backed up the health department’s earlier decisions, saying the virus is new and hasn’t behaved like any others as far as its transmissibility and effects. About a quarter of the people infected show no symptoms, for instance.

Although the elderly have been most at risk for serious complications, “if you don’t take steps upstream to prevent the spread you will get to the people who are most susceptible,” Areola said. Some of the positive cases recorded at nursing homes were among staff.

With the exception of a continuing outbreak at Brighton Gardens care facility in Prairie Village, the county’s numbers are trending “pretty well,” he said. About 1.3% of the county population has been tested and of those, 6.7% have been positive.

“I’ll go back to what I’ve said several times since I’ve been here. The steps that were taken were timely, I think they were appropriate, and I think that’s why you are seeing the trend that you are seeing,” he said.

In response to another question from Brown, Areola cautioned that by allowing limited business to resume, health officials are not saying that things are going to necessarily be “okay.”

“I think we’ve been very clear that our best-case scenario is to have clusters that are in facilities or businesses,” he said, adding new waves of contagion are possible that could call for reinstating stringent distancing measures.

“I’m really confident that you would not find a lot of public health directors or local health officers using the words ‘it’s okay,’” he said.

The county reported 548 positive cases and 45 deaths as of Thursday. Some 148, or about 27%, of those people had hospital stays. About 9.5% of the positive cases ended up in intensive care. According to epidemiologist Elizabeth Holzschuh about one in ten of those hospitalized from the 40-49 year old age group and older landed in the hospital.

Areola said the next steps as the business roll-out begins will emphasize even more testing and contact tracing at levels that may be hard to meet.

Based on its population, Johnson County should be conducting over 900 tests daily in this next phase, he said. But officials are still working on getting enough materials to do that. Areola told commissioners he believes the county will be able to do 1,000 tests a week, given more supplies that are in the pipeline.

The health department is also working on getting more employees and volunteers to trace the contacts of people who have tested positive so they can self quarantine.

Areola noted that an outbreak at Brighton Gardens has continued. Nine deaths have been reported from the 57 positive cases there. The last one started just this week, on May 5.

County and state officials are continuing to work with that facility, he said.

During a commenting period at the end of the meeting, Commissioner Janeé Hanzlick suggested people take a longer view of the coronavirus crisis and think of how their actions will be remembered by history.

“Be kind and patient. Reach out to your friends and neighbors. Remember that everyone is struggling through this,” she said. “And please look for ways that you can leave a legacy just like the greatest generation did so in the days to come when people look back on this time, they’ll think about all the goodness and all the things that happened where we supported each other.”

Commissioners noted they’ve been receiving many calls and emails and hoped that the commission will soon be able to reinstitute its public comment period.