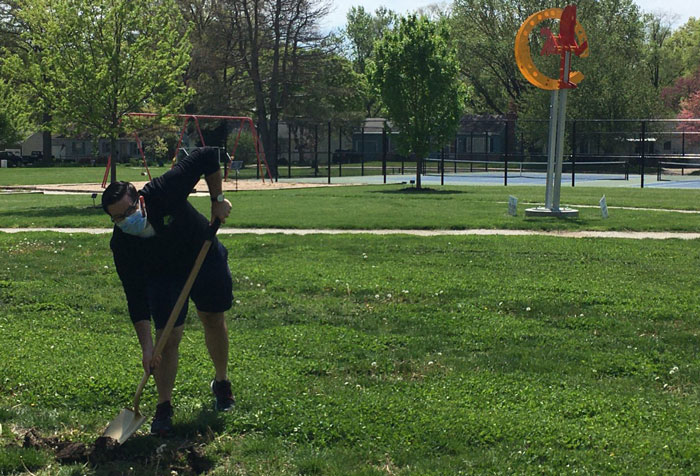 The city of Roeland Park on Monday began site work for phase one of improvements to R Park, 5535 Juniper Street.

After approving the three-phased, multi-year plan in March 2019, city councilmembers and city staff celebrated the beginning of construction with a socially-distanced groundbreaking last week. Mayor Mike Kelly said times like these make it clear as to why resources are dedicated to outdoor spaces, and that he thinks it’s a great time to improve the park.

“Given the challenges of today, it’s nice to have some good news to report to Roeland Park residents,” Kelly said. “This park’s plan was made through the consideration and hard work of a lot of different people — elected, volunteers, residents — and I am proud of the plan that we put together, I think it will help make our community more vibrant and improve the quality of life for Roeland Park residents.”

The total budget for R Park improvements is just over $1.7 million, and the bid contract for phase one and phase two — which are scheduled to be completed by mid-October 2020 — was recently awarded to MegaKC for $1,128,000. MegaKC included the following five alternates in its bid: a fireplace, a stone wall with a pergola, a grill and stone island, a southeast wing and a performance stage.

Phase one of the improvements includes the construction of a medium-sized shelter, restrooms complemented by accessible parking and asphalt removal to add green space. Phase one should last until mid-August 2020, and phase two will begin shortly thereafter, according to the city’s R Park improvement timeline. The addition of a soccer field and landscaping are the two main components of phase two.

The last of the three phases will include a concrete trail and a new playground structure, according to city documents. Kelly said as of now, phase three improvements are currently scheduled for 2022.