Johnson County residents can still register to vote in time for the Aug. 4 primary election. The deadline is Tuesday, July 14 and registration can be completed via mail, email or even text message. File photo.

While Chely Scarbrough signed up to work as an election judge in Kansas City this year, she isn’t crazy about the prospect of being in close contact with people in the midst of uncertainty over the COVID-19 virus.

“I am worried,” Scarbrough said. “I haven’t been able to hug or kiss my grandson since all this started.”

Still, she plans to report for duty for the June 2 municipal election in Missouri. Scarbrough also intends to work Aug. 4 when Missouri holds its primary election, and Nov. 3 when Missourians vote for offices as essential as governor and U.S. president.

“I’ll be wearing my mask and I guess wiping down the pens and all the things they need me to do,” she said.

The prospect of voting in a pandemic is creating fears and logistical nightmares across the U.S. Democrats and some Republicans are urging Missouri’s political leaders to follow the lead of Kansas and other states and encourage mail-in voting — or at least create early voting opportunities to reduce crowds on Election Day.

Many leading Republicans, including President Donald Trump, oppose expanded access, saying it favors Democratic candidates. But studies in states that mail ballots to all registered voters dispute that contention. So far, only Colorado, Hawaii, Oregon, Utah, and Washington have vote-by-mail systems in place, where a ballot is mailed to every eligible voter in the state. Studies of voting behavior in Utah and Washington have shown that the implementation of vote-by-mail increased voter turnout. Since 2004, voter turnout in a general election year hovered around 60 percent. For comparison, in the 2016 presidential election, Missouri saw a voter turnout rate of 62 percent compared to a rate of about 60 percent in Kansas.

Some states are already seeing the impacts of holding in-person elections during a pandemic: In Wisconsin, at least seven people contracted COVID-19 from voting during the primary elections on April 7. Now, states as politically and geographically diverse as Alabama, Connecticut and West Virginia are lifting restrictions so anyone worried about COVID-19 can request an absentee ballot.

But Missouri Gov. Mike Parson said on April 14 he wasn’t interested in modifying the state’s voting laws, and that anxiety about COVID-19 and even stay-at-home orders don’t meet qualifications for voting absentee.

The uncertainty leaves Missouri county clerks and election officers with a host of obstacles.

Lauri Ealom, Democratic director of the Kansas City Election Board, has fielded calls from nervous poll workers, many of them older people who have worked elections for decades.

“They are scared to death,” Ealom said.

Traditional polling places like churches and senior communities are off limits. Voters will have to travel farther to new locations, and likely face longer lines and a process slowed down by sanitation protocols.

In Kansas, the focus is much different. Staffers in the Johnson County Election Office are educating voters about how to apply for and fill out ballots at home, said Nathan Carter, the office administrator.

“Our work right now is primarily about preparing for an increase in voting by mail. Frankly, we’re going to promote that increase,” Carter said.

Since 1967, Kansas law has permitted citizens to vote by mail up to 20 days before a scheduled election. It has multiple safeguards against fraud. To obtain a ballot, a voter must sign an application and provide a copy of an approved form of photo ID, like a driver’s license. Election staffers match the signature with voter registration forms. The signature is verified again once a mail-in ballot is received.

The Kansas Secretary of State offers an online tool, VoterView, at which voters can track the dates when their application is accepted and ballots mailed and received.

While Kansas is encouraging mail-in voting, Missouri is sticking with one of the nation’s most rigid voting laws. To vote early, citizens have to attest that they qualify for one of six circumstances, like being out of town on Election Day. Mailed-in ballots require a notarized signature, which has become a hurdle with offices closed and notaries staying home.

The Missouri Association of County Clerks and Election Authorities has for years unsuccessfully sought to allow Missourians to vote absentee without an excuse.

“Our postage increases would go through the roof,” Brown said. “I don’t think that’s the direction Missouri wants to go in.”

Ashcroft said he would be open to legislation that somewhat eases restrictions on absentee voting, but added, “I’m not certain how to do it or what exactly the language should be.”

In the meantime, he said, “I’m confident we can hold good elections without any sort of legislative changes.”

“We’re having trouble getting a hold of some of our places,” Brown said.

Ealom said her staff has put together options that begin with school gymnasiums and extend to possibly setting up large tents for the November election.

At least for the June municipal election, which generally draws a light turnout, Kansas City will probably operate with only about a fourth of its usual number of polling places, Ealom said.

A lot of the planning for this year’s elections now focuses on maintaining adequate physical distancing and sanitation. Ealom said she ordered 144 gallons of hand sanitizer and other supplies back in January, after an epidemiologist friend told her about a new virus. But she has struggled to obtain enough gloves and masks for poll workers.

“I can’t in good conscience pay somebody $180 for the day and not provide them with masks,” Ealom said.

Ashcroft’s office has received more than 16,000 masks and plans to get them into the hands of local election officials next week. He’s also expecting orders of hand sanitizer, including some from McCormick Distilling Co. in Weston. The state’s vocational training program for inmates is producing “distancing dots” to guide voters in lines. And election officers are ordering bulk quantities of pens and styluses for one-time uses.

Ashcroft’s office is suggesting local election offices recruit teachers and older high school and college students as poll workers. Ashcroft said if shortages persist, Parson has indicated he would consider deploying National Guard troops to work at the polls, although Ashcroft acknowledged that could make some voters uneasy.

In Kansas City, Scarbrough, who has worked as an election judge for three years, said she wished her services weren’t so essential.

“I think we need to go to some kind of mail-in voting,” she said.

Barbara Shelly is a freelance reporter for The Beacon. 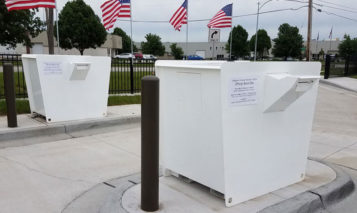 JoCo Election Office planning for 90% turnout for Nov. 3, with most ballots cast by mail 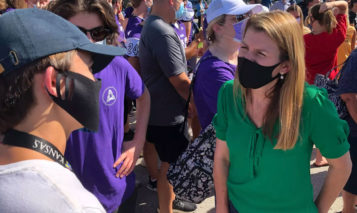 How the coronavirus altered the race for Kansas’ 3rd U.S. House District 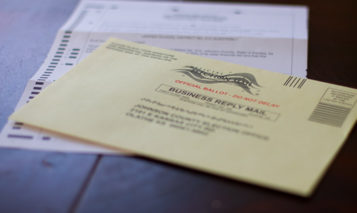