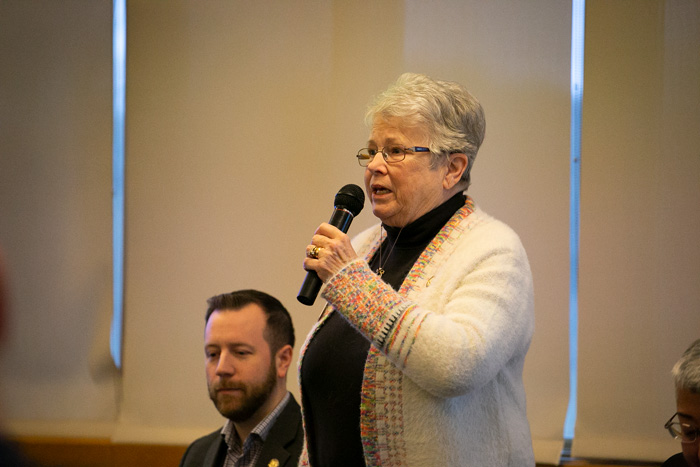 Shawnee Rep. Cindy Neighbor, a Democrat, faces two Republican challengers in her race for reelection to the District 18 seat in the House this year.

Neighbor served in the seat from 2007-2011 before losing to Republican John Rubin in 2010. She ran for the seat again in 2016 and defeated Republican candidate and Shawnee councilman Eric Jenkins. She faced Jenkins again in the 2018 cycle, and defeated him 53-46.

Republicans Cathy Gordon and Calvin Vandegrift, who also live in Shawnee, have filed for seat and will face each other in the primary election Aug. 4. The filing deadline for this fall’s elections is June 1.

A former member of the Shawnee Mission Board of Education, Neighbor is seeking reelection to focus on budget issues. She has served a combined three decades on the district’s advisory committee (no longer active) and on the school board. She serves on the children and seniors committee in the statehouse.

“I think we have a lot to do,” Neighbor said. “I think this past year we did make some strides, but the issue is, now with the pandemic we have, to see how far that’s going to set us back and how it’s going to affect agencies.”

If reelected, she plans to focus on restoration of funding for transportation and education, especially as the COVID-19 pandemic impacts those areas. She would also like to see the foster care program “get back on its feet,” expand broadband internet access across the state, and work with businesses who have been impacted by the coronavirus shutdown.

“It’s finishing the job that we have started, hopefully to get us back where we’re not hanging on a cliff,” she added.

She lives with her husband, former councilman Jim Neighbor.

A nurse practitioner by profession, Gordon is a founder of Mercy & Truth Medical Missions (based in Shawnee) and New Birth Company in Overland Park. She ran for the seat in 2018 but lost to Eric Jenkins in the primary.

Citing previous advocacy efforts in the statehouse, Gordon said she’s seeking public office to “make a change” in the state, especially in healthcare. Owning her own businesses and lobbying at the statehouse have helped her recognize needs for patient care.

“I appreciate and respect their (legislators’) roles 100%, how hard it is, and I’m ready to jump in and be on the front line with them,” she said. “My primary focus is to be a voice for people, as most of our representatives are, and to guide some of the decision-making in the healthcare field, and to make the right, smart decisions without compromising excellence in quality.”

If elected, she also plans to focus on addressing tax-related issues and supporting the needs of small businesses and educators, especially during the COVID-19 shutdown.

A board member of the Independent Certified Nurse Midwife Council as well as the Commission for the Accreditation of Birth Centers, Gordon served on the city council in Tyro, Kansas in the 1980s. She lives with her husband, Steve Gordon.

A first-time contender for public office, Vandegrift said he is running for the seat to get involved in the Kansas Legislature, and focus on simplifying and modifying the state tax code in order to lower taxes.

“They have all these different taxes that they put on you, and for me, I don’t see why it shouldn’t just be one simple tax,” he said.

If elected, he also hopes to address issues related to abortion. He said he would support a Constitutional amendment that restricts abortion.

A graduate of Mill Valley, he earned a degree in automotive technology in May 2018 at Pittsburg State University. He taught English in Seoul, South Korea for about six months.

He works for Amazon, delivering packages.

His comment on the coronavirus: He hopes a vaccine is developed, because he expects the country to remain on some type of lockdown until that happens.