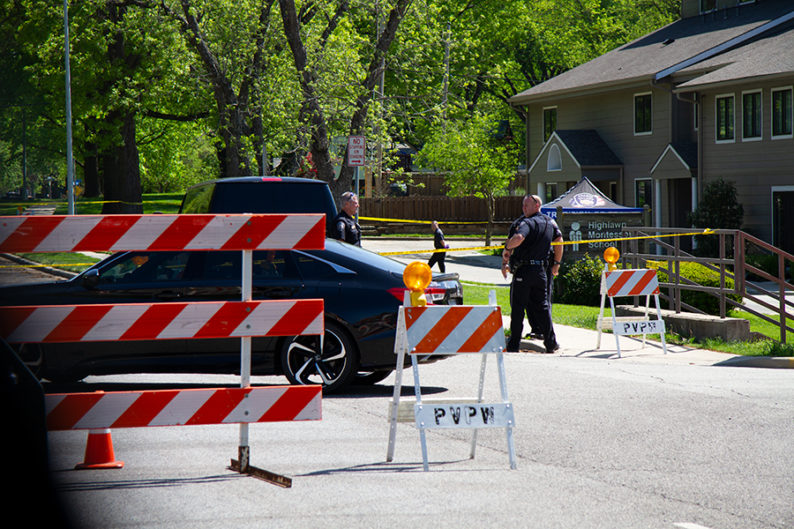 Prairie Village police are asking for the public’s assistance as they gather information about a shooting that left an 18-year-old dead this morning. (Note: Police initially said the victim was 19-years-old. We’ve updated the story upon the issuance of a correction by investigators).

Captain Ivan Washington said that a jogger passing by Highlawn Montessori School off Somerset Drive east of Corinth Square after 6 a.m. saw a body lying on the ground and called police to check on the person’s welfare. Officers arrived to find a young man suffering from a gunshot wound. Maquial was pronounced dead at the scene.

Investigators have blocked off traffic along Somerset Drive in both directions as they canvassed the scene. Washington indicated that it appeared some gunfire had struck the surrounding buildings. He stressed that there was no connection between the shooting incident and the school on which the body was located.

The Johnson County Crime Lab and the Johnson County Medical Examiner are assisting with the investigation. Police ask anyone with information about the incident to call the Prairie Village Police Department at 913/385-4603,or the TIPS Hotline at 816/474-TIPS.

Breaking news can develop rapidly, which means that information circulated at the outset of a situation is often incomplete or contains inaccuracies. As a policy, the Shawnee Mission Post will only publish information that is provided by investigators or that we are able to confirm independently. We will quickly update the post as we confirm new information and correct any information put into the public sphere that was not accurate.