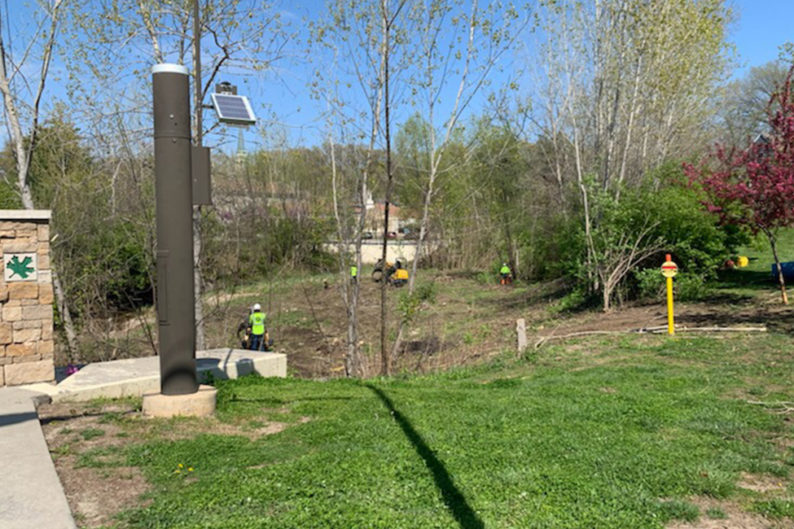 The initial tree clearing that sparked residents' concerns took place on April 15, and the city has not resumed since. But this one day of clearing effectively completed 80 to 85 percent of the city’s initial goals, Councilmember Dan Bailey estimated. Submitted photo.

Ward 2 City Councilmember Dan Bailey, who is serving as chair of the task force, added that the task force is an opportunity to “convey and share information about the stormwater mitigation maintenance in hopes of getting the residents on the same page” with regards to the original scope of the project.

“The goal would be to have the two residents (on the task force), who were nominated to represent their neighbors, be able to ask any questions, understand the scope of work, and understand the history of the area, too,” he added. “What I’d ideally like for the initial meeting to accomplish is to let the citizens see and understand what’s still left to be done before the crews were to come back in to finish.”

The initial tree clearing that sparked residents to push back took place on April 15, and the city has not resumed since. But this one day of clearing effectively completed 80 to 85 percent of the city’s initial goals, Bailey estimated.

Residents say this kind of information is what they hope to gain from the task force.

Jennifer Sheffield, Fairway resident and wife to task force member Robert Sheffield, said that they hoped to “get an understanding of what the initial plan was for what the city had in mind. Maybe what they had in mind wasn’t as bad as what we thought was going to happen. (But) that first initial clear cutting scared everybody.”

In addition, Sheffield hopes the task force will provide an opportunity to discuss which trees can be saved if the city moves forward with cutting, to put in place a long-term plan for upkeep along the creek and to create an education plan for private landowners about creek maintenance.

“Part of our property is on this creek — and we learned we should probably get rid of some of the honeysuckle we have,” Sheffield added. “No outreach has happened. So I’d like for education to be shared with everybody along the creek.”

Bailey also added that he hopes the task force will provide an opportunity “to start a dialogue as it relates to the future maintenance of the area.”