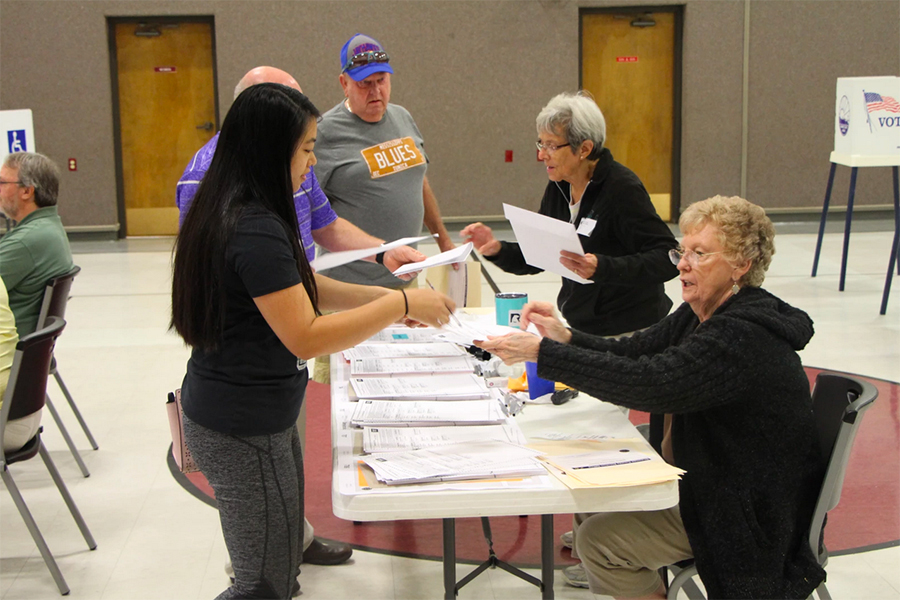 Polling places in Kansas are required by law to be open, but this year's primary and general elections might see fewer in-person votes and more by mail. The latter is a safe and convenient option in the time of coronavirus, but comes with its own costs and challenges. File photo credit Kansas News Service.

WICHITA, Kansas — Thousands of Reno County voters usually cast their ballots at the Kansas State Fairgrounds in Hutchinson, a central location with a high capacity.

Deputy Election Officer Jenna Fager said it’ll look different for this year’s August primary and November general election to avoid spreading the coronavirus. How different, though, she’s not sure.

“We’d have to consult emergency management and our health department and just, kind of, do the best we can,” she said.

Fager is one of dozens of county election officials in Kansas preparing for two possibly unusual elections — and an expected surge in voting by mail. Kansas law requires polling places to be open on election days, so counties are looking to stock up on disinfectants and protective gear. And unlike neighboring Missouri, voters in Kansas don’t have to have a specific excuse to request a mail-in ballot.

Though mail-in voting might be a safe and convenient option for voters, it also comes with its own costs and challenges.

“The cost of envelopes, paper ballots, and postage will likely be significantly more than we budgeted for those purposes,” said Marion County Clerk Tina Spencer, who oversees elections for the county’s more than 7,500 voters and eight polling places.

Spencer said the county election board will also likely have to meet once or twice per week in the weeks leading up to election day to process the additional advance ballots.

“We won’t be able to have as many voting machines in some of the locations as we’ve had in the past,” she told The Kansas City Star. “They will have to be spread out. That’s another reason why we’re encouraging people to vote by mail this time.”

It’s difficult to estimate what it would take for the entire state to run elections by mail.

“Elections in Kansas are conducted at the county level, and depending on the election, the ballot length, ballot weight and a number of other factors,” said Joanna Dolan, principal research analyst at the Kansas Legislative Research Department, “costs could vary from county to county and election to election.”

Sending applications to its more than 400,000 registered voters will cost Johnson County an estimated $120,000. They’re hoping they’ll be reimbursed with federal funds, which were made available through the CARES Act. Of the $400 million nationally, Kansas will receive just under $4 million, Kansas Secretary of State Scott Schwab said.

That money will help cover safety measures for polling places, like hand sanitizer, disinfectants and protective gear, as well as the additional postage and processing that’s expected with extra mail-in ballots.

The funds will also reimburse counties who have already incurred some of those expenses. Fager said Reno County secured protective gear and other materials for its polling places through local resources.

“We’re just kind of doing that on our own right now,” she said, “instead of depending on the state.”

With only two polling places and about 10,000 registered voters, preparations in western Kansas’ Seward County won’t be quite as cumbersome as others. The county is also fortunate that a 2002 resolution allows county employees to work polls, all but guaranteeing ample workers.

“You can be 16, 17 years old and still volunteer as a poll board worker,” Schwab said. “My son doesn’t know it yet, but my 16-year-olds will be working at the poll in the primary this year.”

Sedgwick County Election Commissioner Tabitha Lehman said that after multiple asks, only 228 of nearly 2,000 current and former poll workers have agreed to work the elections.

“We believe it is crucial that we work together to provide the best options to our voters moving forward,” she said.

Ahead of Georgia’s presidential primary in June, state election officials mailed almost 7 million mail-in voting applications to registered voters. Like what’s currently expected to happen in Kansas, polls will still be open, but officials want to limit how many people vote in person.

Schwab said his office is not currently planning to mail anything to voters statewide, and would rather leave the decision up to each county.

He said it’s unclear at this point how many Kansans will vote by mail in the upcoming elections, but that will become apparent as applications start to come in this summer.

Schwab said the state is also looking at drive-thru voting, which Missouri hopes to implement for its municipal elections in June.

“I’m a believer of (having) every opportunity and every way possible to vote that you can,” he said, “as opposed to a unilateral — you can only vote this way and no other way.”