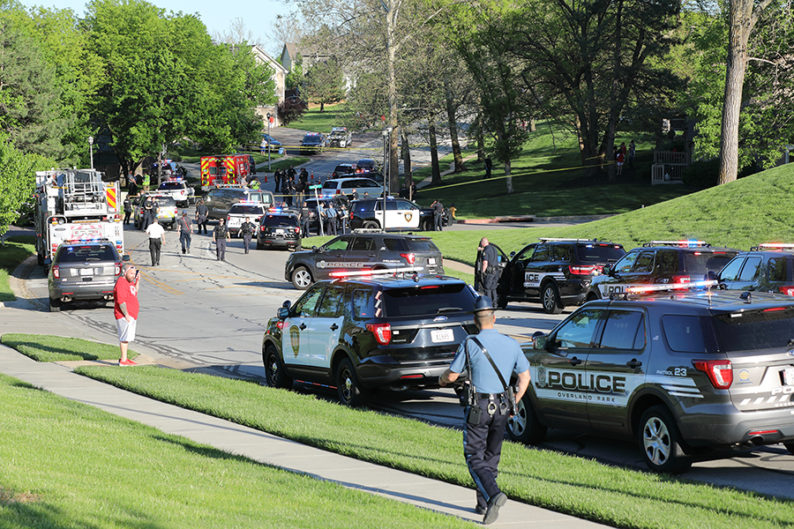 Officers responded in force to the scene of the altercation in the 8300 block of W. 123rd Street on Sunday just after 6:30 p.m. Officer Mike Mosher had followed the suspect after observing a hit-and-run several blocks away. Photo credit Mike Frizzell.

The man, who died at the scene of the incident, was Phillip Michael Carney, 38, of Overland Park.

Johnson County District Court records show Carney had faced charges of criminal damage, domestic battery and felony cocaine possession in recent years, though some of the charges were dismissed by prosecutors when he pleaded guilty to others.

He also faced a number of criminal charges in Douglas County stemming from the burglaries of a cigar shop and injuries he allegedly inflicted on law enforcement officers during his arrest, according to the Lawrence Journal-World.

Carney had been booked into Johnson County Jail three times since September 2017, most recently in February, when he was charged with registration violation.

The altercation that led to the deaths of Mosher and Carney was initiated when Mosher reported observing Carney’s vehicle involved in a hit-and-run accident at 143rd Street and Antioch. Mosher, who was on his way to an off-duty job, was in his personal vehicle, but was wearing his police uniform and had his radio with him. He followed Carney’s vehicle to 123rd and Mackey, where the shootings took place.

The community has been showing an outpouring of support for Overland Park police and Mosher’s family in day following his death.

“Words cannot describe the pain our [Overland Park Police Department]family is feeling with the loss of our brother Mike,” wrote Police Chief Frank Donchez on Twitter. “A true hero. The outpouring of support from both our community and law enforcement partners has been amazing. Thank you for being there for us.”