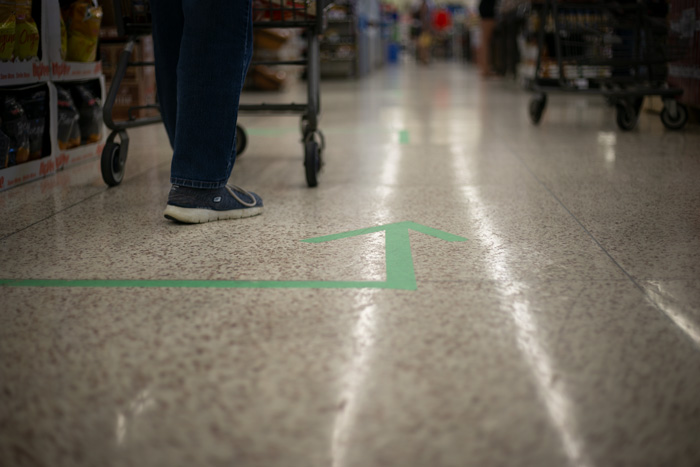 The petition argues that a “patchwork of inconsistent store-created policies” across the region have put essential workers in harm’s way during the pandemic.

A group of Roeland Park residents — who say they are frustrated with limited response from city, county and state leaders — have started a petition to secure protections for grocery store and big box store workers during the coronavirus pandemic.

Iser said while the group has noticed condition improvements since initially reaching out to city, county and state leaders, the lack of a protective order from the county and state puts essential store workers in unsafe conditions daily.

The petition, which currently has 125 signatures, argues that a “patchwork of inconsistent store-created policies” have put essential workers in harm’s way during the pandemic and asks that officials ensure that enforceable Centers for Disease Control and Prevention recommendations are in place at stores across the region. A few of the recommendations listed include:

A reported lack of safety measures at the Roeland Park Lowe’s was among concerns heard by the group. These include a lack overnight cleaning, and an absence of an ambassador to ensure social distancing and other safety measures are being followed — both of which are listed as COVID-19 response procedures on the Lowe’s website. The Roeland Park Lowe’s store manager declined to comment on this story, and no other representative from Lowe’s could be reached.

The petition’s top request is for elected officials to immediately create an order to secure protections for essential store workers and to keep that order in place through the state’s reopening procedures, Iser said. The order would ideally require stores to adopt CDC guidelines, she said. The second demand is to give essential store workers first responder status to provide them with benefits like paid sick leave, she said.

“We want to let [essential store workers] know that we see them and have been listening to their concerns that they have been sharing with us,” Iser said. “As community members, we want to do our part to make sure safety measures are in place for their safety and wellbeing. We appreciate their service, despite them not having signed up to face the daily risk and challenges of being an essential worker.”

Iser said the group intends to take the petition to the county and state once there is sufficient support, though they haven’t set a goal for petition signatures. Concerned community members who want to help can sign the petition themselves here or spread the word by asking personal friends and contacts to sign it, she said.

The city and county weigh in

Some grocery stores throughout the county have implemented safety measures such as limited hours and customers, special shopping hours for at-risk populations, and creating one-way shopping aisles, Mitchell said. The county is “doing all [it] can” to ensure resident safety, which includes providing recommended guidelines to businesses and including essential workers in COVID-19 testing.

“Essential workers have not had the same experience as residents who are staying home,” Mitchell said. “We expect that data to help inform future guidance on public safety, as well.”

Roeland Park Mayor Mike Kelly said the city appreciates residents having concerns about the health and safety of Roeland Park workers, and that this concern is what has guided the city’s actions during the pandemic. Additionally, Kelly said Roeland Park hopes city and county-wide actions “continue to help flatten the curve.”

The random testing of essential Johnson County employees resulted in no positive COVID-19 cases, which shows the social distancing and other safety measures “have helped to stem widespread infection in our area,” Kelly said. Roeland Park will continue to work “within [its] authority” and with its partners, he said.

“We’ve taken consistent, informed action within our authority,” Kelly said. “We continue to work with business leaders, public health officials, and state, federal and regional leaders to address how best to protect all who live, work and shop in Roeland Park.”