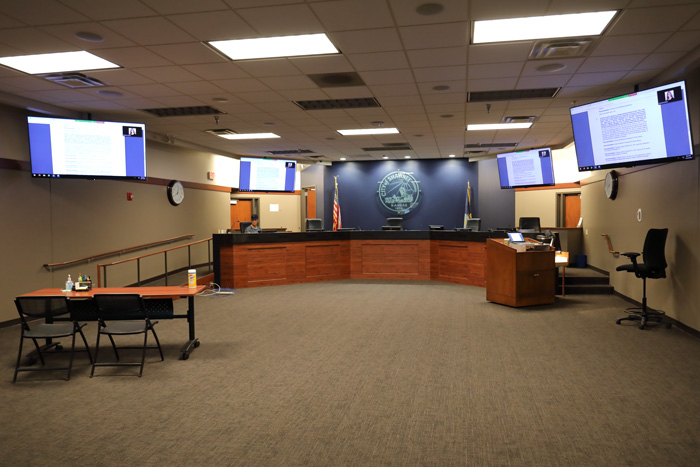 Faulty internet connections, challenges with audio equipment and failure to consistently identify speakers have made rough going of Shawnee’s remote council meetings, but city leaders and staff are working to meet the new challenges they face during the COVID-19 pandemic.

Shawnee city council meetings have been completely remote this month (unlike its March 23 meeting, when half of the council dialed in) and the city is using Zoom, a video conferencing tool, as the platform for public proceedings.

Access to the council meetings is only available via the audio livestream on the city’s website, streamed to YouTube, or by going to city hall and listening from the lobby outside of the council chambers, which is empty except for some city staff.

Meanwhile, the audio livestream of council meetings on the city’s website is often unintelligible, making it nearly impossible for members of the public to follow along. It hasn’t always been the case. Two years ago, the audio livestream was clear and easy to understand — but something changed over the past year and a half, and city staff say they are still trying to identify the cause and fix it.

Mayor Michelle Distler said she’s raised concerns about the audio quality and hopes city staff can address it soon. With many city staff members tuning in online, the issue has become more pronounced.

“We know it is not great and we are definitely working on fixing that,” said Julie Breithaupt, communications manager for the city.

Breithaupt said the city opted against publicly sharing the video links of public proceedings because they have security concerns with Zoom.

“We don’t want to get caught in a situation where people are joining that call because we put that information out to the mass public and then something happens that somehow breaches a security concern,” Breithaupt said. “We will never say that we are doing this perfectly, but it really is a priority for us to try to make these meetings as accessible as possible to our community, and we are really trying to do our best to make that happen, even though we’re in these really strange times.”

Many city leaders have their video turned off, or don’t have video capabilities, when using Zoom, Distler said, adding that there also may be some compatibility issues between Zoom and the city’s audio broadcast equipment.

Shawnee still allows 10 members of the public to physically attend council meetings, though seating is limited and spaced apart in the lobby outside of the chambers.

“We understand that there are members of our community who are not super comfortable with technology and might not have a computer, laptop or phone where they can easily click into the audio livestream,” Breithaupt said. “We wanted to make sure to provide a place for that, that we weren’t shutting out people if they didn’t have access to that audio livestream online.”

The city is also still grappling with using Zoom. During the past two council meetings, councilmembers and other speakers were unsure how to use Zoom and were occasionally muted or had faulty internet connectivity. This sometimes caused speakers to talk over each other. Some speakers and councilmembers were not recognized before speaking and did not identify themselves, leaving listeners to guess who was talking.

At one point Monday evening, the mayor missed three “no” votes on an item related to Shawnee Town 1929. Councilmember Kurt Knappen brought it up later, concerned the vote would be recorded as unanimous instead of 5-3.

The Shawnee city council normally does voice votes, or group votes, in which everyone calls out their votes simultaneously. The mayor states the results of the votes and names councilmembers who voted in dissent. Other cities have switched to roll call votes while meeting remotely, so each councilmember states his/her vote one at a time. The mayor said she’s “not opposed” to doing roll call votes.

Attorney General Derek Schmidt recently delineated requirements for public proceedings during the pandemic. K.A.R. 16-20-1 recommends identifying the results of the votes, but does not spell out that process.

Mayor Distler said she expects speakers responding to councilmembers’ questions to identify themselves, but she “will definitely try to do a better job” of recognizing who responded, so it is correct in the meeting minutes. She added that some councilmembers were unsure how to use the “raise hand” function on Zoom and were texting her during the meeting so she could help them figure it out.

“The process we’re using, I don’t have any concern about KOMA violations because obviously, everything we’re doing is transparent to the public,” Distler said. “It’s an ever-evolving process, and hopefully we can get back to business as usual sooner rather than later.”