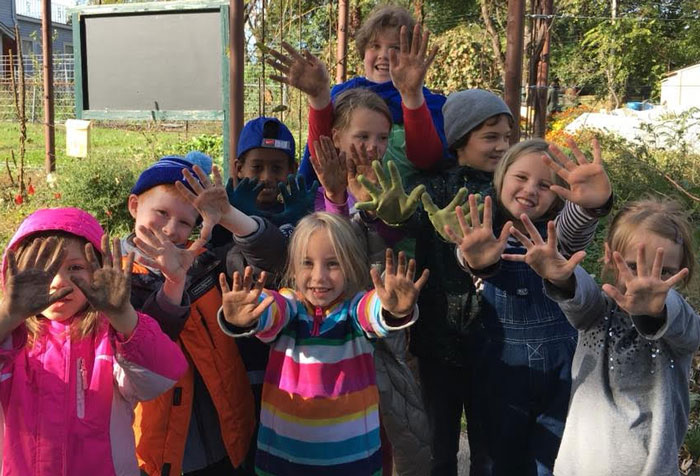 Community School #1 students stick their hands out as they pose for a photo. Photo courtesy of Brad Stowe.

Community School #1, a school that leases space from First Lutheran Church at 6400 State Line Road, will close after graduating its Class of 2020 in May.

Halfway through the 2018 to 2019 school year it was clear the elementary school did not have the enrollment numbers needed to sustain itself on tuition, though it received donations to stay open through the 2019 to 2020 school year, President Brad Stowe said. The school never fully recovered from the 2008 recession, even after switching to a nonprofit model in 2013, he said.

“Parents have been less likely to pay private school tuition, so the days of CS1 having a waiting list are kind of long gone,” Stowe said. “Now, we have a lot of competition from charter schools, and many of them are using kind of a similar model: It’s a small, arts intensive elementary school.”

CS#1 has had enrollment of up to 20 students before and Stowe said a “doable” enrollment is 16. Although the impending closure has been no secret, Director and Lead Teacher Linda Powers said the inability to meet in person due to COVID-19 has added to the challenge of saying goodbye to the school she’s been part of for nearly 13 years.

Original farewell plans included an open house night for CS#1 alumni to visit, and the older students traditionally take an end-of-the-year camping trip, Powers said. Once CS1 gets an idea of when it will be safe to gather in groups again, celebrations will be put on the calendar.

Canceled events and traditions aren’t the only hit CS#1 is taking amid its closure and COVID-19: Powers said one of her students started crying during the daily Zoom meeting because of how things are coming to a close. She said she’s been trying to help the children through their frustration and sadness in ways that encourage hope and optimism, but it’s been challenging.

“It’s already been an incredibly heartbreaking and a wrenching decision to close our doors, and this definitely is adding insult to injury,” Powers said. “We’re just not able to do it in a way that we had anticipated and had wanted to do.”

CS#1 originated as a private school in 1972, and has undergone two name changes and three directors since then. It is a one-room schoolhouse that believes children learn by doing, and teaches children within the 5 to 12 age range, according to its website.