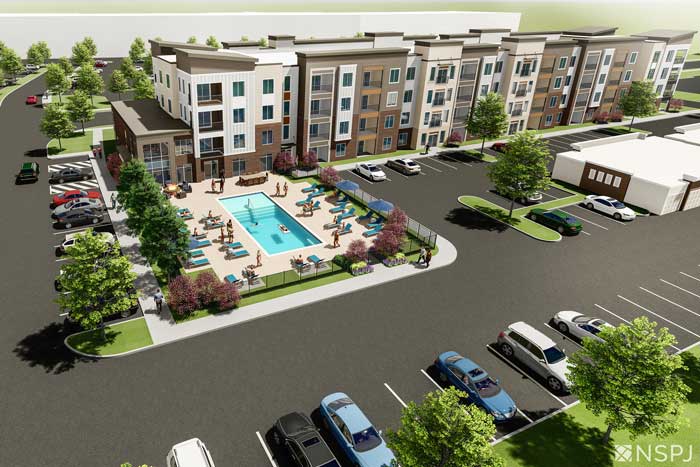 A rendering of the residential component of Bellmont Promenade. The project includes about 150 apartments, pad sites for restaurants and space for inline retail. File photo.

Despite concerns with a weak market for issuing bonds on private construction during the COVID-19 pandemic — and a certain level of disdain from some city leaders opposing public financing incentives — the Shawnee city council last night advanced plans for Bellmont Promenade, a retail and residential development.

Located on 26 acres at the southwest corner of Shawnee Mission Parkway and Maurer Road, Bellmont Promenade comprises of:

Representatives with the Kutak Rock, the city’s bond counsel, noted that there’s no market for bond issuance at this point for the project due to the economic downturn caused by COVID-19. Some councilmembers had concerns about that. However, John Hansen with Legacy Development said they can wait and issue bonds when the market improves.

“There is very good reason to believe that the market will come back,” Hansen said. “No one… can state precisely when and to what degree. Your actions tonight will allow us to be poised and ready to take advantage when the market comes back. There’s always some point at which someone will say this just isn’t going to happen, but we are a pretty optimistic crew over here on the development team.”

Financing for the project includes a public incentives package with a 90% TIF property tax, 1% TIF city general sales tax, sales tax exemption for $3 million to $3.5 million in project costs, a 1.6% CID sales tax, CID special assessments, and the issuance of $19.5 million in special obligation bonds. The proposed development has undergone several delays as Legacy Development, the commercial developer, worked through multiple iterations of the residential and retail components. At various stages, neighbors whose properties abut the site have pushed back against the height, proximity and density of the residential/apartment portion.

Meanwhile, the total cost of the development has decreased from $98 million to $80.5 million, while the percentage of the public incentive contribution to the project has increased from 19.9% to 24.2%, according to city documents.

Councilmember Mike Kemmling also said he wanted assurances that the developer would stick with completion of the project, even if the TIF and Community Improvement District failed to generate anticipated revenue.

White said the city will have the right to cause Hawthorn Bank, which is handling the project’s finances, to enforce a completion guarantee for the project once it’s started.

Editor’s note: This story has been updated to correct an error. Jeff White works with Columbia Capital Management, not Kutak Rock.