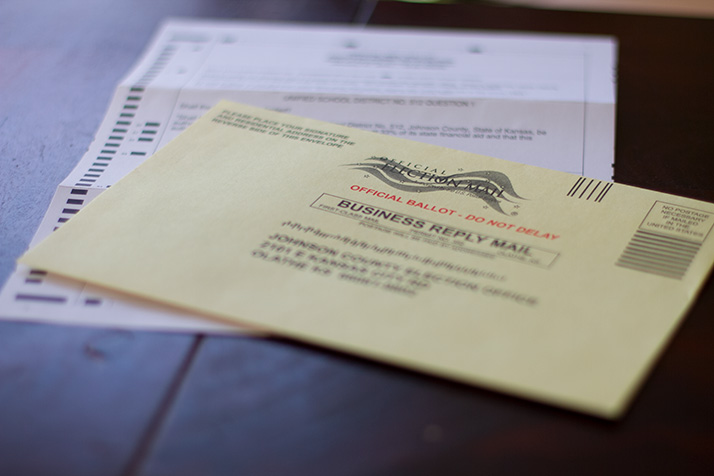 Interest in mail-in voting is so high this year that the Johnson County Election office is for the first time ever getting ready to send out ballot applications to every voter in the county.

Election Commissioner Connie Schmidt said Thursday the office will promote the mail-in ballots through social media and other outlets because of voters’ concerns over exposure to the novel coronavirus.

Schmidt told the county commission Thursday that state law requires in-person voting to be offered when there are candidates and not just referenda on the ballot. State leaders have said they have no plans to change that for this pandemic year, she said.

The state does allow mailed ballots upon request, though, and voters need not provide a reason for doing so. But voters have to fill out an application and send it back, along with a signature and an ID number.

Voters should start to see their applications in mailboxes in mid-May, Schmidt said.  There will be forms for both the August primary and November general election.

Although the ballots can be requested early, they can’t be mailed out until 20 days before the election. They have to be received by the election office no later than three days after Election Day, with a postmark before the Election Day.

There will still be in-person voting, but it will be a different experience this year because of distancing guidelines, she said.

Advance in-person voting will still be offered at the same seven locations, but some Election Day polling places may change. For instance, senior living centers will no longer be polling places, to prevent spreading coronavirus into those facilities, Schmidt said.

Other procedures may also change. Because of distancing requirements, there will likely be fewer voting machines available and the county is reviewing best practices for cleaning them. The election office is also working with other county departments to get masks, gloves and hand sanitizer to protect voters and poll workers, she said.

In-person poll worker training will also be converted to online webinars whenever possible, she said.

In a reversal of long-standing practice, the county will begin accepting partial payments on property taxes due May 11.

When that due date rolls around next month, property owners can pay a lesser amount of their choosing instead of the full bill. If they own real estate, that gives them until July 31to pay the full amount and avoid having their names published as late on taxes. Personal property owners have until Oct. 1.

The change will be most noticeable to those who own their property outright. People still making mortgage payments have their taxes worked into the escrow amount.

Late payers will be charged interest, however. The interest rate varies depending on the type of taxes and the amount due. For instance, the annual rate for real property is 11 percent for taxes under $10,000 and 15 percent for taxes $10,000 and more. County Treasury and Finance Director Tom Franzen said the rates also apply to those who do not make a partial payment before May 11. Those people can still avoid having their names published if they make the entire payment on or before July 31, though.

The interest rate for partial payment on personal property tax is 6 percent if taxes are under $10,000 and ten percent if they are $10,000 and above. State law governs those rates. More information can be found here.

People who are delinquent past Aug. 1 have to pay a $15 publishing fee for being named in the newspaper. Delinquency past three years makes the property eligible for foreclosure and sale.

Property owners had been able to pay taxes twice a year, but smaller payments, such as monthly installments, have not been previously allowed. But because of concerns over the recession caused by business restrictions meant to reduce the spread of the coronavirus, county officials decided to accept the smaller payments.

“I know that this news will be very welcome to a number of people that I’ve heard from who are desperate, and concerned about paying their property taxes by May 11,” said Commissioner Janeé Hanzlick.

Commissioners also learned that the county has just received $116 million in federal stimulus money to add to other funds. But restrictions on how it can be spent may keep it from helping the county’s current budget situation much in the near future.

“It’s not quite time to jump up and down yet until we have some more information,” said Hanzlick.

Funds that the county receives have to be used for direct expenses related to the pandemic and can’t be used to fill holes in the budget, per the federal rules, said Deputy County Manager Maury Thompson.

“As we all know that’s what our real issue is right now,” Thompson said.

The county has received $364,000 from the federal government already from federal sources and had $471,000 in Covid-19 related expenses.

There are also questions about how and whether funds would be sent to cities. Commissioner Becky Fast said it isn’t clear whether money that goes to the bigger counties has to be passed along to cities, because cities may be getting their own direct allocations. She urged caution in spending because if the money isn’t handed out according to federal rules, the county may be obliged to give it back, she said.

While officials await clarification, the money will stay in the county’s coffers, Thompson said. In the meantime, a careful accounting will be made of what the county’s directly pandemic-related expense, he said.