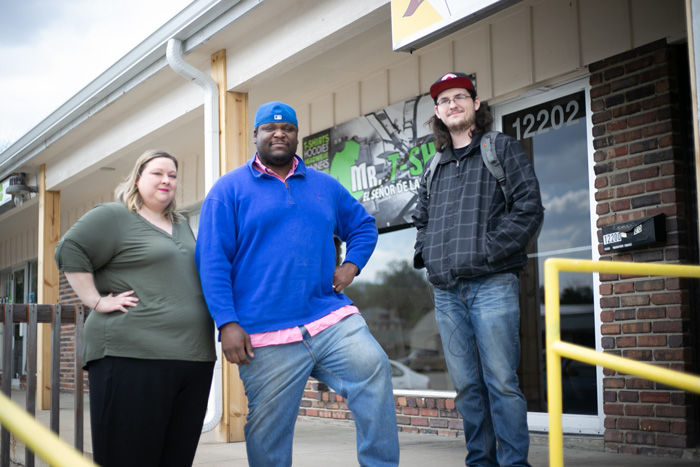 Jessica and Lonnie Crayton (left and center), owners of Harley's Hideaway Bar & Grill, and their chef, Brian Hall, plan to offer a healthy spinoff of traditional bar food at the new restaurant, which is coming soon to 12200 Johnson Drive, in Shawnee.

Located at 12200 Johnson Drive, Harley’s was originally slated to open May 15, but the pandemic could affect those plans.

Owners Hulon “Lonnie” and Jessica Crayton, an Olathe couple, plan to turn the space into a traditional bar and restaurant, featuring live events — stand-up comedy, trivia nights, acoustic music, etc. — that bring the community together. They also plan to add an outdoor patio for seating.

“We want a chill, relaxed space, kind of like a speakeasy,” Jessica Crayton said, adding that they named the restaurant after their dog, Harley. “We really want that Coach’s feel: That neighborhood place that you can go and hang out, have good drinks, have great food.”

If the restaurant opens during the COVID-19 shutdown, the Craytons plan to offer curbside pickup and catering options.

Lonnie Crayton said opening a restaurant has been his lifelong dream. And as a former football player who’s adjusting his diet to match a less strenuous lifestyle, he plans to offer healthy dining options.

The menu will include vegan, vegetarian and low-carb options along with traditional bar food like wings and potato skins. And it will definitely include pizza (his favorite food).

“I’ve always been a big eater, I used to play football so food is kind of a thing that becomes more than just a need,” he laughed. “A lot of former athletes end up with health problems; I’m not trying to be one of them.”

Lonnie also noted the menu will be influenced by his multicultural background and include spinoffs of family recipes.

“I’ve got a huge mix of cultural dishes that I’ve adapted over the years,” he said, noting he’s lived in 17 different places across the country.

Jessica Crayton said they wanted to create a place that provides options for everyone, including those on alternative diets.

“We realized that there was really not a place that people could go that was a bar setting that allowed for a healthy food option,” she said. “We’ll have something for everyone.”

The Craytons said they’re thankful for Shawnee city staff’s support in helping them get started.

“The city of Shawnee has been nothing but phenomenal to us,” Jessica said. “They were just very welcoming.”

Tentative hours of operation are 11 a.m. to midnight, seven days a week.