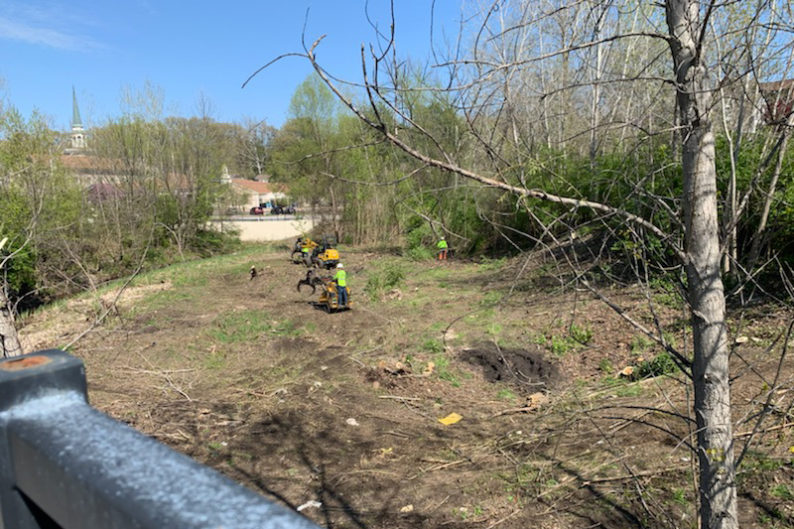 The initial tree clearing that sparked residents' concerns took place on April 15, and the city has not resumed since. But this one day of clearing effectively completed 80 to 85 percent of the city’s initial goals, Councilmember Dan Bailey Bailey estimated. Submitted photo.

Fairway has temporarily halted removal of dozens of trees along the banks of Rock Creek after homeowners on adjacent properties raised concerns last week.

The group of Fairway residents say they were not consulted on or made aware of a city flood mitigation project that involves clearing large swathes of trees and brush along Rock Creek between the Mission Road bridge and Kansas City Country Club.

A crew of arborists commissioned by the city cleared approximately a quarter of an acre of trees and brush from the area on Wednesday.

“I came home from work at 5 (on Wednesday), and I was shocked to see that wetlands and riparian areas were clear cut,” said Taimoor Nana, a Fairway resident who lives near the creek.

“There’s a lot of dead stuff at the creek bottom, (and) I thought they were going to take that out,” said Doug Wood, another resident who has lived next to the creek for 8 years. “But they kept cutting. And then I thought, well, I have no idea where this is coming from.”

After receiving emails and calls from concerned citizens, Mayor Melanie Hepperly wrote in an email that the city has halted the project and will not restart before April 27.

City Administrator Nathan Nogelmeier noted in an email that the decision to remove the trees was “discussed during several public meetings” throughout the spring and summer of 2019, during the development of the 2020 budget.

However, residents living alongside the creek near the Mission Road bridge said they hadn’t known this was coming, despite the suggestion from a 2018 Burns & McDonnell flood mitigation report prepared for Fairway that the city “consider a public outreach program for the property owners along Rock Creek” if they underwent vegetation clearing.

“In hindsight, some form of notification should have been sent and we acknowledge that,” Nogelmeier wrote.

Nogelmeier wrote that removing the trees was a way to lessen the flood risk for residents upstream. This flood mitigation strategy of vegetation clearing was recommended in the 2018 Burns & McDonnell report.

“During spring and summer storms the risk of damming (slowing the flow of water) in this area was elevated due to the density of the vegetation,” he wrote. “If the flow of water was slowed, it could negatively impact upstream residents.”

Several cities in northeast Johnson County, including Fairway, Prairie Village and Leawood, faced intense flooding in 2017. The northwestern corner of Fairway has particularly struggled with flooding from Rock Creek, which was a key issue in the 2017 elections for mayor and the city council.

Residents who live near the tree clearing project fear the destruction of the trees and brush because they provide a physical barrier between their homes and pollution from nearby Shawnee Mission Parkway, as well as a habitat for wildlife. Nogelmeier wrote that the city did not conduct an environmental impact study because the city was returning to the area post-construction of the Mission Road bridge.

“We hear owls at night, flying through the creek area and catching their food,” said Jennifer Sheffield, another Fairway resident who lives near the creek. “I don’t know where they would go.”

They are also concerned the project could impact private property if it cuts too far into the hill on the southwest side of the riverbank that functions as several residents’ backyards.

But Nogelmeier wrote that the city is only working in areas that Fairway owns or in areas with which the city has a permanent drainage easement. This includes Old Mission church property, which is located on the northeast bank of the creek.

Gay Ecton, the administrator for Old Mission Church, said she was notified about the tree clearing about 6 to 8 weeks ago by the city. The arborists used the church’s parking lot to offload equipment and park vehicles.

Moving forward, the residents and the city will work together to complete the flood mitigation effort, Hepperly added in her email. Some residents are working to create suggestions of their own for how the project can proceed.

“I’m going to be working with conservation groups and putting a plan together that mitigates the flooding concerns the city has while building a native riparian environment with native plants and trees,” Nana said. “So it’s a win-win for both the city and residents.”