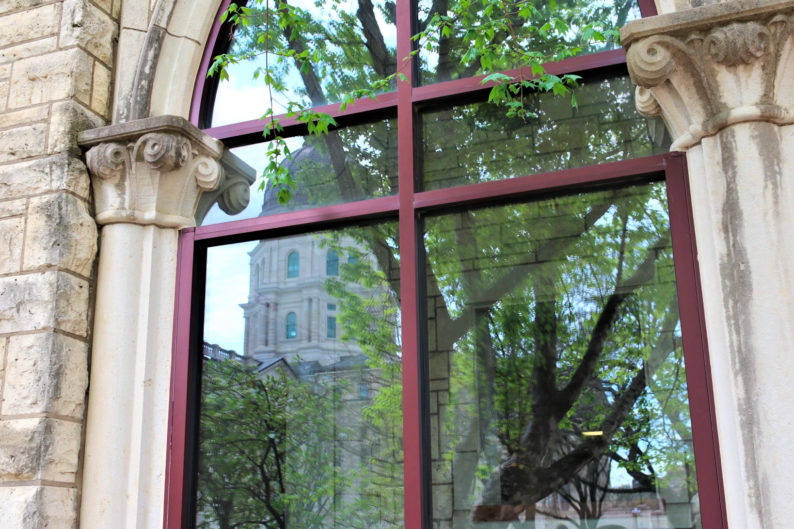 The Kansas Statehouse as seen in the window of a nearby church in Topeka. Photo credit Jim McLean/Kansas News Service.

The judge sided with the First Baptist Church in Dodge City and Calvary Baptist Church in Junction City, which had argued in a lawsuit that Kelly’s executive order was an unconstitutional limit on the right to exercise religious freedom and went against the Kansas Preservation of Religious Freedom Act.

A separate hearing for a preliminary injunction, which could put a hold on the entire executive order, is scheduled for Thursday.

Kelly’s intent with the executive order was to slow the spread of the new coronavirus, of which the state has almost 1,800 cases and 80-plus deaths. Church services and funerals were added to the list of restricted gatherings on April 7. The state health department has noted that religious activities have led to a few COVID-19 clusters.

In issuing his temporary restraining order, Judge John Broomes said the churches had sufficiently showed “a live controversy exists” and that Kelly’s lawyers hadn’t accounted for why airports, public transportation and production facilities, among other things, weren’t beholden to the same limitations on the number of people who could gather. The orders, he said, “carve out broad exemptions for a host of secular activities, many of which bear similarities to the sort of personal contact that will occur during in-person religious services.”

He also said that “a fair reading of (two of Kelly’s executive orders) shows that they operate as a wholesale prohibition” for religious services anywhere in the state with more than 10 people. Broomes noted that the orders “will likely impact the majority of churches and religious groups in Kansas.”

NPR reported that similar lawsuits over religious liberties issues have been filed in several states, including Kentucky, New Mexico and Virginia. Kelly referenced those court challenges in a statement late Saturday, saying “courts across the country have recognized that during this pandemic emergency, the law allows governments to prioritize proper public health and safety.”

“This is not about religion. This is about a public health crisis,” Kelly said. “This ruling was just a preliminary step. There is still a long way to go in this case, and we will continue to be proactive and err on the side of caution where Kansans’ health and safety is at stake.”

Broomes, who was appointed by President Donald Trump and confirmed two years ago, laid out 24 protocols to protect the two churches’ worshipers, ranging from deep cleaning the buildings before and after services to keeping maximum social distancing practices to advising that all attendees have their temperatures taken upon entering a building.

Kansas Attorney General Derek Schmidt said in a statement that while he personally believes all religious organizations should only worship remotely, not in-person, he called the ruling “a much-needed reminder that the Constitution is not under a stay-home order.” Schmidt also said Kelly should “accept the court’s decision” and stop spending money on the legal fight.

The governor’s executive orders are made possible by a state of emergency declaration that ends May 1, unless lawmakers extend it. The expiration date, Kelly’s chief counsel said recently, also means that the statewide stay-at-home order, which allows only essential business to occur, ends May 1 instead of May 3 as the governor wishes.

Brian Grimmett with the Kansas News Service contributed to this report.

Erica Hunzinger is the news editor of the Kansas News Service. You can follow her on Twitter @ehunzinger or email her at erica (at) kcur (dot) org.