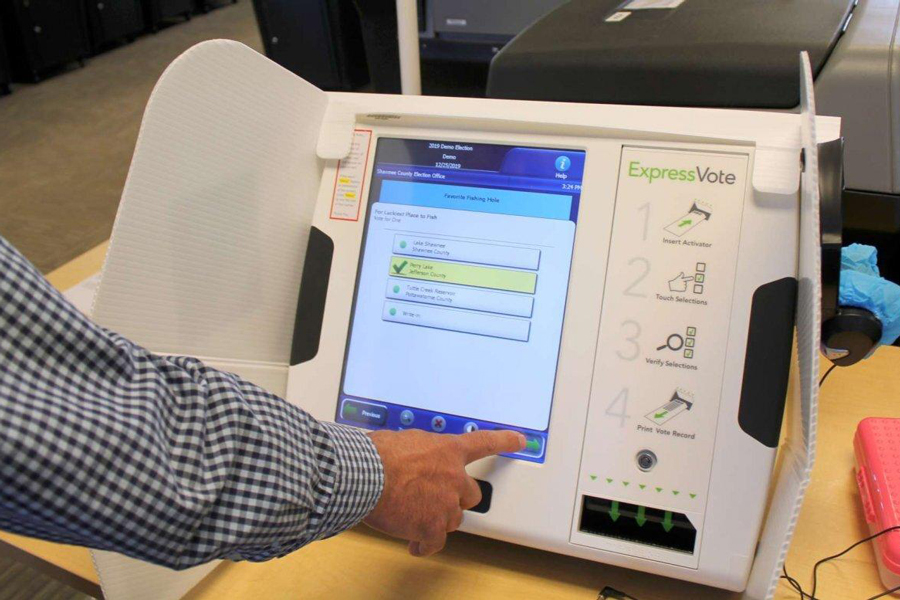 LAWRENCE, Kansas — Tobias Wood is thinking twice about working at a polling place in Shawnee County this year. He’s done it since 2018, but now he’s practicing social distancing to help slow the spread of COVID-19.

He knows that might be difficult during elections, when he needs to handle people’s IDs and have voters sign in on a tablet.

“We don’t have control over what people come in with,” he said. “That’s something that really scares me.”

Kansas’ late primary — Aug. 3 — puts it in a less urgent position to either postpone it as Missouri and other states did, or go forward with fewer polling places like Wisconsin. It’s why Secretary of State Scott Schwab is avoiding major changes like rescheduling election dates.

“You’ve got to be really careful because you’re going to create voter confusion if you move the day,” said Schwab, who hopes the virus will have largely run its course by August. “That’s the biggest thing we’re trying to avoid is voter confusion.”

But there’s more to it: The new coronavirus is striking at a time when political candidates would normally be knocking on doors, shaking hands and speaking at public events. Kansas’ political parties are trying to fundraise and prepare for national conventions, one of which has already been moved back.

Kansas Democrats already changed their May 2 presidential primary to mail-in only. Schwab is urging people to request mail-in ballots if they have concerns about going to the polls.

But there also are ways, he said, to space out voting machines and take other steps to comply with social distancing if it’s still needed.

“The biggest way to get more social distancing is for counties to offer more polling places,” he said.

Plus, Schwab is concerned that poll workers like Wood will sit out the August primary and November general election, which is why Kansas is looking to ramp up recruitment of poll workers.

More polling places and more workers comes with a cost. States have access to $400 million through the coronavirus response bill. But Vanita Gupta, president and CEO of the Leadership Conference on Civil and Human Rights, thinks it’s not enough “for states to prepare for November and provide voters with a range of options for casting ballots.”

Her group is a coalition pushing for civil and human rights in the U.S., and it has joined others like the Brennan Center for Justice in asking Congress to approve another $1.6 billion to help states make changes in advance of the election. They’re asking Congress to include that in any additional coronavirus legislation, and the issue has come up in talks about future legislation.

The Brennan Center is also urging new policies to make voting more accessible during a pandemic. Some of the suggestions are already in place here, like online voter registration, early voting and mail-in ballots. But Kansas does not have online requests for absentee ballots or same-day voter registration.

Meanwhile, Kansas political parties are not waiting to make some crucial changes.

Kansas Democrats were gearing up for their first presidential primary, transitioning from a caucus system to a statewide ranked-choice ballot. But the coronavirus upended the party’s plans to accept mail-in ballots and open 50 in-person voting locations.

Instead, about 400,000 registered Democrats will receive a ballot in the mail.

“It’s certainly a difficult decision,” Kansas Democratic Party Executive Director Ben Meers said. “We were in a great place. Where other states had to postpone their elections, we were able to pivot to a vote by mail election.”

And Kansas Republicans had a deadline to elect their delegates for the national convention, so with short notice, they moved the process online to a Zoom meeting.

Leaders from both major political parties in Kansas say campaigns are replacing in-person town hall meetings with online or telephone gatherings. Similarly, fundraising has shifted more online and volunteers are working from their home rather than from a campaign office.

Campaigns also are shifting to advertising more online instead of TV.

Kansas Republicans had to quickly move the selection of delegates for the national convention online by Zoom meeting instead of in-person gatherings.

But there’s still some optimism that in-person and retail politics will resume as the August primary approaches.

“Hopefully, we’re back out there able to go with normal business, come June and July,” Golden said. “Obviously, we’ll have to see what happens.”