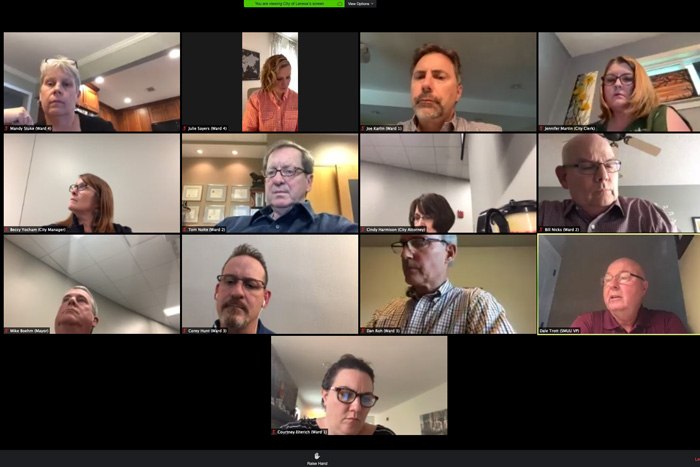 Size restrictions put in place to slow COVID-19 spread have forced local governments to adjust how they hold meetings. Many, like the Lenexa City Council pictured above, have opted for remote meetings using software like Zoom or GoToMeetings.

Local government has been shoved and shoved hard by the coronavirus outbreak. And yes, things are bad.

But in one way, the pandemic is having a positive effect. It has pushed councils, boards and committees hard into the technology of the 21st Century. Elected officials, usually constrained by five-year plans, the bidding process and endless committee meetings, have been thrown headfirst into the world of virtual meeting apps.

Suddenly, there’s not enough time for preliminary discussions and staff investigations. Officials are forced to just try them out. And — temporarily at least — government has become a bit easier to access because of it.

Meetings from even the small cities are available to watch from home. Roll calls are being done where voice votes used to suffice. And soon, some viewers may be able to offer public comment without leaving their computers.

The statewide emergency order issued by Gov. Laura Kelly two weeks ago does not excuse governing bodies from meeting, and the meetings must be open. But since then cities have been grappling with how to do that then the order limits gatherings to ten in a room, spaced six feet apart.

Some, like the Johnson County Commission, started out by removing chairs from the visitor’s section, spacing elected officials farther on the dais and inviting staff into the room one at a time to give their presentations.

The commission eventually gave that up in favor of remote meetings with commissioners speaking from home or from different rooms. The Shawnee City Council still meets that way, with visitor chairs appropriately spaced in the lobby.

Visitors are encouraged to stay home if they can, and business is kept to a minimum. However tonight all members of the council have decided to call in, with a staffer on hand to set up the live stream and connect the conference call.

It’s a little more problematic with a larger group, though.

The Overland Park City Council has twelve members, plus the mayor and a large staff that is usually called on to make presentations. It would be difficult to fit everyone participating into the room, let alone onlookers, and still keep everyone at six feet apart.

Whatever improvising local officials do, though, is restricted by the Kansas Open Meetings Act. As the stay-at-home order began, state Attorney General Derek Schmidt laid down some particulars for how meetings could be held and still be considered open.

For remote meetings, there has to be a cost-free option (usually a phone connection) in addition to whatever internet hookup is provided. Officials have to provide an agenda, outline rules for any public comment that’s offered, state their names before speaking and announce the results of votes.

Many of the bigger governing bodies – Overland Park, Shawnee, and the county commission – already have video or audio meetings and live streaming. But the expense makes that harder for small cities. Nevertheless, even cities like Westwood and Westwood Hills now find themselves on line via remote meeting apps.

Zoom has proven to be most popular, although Westwood Hills and Roeland Park use GoToMeetings. The apps are generally much cheaper than video tools used by cities, but they don’t have the same capabilities.

There have been hiccups. Sound breaks up if the Wi-Fi signal is weak, people forget to unmute their mics when they want to talk, there are lags. But elected officials who have used them say they are learning.

Roeland Park had video recorded meetings but only started live streaming since the stay-at-home order. “There are certainly some growing pains with using the app and we’ve had some technical difficulties for sure,” said Assistant City Administrator Jennifer Jones-Lacy. “However, I think we’ve made the best of the situation and have several practices in place to try to account for the technical difficulties, like having everyone log on early to test.”

Overland Park had its first Zoom meeting April 6, and Mayor Carl Gerlach said he was pleased with the technology. Merriam and Lenexa will get their chance to try Zoom this week.

There are still some wrinkles to iron out, most notably public participation. The county commission, for instance, usually has a public comment period near the beginning of its meeting when anyone can talk about non-agenda concerns. But that’s been suspended for the time being while officials learn the technology. The county and most other local governments have been asking people to submit emails where once they would have stood in the meeting room.

In Overland Park, council members have agonized over the rules for open mic time for months and only just gave it final approval at the April 6 meeting. But they’ve decided to hold off on public comment until they can figure out how to make it work with Zoom, Gerlach said.

Westwood encourages its residents to submit emailed questions, said Mayor David Waters. But he didn’t rule out allowing a comment if someone happens to chime in during the meeting. “We might play it a little bit by ear,” he said.

Roeland Park also will allow public comments at the usual time, but has asked commenters to tell the city in advance.

Public hearings, though, are required by law on such things as the budget, public financing on development, and land use. Because of questions about how public hearings can legally be done most cities and the county have managed to put off public hearings that were scheduled for March.

But since no one knows how long the social distancing will last and since public hearings often come with deadlines, finding a way to do public hearings is now at the top of many cities’ to-do lists.

Lenexa is testing Zoom capabilities for a try-out on Tuesday. Overland Park officials want to be able to have a public hearing on April 20. Fairway is also checking into it.

The attorney general notice doesn’t mention whether the public hearings held over remote meeting apps would fulfill the legal requirements. “There’s no answer right now,” said Wes Jordan, city administrator for Prairie Village. The city is evaluating whether Zoom could provide the kind of real-time dialogue needed for public hearings, or whether some sort of webinar would be better.

“Everybody is trying to do what’s right,” Jordan said.

Overland Park has had some public hearings in the past – notably the Brookridge development – that have attracted overflow crowds. Keeping an orderly meeting going with that many attendees would pose problems the city will need to work out, said Gerlach. In any case, since public hearings are legally required, they have been prioritized over the open mic type of public comment, he said.

Waters, of Westwood, said the experience may end up changing how cities do business down the road. “Personally I think it’s a direction every city will be moving toward. It’s an expectation of the public,” he said.

Gerlach agreed. “This is the direction from a technology standpoint we were all heading,” he said. “I think it’s moved faster just because of the coronavirus.”

The changes have for sure come a lot faster than usual. The switch to remote meetings might have taken months during normal times, because so many stakeholders have to be consulted, he said.

“These changes are good,” he said. “To me that’s going to improve government and improve communication with the citizen’s and that’s what’s important.”