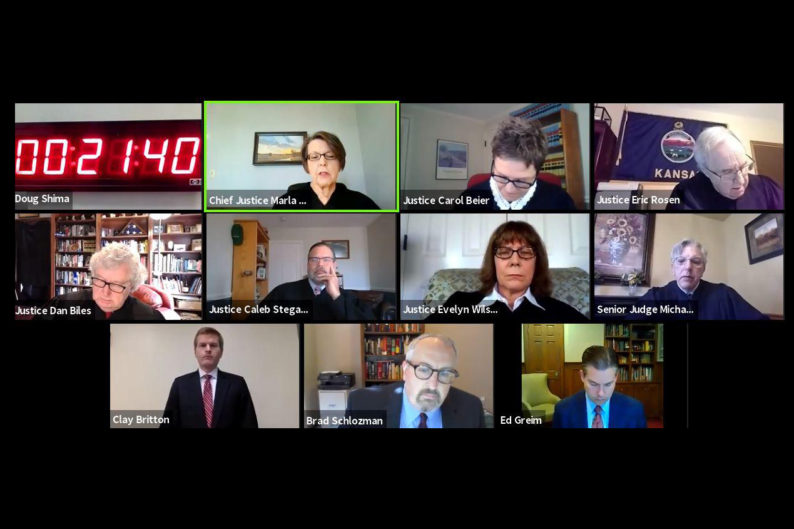 The Kansas Supreme Court met remotely, in line with recommendations on containing the coronavirus, to rule on whether the governor can impose limits on church and funeral services to quell the pandemic.

TOPEKA, Kansas — Democratic Gov. Laura Kelly won a ruling from the Kansas Supreme Court Saturday that said she holds sweeping powers to shut down operations in the state, including large church services, in the face of a public health crisis.

The high court said that a panel of legislative leaders lacked the power to reverse Kelly’s controversial limits on church and funeral services. She had said the action was needed to respond to the spread of COVID-19.

That meant that late on the night before Easter, Kelly’s order banning church gatherings of more than 10 congregants remained in force.

The ruling forced the justices to weigh in on an issue that tangles together politics, religion and debate about the powers granted to a governor when a deadly pandemic strikes.

But the court took pains to say it only looked at what powers had legislators surrendered to the governor to deal with the pandemic after they took a recess in early stages of the disease spreading through Kansas.

The ruling made clear the justices would not weigh in on the issue of whether Kelly violated religious freedoms protected by the First Amendment in her order.

At issue was whether the Legislative Coordinating Council, or LCC, overstepped by trying to quash the governor’s ban on large religious services.

“The LCC purported to revoke one executive order. We are asked to determine whether it acted within its lawful authority,” the court said in an order released about 9 p.m. Saturday. “We hold that it did not.”

Yet the legal arguments hashed out in a Zoom video conference call some 12 hours earlier centered mostly on whether a subset of legislative leaders could speak for all lawmakers and overrule emergency actions by the governor. They also explored whether drafting errors in the legislation could be overlooked in an emergency.

The back-and-forth between the justices and the lawyers for both sides seemed to reveal at least some consensus: In a rush to leave Topeka and give Kelly powers to respond to a fast-spreading, sometimes deadly illness, the Legislature made critical errors in a resolution.

Yes, lawmakers had temporarily granted emergency powers to the governor. But it was far less clear how much authority they handed off to the Legislative Coordinating Council, a committee of legislative leaders controlled by Republicans, to keep Kelly in check.

A delegation of power of that magnitude, said Justice Dan Biles, can’t be accomplished with just a legislative resolution. The law defining the role of the LCC would have to be amended, something lawmakers failed to do.

“You’re trying to read language into a statute that’s not there,” Biles said to one of the lawyers pleading the Legislature’s case. “While it may be a good idea, all you guys had to do was amend the law and send it to the governor.”

On Tuesday, Kelly expanded an existing ban on public gatherings of more than 10 people to include church services and funerals. On Wednesday, the Republican-controlled LCC voted to overturn that executive order. Then on Thursday, Kelly sued and asked the state Supreme Court for a quick ruling.

“We agreed to expedite these proceedings due to the nature of the public health emergency all agree is present,” the court said in its ruling.

The justices kept their decision narrow. It says LCC lacked the power to revoke Kelly’s order. The resolution hastily drafted by lawmakers said their leadership could reverse special action by the governor, but not yet.

Instead, the court ruled, the LCC would only gain that power to wipe out an emergency order by Kelly after the state finance council extended the emergency declaration. The original declaration hasn’t expired yet, so it didn’t need an extension.

So, by the terms the Legislature set down, the LCC is powerless undo an order by the governor.

“We’re restricting individual rights to practice religious liberties,” Wagle said before joining the other four Republicans on the seven-member LCC in voting to revoke Kelly’s directive.

Wagle questioned why Kelly’s order applied the 10-person limit to churches and funerals but not to abortion clinics.

In a joint statement, the Republican leaders said clergy should voluntarily comply with policies aimed at protecting the health of their congregations. But, they said, “Kansans should not be arrested for practicing their faith.”

“The last thing I want right now is a legal battle,” Kelly said, “but … Kansas lives are on the line and I took an oath to uphold and defend the Constitution.”

On Saturday, an attorney representing the governor’s office argued that Kelly needed broad powers now to fight the spread of COVID-19.

“This is a time of unprecedented crisis and danger. Lives are on the line. Every day counts. Every minute counts,” said Clay Britton, Kelly’s chief counsel.

Both sides in the fight accused the other of politicizing an issue that demanded more sober thought.

Lee Norman, the state’s chief health official and a Kelly appointee, backed the governor. Norman said in a tweet that GOP leaders played politics when the restrictions Kelly imposed showed signs of slowing the virus.

Arguing before the Supreme Court on Saturday, lawyers representing the governor argued the LCC did not have the legal authority to overturn the order. That power, they said, rests with the full Legislature.

Clay Britton, the governor’s chief counsel, said state gives the LCC some authority to “represent” the Legislature when it’s not in session, “but that no more gives the LCC the ability to represent the full policy-making authority of the legislature than I – as a representative of the governor here today – can exercise her full lawmaking or executive authority.”

That wasn’t the governor’s position when the resolution was being negotiated, said the Legislature’s attorneys. She not only participated in those talks, they said, she agreed to allow the LCC to review her executive orders until it was safe for lawmakers to resume their 2020 session.

“Having agreed to a compromise that her own staff helped broker and that passed the legislature with virtual unanimity, the governor seeks to jettison all of the conditional requirements,” the LCC’s attorneys said in the response they filed with the court.

When it passed on March 19, the resolution was seen as a compromise between Republican lawmakers upset by Kelly’s order closing schools and Democrats determined to give her the clout to protect public health.

Kansas was the first state to close K-12 school buildings for the rest of the academic year. And Kelly was among the earliest governors in the country to issue a broad stay-at-home order in a state where the virus had yet to spread widely.

Attorney General Derek Schmidt, a Republican seen as a potential challenger to Kelly in 2022, is a key player in the debate. He issued a memo to Kansas law enforcement agencies that urged them to avoid “criminal enforcement” of Kelly’s orders.

In the brief he filed with the Supreme Court, Schmidt said Kelly’s use of the authority granted her by the state of emergency was “unprecedented” in its “geographic scope” and its “intrusiveness upon citizens.”

“In short,” Schmidt said, “we all are in uncharted waters that may test the limits of emergency powers.”

The political flap between the governor and lawmakers has caused some confusion about the status of Kelly’s order.

Gregory Riggen, pastor of The Truth Church in Olathe, said on his Friday podcast it was unclear whether public health orders issued by Johnson County applied to in-person worship services.

“We don’t know for sure exactly where we stand,” Riggen said.

Still, he said, “after counsel and prayer” church leaders had decided to refrain from normal services to protect “the health and safety of our congregation.”

However, if the weather allows, the church is planning to hold a “special resurrection service” in its parking on Easter Sunday. It urged members of the congregation to worship from inside their vehicles.