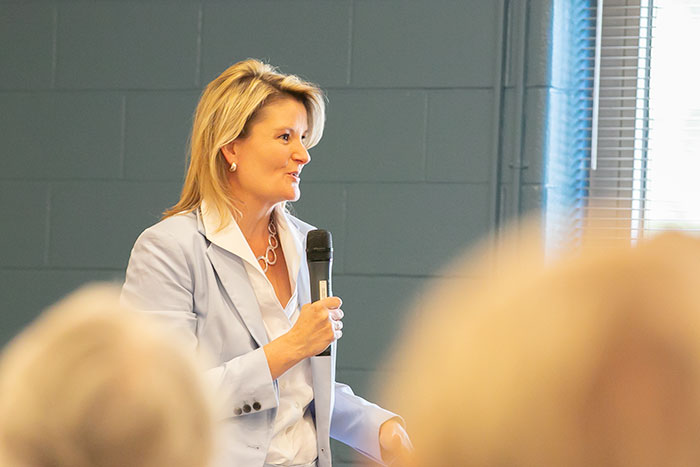 Holscher announced her plans to run for the seat a year ago, and has been actively raising money for a campaign ever since. She led all Johnson County candidates in fundraising efforts for the 2019 reporting periods with $79,000.

Denning started his legislative career as a member of the Kansas House representing District 19 from 2011 to 2013, when he moved to the upper chamber. In 2016, he defeated Democrat Don McGuire 53-47 to win a second term in the Senate.

When she announced her intent to run for the seat last April, Holscher cited Denning’s refusal to bring a Medicaid expansion bill to the floor for debate as among her primary motivations. Ahead of this session, Denning and Gov. Laura Kelly announced they had reached a tentative deal on a Medicaid expansion bill, but the effort was derailed after Republican legislative leaders tied the expansion bill’s fortunes to a proposed constitutional amendment on abortion access.

Holscher said Medicaid expansion remained one of her top priorities.

“Our community has demanded Medicaid expansion for nearly a decade and has yet to see any results from their State Senator,” Holscher said in a release. “Despite his recent change of heart and promise that he would get it done, he has still never voted in favor of Medicaid expansion.”

Denning has not responded to an invitation to comment for this story, but following the Legislative Coordinating Council’s vote on Wednesday, he posted on Twitter that he was recommending against congregations meeting in person this week despite his vote:

It is important we abide by the Kansas Constitution and not criminalize religious gatherings, however, places of worship should take CDC recommendations and not meet this Sunday if the gathering will exceed 10. We need to stay safe and use precaution during these times. #ksleg