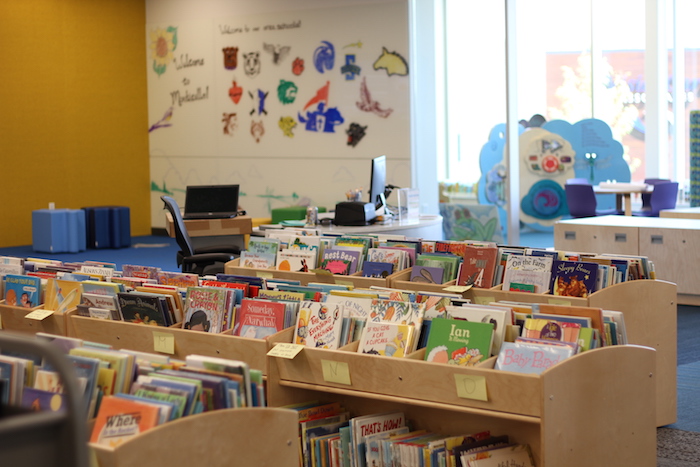 “Eighteen million dollars, it does hurt and it’s not easy," said Johnson County Manager Penny Postoak Ferguson while discussing budget cuts at Thursday evening's Board of County Commissioners meeting. Library employees make up a significant portion of the furloughs since their jobs can't be done when branches are closed. File photo.

The county has furloughed 246 of its employees and is in the process of cutting $18.8 million in the current budget of its various departments because of the coronavirus outbreak. Another $2.3 million of projects have been deferred, for a total of $21.1 million cut from this year alone.

The cuts are expected to be temporary, but might be only the first in efforts to cope with dwindling revenues brought about by the pause in businesses, said Johnson County Manager Penny Postoak Ferguson.

County commissioners questioned some of the budget cuts made to the sheriff, Med-Act and mental health departments, but were reassured that those department could still perform their essential services.

The sheriff’s department is in line for a $4 million cut, making it one of the largest. Other cuts of over a million dollars are planned including $3.4 million for facilities, $3.1 million for public works and $1.2 million for technology.

The cutbacks are being achieved through the furloughs, hiring freeze and reduction of overtime pay. The furloughs come primarily from the motor vehicle department, parks, and library system where buildings are closed.

But some commissioners were concerned about the cost paring that will happen to departments that deal more closely with health and safety during the pandemic.

“If we’re starting to yank money away from the sheriff I want to understand what we’re yanking away,” said Commissioner Steve Klika. He said the county needs to continue providing a strong safety net for its people.

Commissioner Mike Brown said that sheriff department budget will be able to get a lot of savings due to a decrease in the jail population. Since that census has dropped recently, the department will save in staffing and overtime, Brown said.

“I share the commissioners concerns with priority areas,” said Postoak Ferguson. “Eighteen million dollars, it does hurt and it’s not easy.”

Because no one knows how long the shutdowns will last, the county continues to work on cost cutting, she said. “For the most part we are able to achieve these temporary savings at this level without greatly impacting services beyond what they’re already impacted. When we start going to the next level it will hurt even more. It will be policy choice for the commissioners.”

Other commissioners warned that deeper cuts may be ahead. Brown noted that the cuts comprise about five percent of the county taxing district’s budget. “The economy has faltered much more than five percent. Continue to dig and continue to plan because the hole in front of us –we don’t know where the bottom is. But I will assure you it’s much deeper than five percent.”

Because of the upheaval over the pandemic, county officials have decided to extend the deadline for filing informal appeals of property valuations to 5 p.m. April 17.

Normally those appeals are due within 30 days of when valuations are sent out. This year they went out Feb. 24. But commissioners said they have been receiving requests from property owners for a little more time to make the appeal.

The appraiser’s office only recently got confirmation from the state that they have the authority to extend the deadline as long as the appeal hearings are done by May 15 and decisions made by May 20. That keeps the appeal process on track to be finished by the time the next property tax payments are due.

People who have requested the extension will be notified, but it will be open to everyone. For more information on filing an appeal, go to the appraiser website.

The extension doesn’t affect the spring deadline for paying property taxes, however. That remains May 11.

Bus and micro transit services also will be pared back in the near future. Since rules on social distancing have begun, ridership on Johnson County routes and on the micro transit van-hailing service have dropped sharply, said Jay Leipzig, the county planning director.

Ridership on fixed routes has fallen 75 percent since March 9, and micro transit is down 52 percent for the same period, he said.

Beginning April 12, all buses except the 401 and 475 will only run during peak commuting times, 6-9 a.m. and 3-6 p.m. on weekdays. The two excluded routes would continue to run all day, but would come only ever hour or 70 minutes, said Josh Powers, the county business liaison. Transit officials will try to use smaller buses as long as adequate distance between passengers can be maintained, he said.

Micro transit will be for single riders only and the fleet in service will drop from five to three vehicles.

Transit authorities had been in the process of eliminating the low-ridership 402 route from Johnson Drive to Quivira Road and the 495 running east-west through Lenexa and Overland Park. That cutback has been put on hold, however, and the routes will remain in service for the time being.

County Public Health Director Dr. Sanmi Areola made a public plea on Thursday for residents to stay away from large gatherings Easter weekend.

The social distancing and business shutdowns have been working, he said. “We need to stay the course for a while. I think this weekend is an absolutely critical period,” he said. “If a large proportion of us were to ignore the social distancing that might stand a huge risk of erasing the position that we have the past two or three weeks.”

“This weekend if we lose control over our social distancing it will set us back way behind where we were three weeks ago,” he said.

State lawmakers recently reversed an order by Gov. Laura Kelly that limited attendance at worship services to 10 people or fewer.

A shipment of 500 swabs from a private lab, 200 from the state health department and 400 from Olathe Health Systems, plus more in the pipeline means the county can begin a random test of residents to get a better picture of where the virus is, Areola said.

The first tests were to begin this morning at the College Boulevard Activity Center in Olathe. But not just anyone can get tested. The county had a marketing firm that specializes in surveys come up with a cross section of residents who will be eligible for the test. They should have received an email invitation already, Areola said.

Health officials hope to do 500 tests and then repeat it three more times at two week intervals.