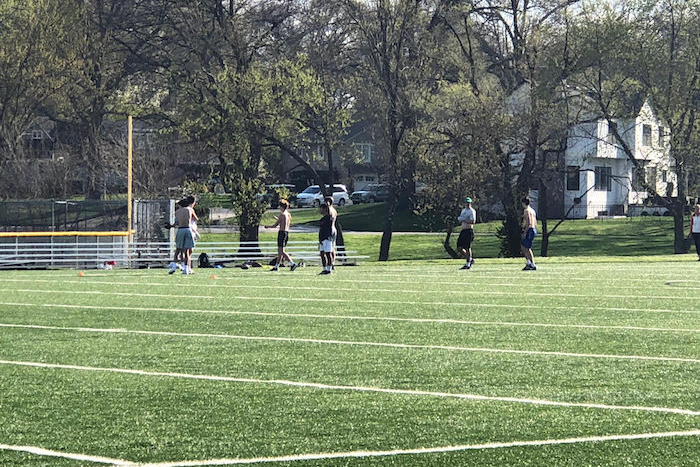 Although Gov. Laura Kelly issued a statewide stay-at-home order last month and the Shawnee Mission School District — as well as most area cities — closed off playgrounds, there has been reports of groups gathering to play sports at parks and school facilities. Submitted photo.

While the vast majority of Shawnee Mission residents have taken social distancing recommendations to heart, sporadic reports of people gathering for organized sports continue to frustrate some local officials.

And such gatherings have continued this week. On Thursday, a group of about a half dozen people gathered on the Indian Hills soccer field for an organized work out session.

“I think the general consensus among all enforcement in the county is we’re in an educational component, of course everything is a case-by-case basis so if we need to do something more, we’ll certainly do that,” Schwarztkopf said. “But right now I think we’re in a good spot with people complying just on their own, voluntarily, and when we do talk to them people are certainly understanding of the order and doing what we ask them to do.”

The school district’s police department said it will issue trespassing citations and the district released an announcement that school playgrounds would be physically closed and gates to school grounds would be closed in an effort to prevent public usage.

But these gate closures only applies only to elementary schools, not middle or high schools, according to the district’s Chief Communications Officer David Smith. Additionally, not every elementary school was designed in a way that allows for school grounds to be closed, he said.

“We’re all experiencing it, we’re all working from home, we get it — I’ve got children, you need to get out sometimes,” Smith said. “We want to support that, that’s a need. At the same time, we can’t support behaviors that increase exposure and threaten to sort of disrupt flattening the curve.”

In the same announcement, Shawnee Mission said team sports including football, basketball, soccer and baseball are prohibited on any school grounds.

“We just continue to work with folks [and] when we find out about things, we’ll address them,” Smith said.

The best way for the public to make the district aware of group gathering or social distancing violations on school property is to send an email to askthedistrict@smsd.org, Smith said.

Officials from Overland Park, Lenexa, Shawnee, Merriam and Roeland Park said residents are doing a pretty good job following physical distancing recommendations and that when group gathering is reported, police respond by educating those involved instead of issuing citations.

Roeland Park City Administrator Keith Moody said the city has received less than five complaints regarding social distancing adherence, and that tennis courts at the city’s R Park will remain open as long as the community is complying with social distancing and group gathering guidelines.

And when Roeland Park police officers respond to complaints, they rely mostly on educating those involved, Moody said.

Overland Park Public Information Officer John Lacy said the city has seen an issue with young adults wanting to hang out despite the stay at home order, but when officers make contact with those violating social distancing guidelines, most if not all cooperate, he said.

Lacy and Lenexa Director of Communications Denise Rendina both said it’s difficult to track the number of complaints related to social distancing, but Rendina said Lenexa complaints have been limited.

Mission has received only a few calls about groups playing in parks and the city has not seen many instances of people not adhering to social distancing guidelines, Assistant to the City Administrator Emily Randel said. When it comes to violations at parks, police officers stop by to educate groups about the proper safety measures, she said.