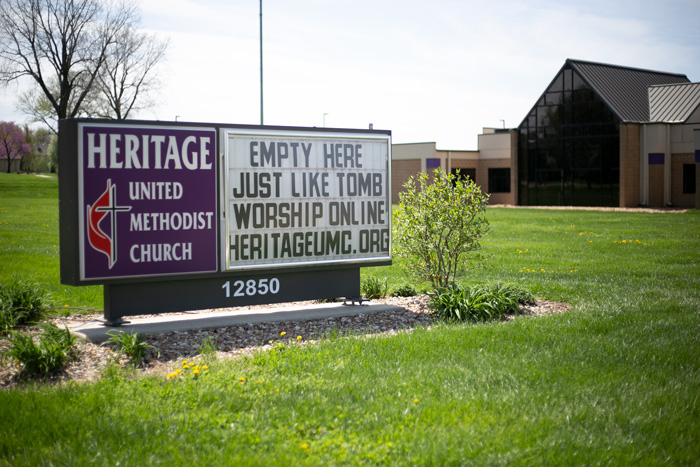 Regardless of whether a 10-person restriction is in effect or not, though, many churches in northern Johnson County said they weren’t planning to offer in-person Easter services this week, instead electing to temporarily offer services online only.

Johnson County government on March 19 ordered that churches were subject to a 10-person size limit on gathering size limit, but the order as it pertained to religious groups expired April 2. Gov. Kelly’s executive order would have subjected all churches in the state to the 10-person cap through Easter this coming Sunday and beyond.

Major local churches say had already moved away from in-person services weeks ago and are planning to keep that system in place for Easter. This includes United Methodist Church of the Resurrection in Leawood, Village Presbyterian Church in Prairie Village and Lenexa Baptist Church in Lenexa.

“These are strange times and they require wisdom and a willingness to take the long view,” said Rev. Tom Are at Village Presbyterian. “Village Church has a long history of seeking to practice our faith in a way that is good for the larger community. These days the best way to love our neighbors is to practice physical distancing. To do otherwise is inconsistent with the message of Easter: a celebration of God’s gift of life.”

Lenexa Baptist Church recently started offering online worship and Bible studies on a smaller scale without the usual choir and orchestra. Jim Fruth, executive pastor at Lenexa Baptist Church, echoed Are’s sentiments, noting that it’s important to “do the right thing and follow the request of our local and state leaders.”

“We want to be good neighbors and good citizens, and we want to respect those in authority over us as well,” Fruth said. “It’s a tough thing to do for Easter Sunday, but it’s the right thing to do.”

“Lord willing, though, we will see the largest Easter attendance that we have ever seen,” Fruth said. “It’ll just be hard to count them all because we can’t see them. But we know that our online connections have grown immensely, as much as five times the volume that we would normally see.”

United Methodist Church of the Resurrection has also been offering remote services for its 20,000-plus members for the past few weeks.

“You are dispensed of your Sunday obligation to attend Mass, but you are still to make the sabbath holy as best you can,” wrote Father Scott Wallisch in a message to members.

Bethany Lutheran Church has also switched to online worship services only, as well as internet-based Bible studies and other fellowship opportunities.

Whether it has much impact on how Sunday plays out in churches across Johnson County or not, the Legislative Coordinating Council’s move has elicited a range of political reactions.

Multiple church leaders in Johnson County said they agreed with Gov. Kelly’s order on a moral level, though some had concerns about any legal mandate that prohibits church gatherings. Pastor Kevin Wyssmann at Bethany Lutheran said he appreciated the legislative leaders’ move to overturn Gov. Kelly’s order, citing his concerns with the separation of church and state. Nonetheless, he believes that churches should refrain from gathering in person to stem the spread of COVID-19.

“I really believe that constitutionally, they made the right call; I think the governor overstepped her bounds,” Wyssmann said. “However, I do believe Christians are morally obligated to voluntarily comply with the intent of what she was doing, which is to protect our society…There’s still the need to cooperate in this environment and not to assert our freedoms or our rights at the expense of the health and safety of society. I think we’ve got to find that balance.”

“We’re a small church to begin with,” Smith said, noting the church size of a little less than 100 members. He estimates about 80% of members are staying home and participating online; remote worship is new for Church KC and other churches as well.

Smith added that he approved of the legislative leaders’ move to overturn Gov. Kelly’s order.

“As a citizen, I am happy that they overturned it…not because we’re going to take that right, but I think preserving the right of the church to meet is important and has been important in our country since its founding,” Smith said. “I still want the right to meet preserved because it gets very dangerous. There are other reasons later that we can’t even see, which our founders understood, when we start making it illegal to meet.”

Some state and federal officials, however, were clearly upset with the move.

“Rather than work to ensure the health and safety of Kansans, extremists in the state legislature have created chaos and confusion and endangered our public health,” Davids said. “To be clear: the governor’s executive order does not prohibit anyone from worshiping, only from gathering in large public groups. Thank you to the many responsible faith leaders in our community and across the state who have also urged their congregations to take preventative measures to slow the spread of this virus, including limiting mass gatherings. I join them in asking Kansans to please stay home if you can.”

Sec. Lee Norman, MD, of the Kansas Department of Health and Environment took to Twitter to express his frustration after the Legislative Coordinating Council’s vote.

Nothing fun, nothing fancy. Whatever Kansas legislators do doesn’t reverse what The Public needs to do. Stay home so we can beat this scourge. Despite what the “leaders” of the Legislature say. We are so close, and they are doing politics. Don’t fall for it! I am SO angry! Shame!