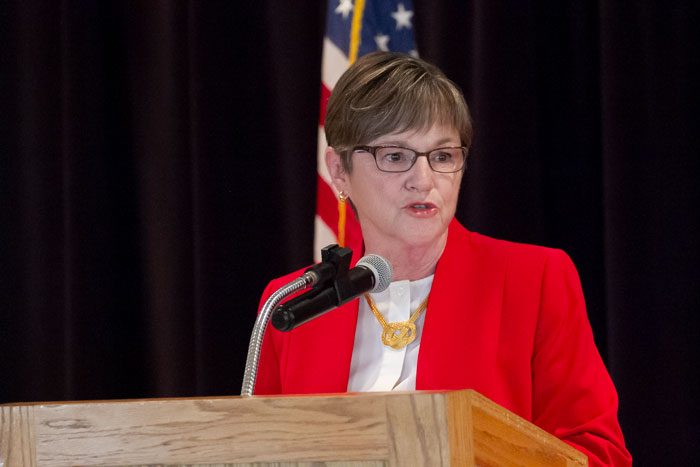 The battle in Kansas over religious freedom and pandemic control grew more fierce Thursday, clashing over an executive order limiting religious services and funerals to 10 or fewer people.

Gov. Laura Kelly said she is suing the GOP-led Legislative Coordinating Council that overturned her directive just days before Easter. She believes only the full Legislature can overrule her. She wants the state Supreme Court to take up the issue quickly.

At the same time, the Democrat said it isn’t clear whether her March 24 directive meant to slow the spread of COVID-19 is still in effect, though Attorney General Derek Schmidt has argued it is.

“The last thing I want right now is a legal battle,” Kelly said. “But … Kansas lives are on the line and I took an oath to uphold and defend the Constitution.”

State Senate President Susan Wagle, one of the five Republican leaders who voted to rescind Kelly’s order, did not immediately respond to requests for comment.

They said they’d been talking with the governor’s office and the attorney general to try to come to an agreement; Kelly said she offered a compromise that the GOP leaders rejected.

The three did encourage Kansas residents to stay home for Easter and Passover, and that faith leaders should “continue to offer alternative forms of worship and online services.

Kelly initially restricted gatherings to 10 or fewer in late March, and expanded it Tuesday to include church and funeral services. The newer executive order took effect Wednesday, and applied to churchgoers, but not choirs, ministers or others who were taking part in a ceremony.

The Republican legislative leaders on the LCC contended the move was an unconstitutional restriction on worship. Schmidt said his office suggested Kelly issued an “overreaching executive order.” But based on advice from her chief counsel, Kelly said she believed the expansion was legal.

Many churches already had canceled services or had moved them online. But by Wednesday afternoon, all of the Republicans on the seven-member panel voted to rescind Kelly’s executive order.

Not long after, Kelly held a news conference in which she called the decision “shockingly irresponsible” and said her legal team was looking into their options. Schmidt later issued a statement that argued the original executive order from March 24 was still in effect because the one that limited church gatherings and funerals hadn’t yet been published in the Kansas Register.

Kansas was the first state to close K-12 school buildings for the rest of the academic year. As of Friday afternoon, the state had more than 1,100 cases of COVID-19 and 42 deaths, and pointed to a dozen outbreaks that were tied to group settings, including three church events.

This is a breaking news story and will be updated.