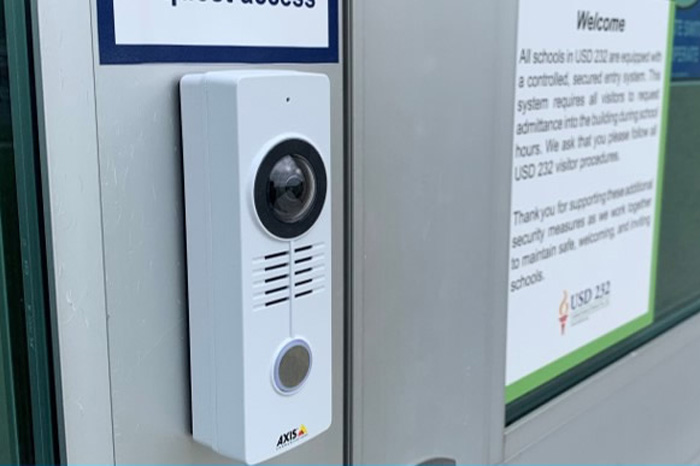 USD 232, which serves De Soto, Shawnee, Lenexa, and a portion of Olathe, is upgrading its safety/security systems this year. Pictured above is the security camera and doorbell at one of the district's facility entrances. Photo courtesy USD 232.

USD 232 is adding a duress/panic button that can be activated in case of intruder to key entrances at each of its school buildings this year.

The project will also install electronically controlled magnetic locks and/or controlled spike plates on doors inside main offices and other key areas at 16 facilities within the district.

Once installed the systems allow schools to activate emergency notifications and create additional barriers to help prevent or delay an intruder from entering the main area of each school.

According to Alvie Carter, district spokesperson, the improvements will connect multiple systems through programming and automation and includes:

“We hope we never have to use these items, but it would provide an additional layer of security to help keep students and staff safe,” Carter said.

The district will use a $60,000 security grant from the state of Kansas to pay for the $65,595 project, which will be completed by USD 232’s new security partner, Kenton Brothers Inc.

Remaining costs will be funded through a 2018 bond issue.

The new system will integrate with the district’s current security, which include visitor control and mass notification systems, according to a district staff memo.

“As we continue to move forward improving our security measures, we realized that we need a more holistic safety/security approach,” Cater said. “It’s critical that our various systems have the appropriate integration and interoperability. We have to make sure that these systems integrate.”

The USD 232 school board unanimously approved the security enhancements and hiring Kenton Brothers as a security/safety partner.