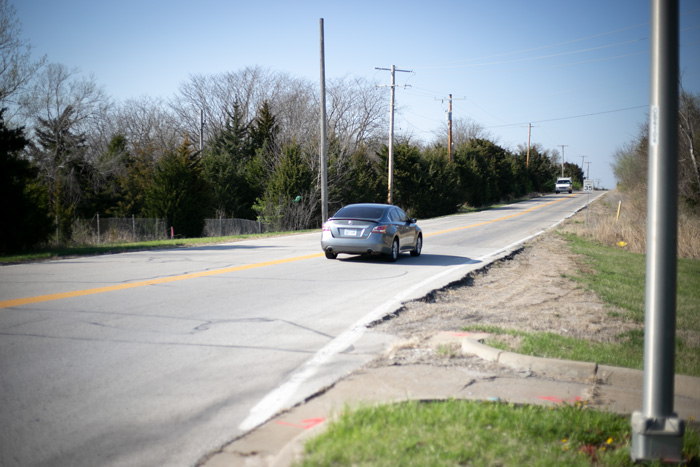 Renner Road between Johnson Drive and Shawnee Mission Parkway is among the first section of Shawnee's road system that would be redesigned as a green street, if and when future development occurs.

The city of Shawnee is planning to add a new classification of transportation infrastructure — called green streets.

Green streets will “provide the amenities of a trail system and streetlights our residents desire, yet won’t include the infrastructure a higher density and higher traffic volume street requires,” according to city documents.

This type of design would be utilized for unimproved streets where development is slated to occur and would allow future roads to be built to the level of current traffic volume.

“The goal of this concept is to promote development in our more rural areas but also provide a safe and sustainable street section for that development, and also the connectivity and the amenities that our residents want and need,” said Caitlin Gard, Shawnee assistant city manager.

Green street design would be considered for low-density residential and future development and may include:

“That’s what we’re trying to avoid, is putting in streets that meet the need that we have for traffic counts and not exceed our current needs,” said Raegan Long, senior development engineer. “Why are we building roads for high traffic counts when the traffic isn’t there yet?”

Currently, developers are required to provide full improvements to street infrastructure adjacent to their property. This includes improving half of the street that is directly adjacent to the development site, installing a curb and gutter and enclosed stormwater system, and adding sidewalks and streetlights.

Shawnee councilmembers unanimously agreed in their committee meeting to move forward the green street concept for consideration by the governing body.

Before voting, councilmembers shared their support for the new street classification, citing the benefits for sustainability and cost savings, especially in stormwater infrastructure.

“The savings there is absolutely incredible,” said Councilmember Matt Zimmerman, citing the added benefit of stormwater maintenance cost savings. “I think the concept is a perfect fit for our more rural parts of Shawnee out west.”

The following are the first streets in which the green street concept would be implemented when future development occurs: