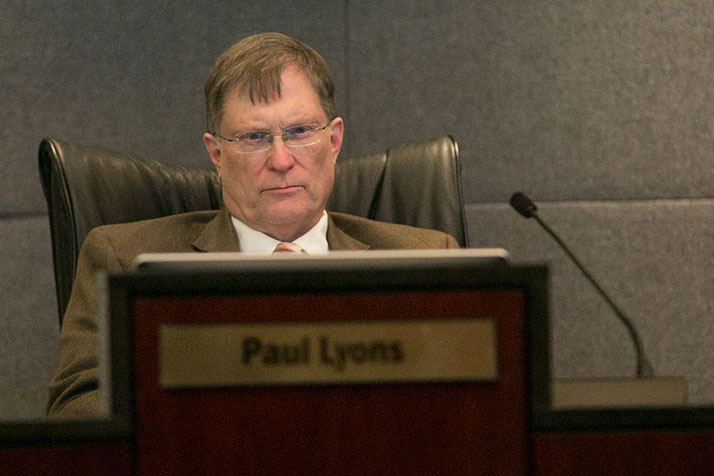 Public Safety Committee Chair Paul Lyons characterized the hazard pay request as a rehash of the request to implement the planned pay increases that the council rejected on a 9-3 vote Monday. File photo.

Following the governing body’s rejection of their motion to rescind the suspension of planned salary increases for police and fire personnel, three members of the Overland Park council have submitted a request that the city consider giving first responders $500 per month in hazard pay during the COVID-19 pandemic.

But the chair of the city’s public safety committee says the difficult budget considerations that prompted the city manager to halt pay raises in the first place make the hazard pay proposal untenable as well.

“All city employees understand the gravity of the economic situation and are willing to sacrifice a little now in order to insure the long term viability of Overland Park,” said Councilman Paul Lyons, the public safety committee chair, of the hazard pay proposal. “Now is not the time to entertain giving hazardous pay to some employees. The city manager’s sobering report [Monday] told us his first priority is to stabilize the city’s financial situation. That is prudent and necessary. Thousands of people in Overland Park are being furloughed or losing their jobs. Their families are facing tough decisions about cutting expenses, too. Asking city employees to temporarily maintain their current salary seems trivial in comparison.”

Councilmembers Faris Farassati, Gina Burke and Scott Hamblin on Monday asked their peers on the council to consider voting to reverse City Manager Bill Ebel’s decision to suspend previously approved raises for all city employees for 60 days so the administration could get a better sense of how the COVID-19 shutdowns are impacting sales tax revenues. Overland Park had already been keeping a close eye on sales tax revenues after proceeds came in well below projections for much of last year. With the closure of major retail centers like Oak Park Mall as a result of the pandemic, that already shaky revenue stream will likely plummet.

Still, the city had built up some $48 million in reserves, and the 2020 budget approved by the council last summer accounted for $1.8 million to be allocated to raises for city employees. Frontline police personnel accounted for about $595,000 of that figure.

Police and fire groups along with Farassati, Burke and Hamblin argued that, given the pressures first responders are facing during the pandemic, the city should move ahead with the raises as planned.

In a message to councilmembers lobbying for the reinstatement of planned raises ahead of Monday’s meeting, Overland Park fire and police leaders highlighted the enhanced risk police, fire and paramedic personnel face from the virus.

“Our members must go out into the public. We must break all social distancing rules. We must interact with those who are sick. We gladly do it because we all love this city and take our oaths to protect, serve and do no harm seriously,” wrote Mike Mosher, President of the local chapter of the Fraternal Order of Police. “However, we are scared. We are scared of an invisible enemy that we can’t fight. It infects us and then much later rears its ugly head and infects our families. Many of our family members are of high risk and it would be seriously detrimental to their health to contract this virus.”

But Farassati, Burke and Hamblin found no allies among their council peers for their request. The full council rejected their motion on a 9-3 vote.

On Tuesday, Farassati, Burke and Hamblin sent a message to Ebel, Mayor Carl Gerlach and the rest of the city council asking that the city consider enacting hazard pay of $500 per first responder backdated to March 15, the first pay period after Gov. Laura Kelly issued a statewide disaster declaration, and effective until that declaration expires.

“Other jurisdictions have accomplished similar actions. If this requires city council action we request its addition to the agenda as soon as possible,” Farassati wrote. “If the intention to support our first responders exists beyond words, then this is the perfect opportunity to prove such.”

Lyons characterized the hazard pay request as a rehash of the request to implement the planned pay increases.

“The request for consideration of hazard pay is nothing more than a variation of [Monday’s] proposed agenda item by council member Farassati to rescind the city manager’s temporary freeze of all city employees pay for the next 60 days,” Lyons said. “The majority of the council firmly rejected it. I can’t imagine why this would be treated differently.”

Farassati pushed back on that characterization, saying Lyons and others on the council weren’t acknowledging the risks first responders were facing.

“I agree with councilmember Lyons that Monday night’s meeting was sobering,” Farassati said. “It was sobering, however, from different perspectives. It was sobering how the chairman of our public safety committee, Paul Lyons, has difficulty understanding the immense task on the shoulders of our first responders in this viral pandemic and the meaning of ‘hazard pay’ in this context. It was sobering how this administration fails to acknowledge the minimal effect that hazard pay would have on city finances.”

Lyons also suggested that the three councilmembers were trying to subvert the established delineation of powers between the administration and governing body.

“These council members need to spend more time understanding how our city manager-mayor-city council form of government functions. Employee salary decisions fall exclusively within the city manager’s authority,” Lyons wrote. “I, along with the majority of the council, stand together with staff in one voice, common purpose, and unified action. I ask council members Farassati, Hamblin, and Burke to work with us.”