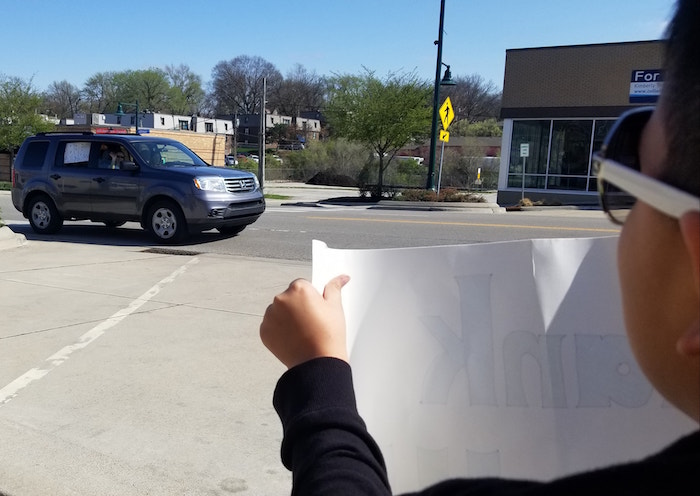 Bradley Rothrock's fourth grade classmates and their families put together a Brad Parade as a way to keep him connected to his community under the stay-at-home orders.

When the in-person schooling closure was announced, Bradley Rothrock, an autistic fourth grader at Tomahawk Elementary School, started receiving video messages from classmates in an effort to continue developing his social skills. Then, his peers and teachers took it one step further.

Rothrock’s classmates, their parents and his teacher on Sunday afternoon held a “Brad Parade”: They drove by in their cars, waving signs with empowering messages and honking while Rothrock sat with his family on Johnson Drive. Arcie Rothrock, Bradley’s mother and a Mission city councilmember, said the stay-at-home order has been taking a toll on her son, but the act of kindness made his day.

“You could just see on his face he realized these kids were here to see him, and then he was just super excited, it made his day,” Arcie said. “I couldn’t even tell you — these kids are so genuine and phenomenal, and this is one of the millions of things that they have done for Bradley.”

Travis Sumner, Bradley’s structure language classroom teacher at Tomahawk, said that since the beginning of the pandemic, he’s wanted to make sure his SLC students aren’t forgotten. He reached out to Bradley’s general classroom teacher, Kim Taylor, about having students send in videos as a way to meet Bradley’s needs.

In less than half an hour, Sumner said he started receiving videos for Bradley. The acts of kindness are commonplace at Tomahawk, he said: This specific group of fourth graders are something special, but the Brad Parade is really a testament to the school’s community, he said.

“Shawnee Mission schools like to say, ‘all means all,’” Sumner said. “At Tomahawk Elementary, you see this phrase lived out everyday. I think the Brad Parade was indicative of our school’s culture — from our principal, to the hardworking teachers and the families of our wonderful students, everyone at Tomahawk is a family.”

Sumner has been working with Bradley since he was 5-years-old, and said he’s watched Bradley grow into an independent almost-10-year-old who has “a sense of humor, the ability to advocate for himself, the confidence to be independent at school” and more. If it weren’t for the Tomahawk community, from Bradley’s teachers to his peers, Sumner said he’s not sure any of those things would be as developed as they are now.

Arcie shared similar sentiments: Bradley’s autism affects his social skills more than anything, and the culture and students at Tomahawk have allowed him to bloom, she said. Arcie said she and her family are used to explaining to other children that Bradley has autism, but the Tomahawk students have accepted Bradley and will hold an entire conversation with him even if he’s not responsive.

“It’s so much big love in these small hearts,” Arcie said. “[It’s] just amazing really, everybody looks out for Brad from the parents and teachers to the custodian, even his peers’ siblings… We have never had to apologize for anything with these kids, these kids are so good to him.”