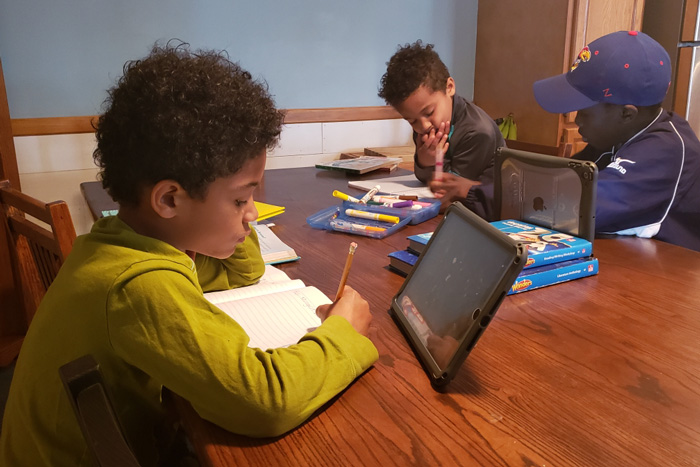 The Diémé boys spend time learning together at the kitchen table, then playing together after going through learning materials provided by the Shawnee Mission School District. Photo courtesy Megan Diémé.

The burden of student supervision has fallen largely to parents after schools closed for the remainder of the academic year, due to the coronavirus pandemic.

We heard from a few parents across the Shawnee Mission School District about their homeschooling strategies, which incorporate the continuous learning plan being implemented by SMSD teachers and staff.

One common theme: All parents we interviewed said they appreciate their childrens’ teachers, who have been responsive and helpful in the remote learning process.

Here are those stories:

Megan Diémé and her husband, Kalifa, have three boys: two at Ray Marsh Elementary, and the youngest in preschool. The sixth grader and second grader are learning from their home in Shawnee.

The Diémé boys are utilizing the district’s remote learning activities for their grade levels, and the second grader also has his district-issued iPad.

In the past few weeks, Diémé has been invited to multiple Facebook groups for homeschooling parents. At first though, she had to prioritize work obligations (she’s a therapist at a local mental health agency) while adjusting to this new way of life at home.

“The first week, I know that there were a lot of parents that were already doing crafts with their kids and doing all these wonderful things, whereas I think we were just trying to kind of survive and figure out the first week,” Diémé said.

The Diémés also pulled their preschooler from daycare so they could follow CDC guidelines — a trend that other preschool parents are also following across the state.

Their new routine starts with the kids sleeping in while the parents get some work done at home.

Remote learning begins in late morning, during which Diémé juggles work obligations and learning supervision. They read literature while the younger ones learn online with ABCMouse.

Once the boys wrap up education activities, they enjoy playing together, fishing and exploring at the family lake house at the Lake of the Ozarks.

“They made a tepee, they made a tomahawk on their own — that counts as social studies, and that probably counts as a Boy Scout merit badge,” Diémé said.

Diémé said she hopes her boys can maintain what they’ve learned so far this school year, especially the oldest, who is a non-native English speaker.

“And really, as a family, I kind of look forward to this time that we just have with each other and we don’t have all these distractions,” Diémé said. “We’re taking out all the white noise and really trying to figure out who we are. It really is bringing us closer together.”

Megan Bannen and her husband, Mike, have two sons: A fifth grader at Santa Fe Trail Elementary and a seventh grader at Hocker Grove Middle.

Bannen said continuous learning at their Overland Park home is done during the time blocks of 10 a.m. to noon and 1-3 p.m. But overall, the Bannen family’s focus on learning has centered around life skills and hands-on learning. Bannen said she and her husband, a middle school teacher at Hyman Brand Hebrew Academy, are sharing homeschooling duties, although Mike Bannen has his own students to focus on.

The Bannens want their sons to drive learning based on their own interests.

The older son spends time writing and dabbling in digital art on his artpad. He also leads a Dungeons and Dragons campaign with his school friends online, and enjoys touring virtual art galleries.

“I think he’s enjoyed the whole ‘I get to decide what I’m learning thing,’” Bannen said. “It’s been fun to explore learning with them. There’s been a certain reconnection of family going on, that you don’t always get in the hustle and bustle of everyday life. We’re just doing our best and making the most of a really terrible situation.”

As a tactile learning, the fifth grader is doing quite a bit of cooking and baking, which allows him to exercise his mathematics skills in things like fractions.

“So if I say something like let’s double this recipe, he’s been using his math skills in real life,” Bannen said.

The fifth grader has also enjoyed watching Nova documentaries and has also taken the lead on his family’s vegetable garden (lettuce, parsley and peas). This is his first season in charge of the garden.

“He’s having to read the instructions and actually do measurements to see how close things should be, how deep you plant them,” Bannen said. “I let him do it, which was really hard for me.”

Bannen said their continued learning plan and social activities depend on regular internet access, for which they’re grateful. And following those loose guidelines has allowed the boys to explore their interests on their own.

“Right now, I think we’re all working through the kinks of figuring it out,” Bannen said. “I think we’ve made the decision to just not freak out about it. It’s already a stressful situation, and I don’t know that us trying to be formal with education at home, if that would really help the situation very much.”

Heather Rubesch and her husband, Jeff, have two students at SM East: Krissy, a sophomore, and Jacob, a junior. At first, both kept up their learning by watching documentaries together as a family and discussing them at their Prairie Village home. They also read books for their literature classes.

“I was trying to keep them from falling totally into their summer routine,” Rubesch said. “In some ways, it’s been hard to keep the kids motivated.”

Learning at their home begins at 9 a.m. and wrap up by about 1 p.m. In addition to activities provided by their SM East teachers, they also use learning tools from Khan Academy, an online resource.

Rubesch said she helps her students with some of their learning activities, although things like math are being taught differently than the way she learned when she was in school. Rubesch checks in with their teachers every once in a while (her usual routine) and checks her children’s progress on Skyward, the district’s online gradebook.

Rubesch is hoping her high schoolers can try to raise the grades in any classes that aren’t As, especially in math courses which they’ll build on in the fall. But more than anything, she wants her children to learn self-direction.

“I said this is the most like college that any of your high school experiences are going to be,” Rubesch said she told her students. “I said take this as an opportunity to have a microcosm of experience of what college is. It’s about being organized for yourself and taking initiative. Get out of it what you put into it.”