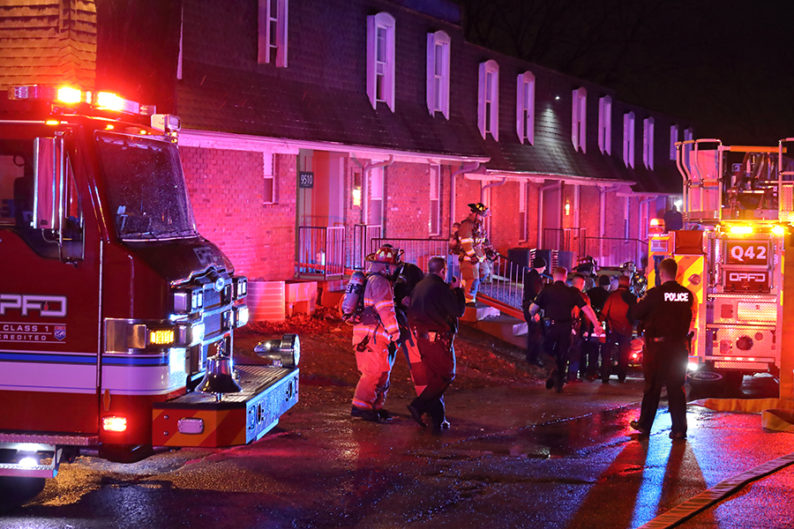 First reponders on the scene of an Overland Park apartment fire in February. Police and fire leaders in the city argued in a letter to elected officials that the coronavirus pandemic has placed first responders and their families for greater risk of infection, and that they should therefore get the raises the city had approved for them last year. File photo credit Mike Frizzell.

Overland Park first responders will have to wait at least two more months before getting a scheduled pay increase, now that the city council has decided not to overrule the city manager’s decision to delay the raises.

Council members voted 9-3 against putting a possible reversal of the pay freeze up for discussion at their meeting Monday night. That means City Manager Bill Ebel’s decision to hold off on the raise as an emergency cost-cutting measure in this year’s budget will stand.

“I think we at least owe it to our first responders to engage in this discussion,” said Councilmember Scott Hamblin, one of three council members who asked for the reversal. “I think a vote against even discussing this is a vote against the men and women who are out there right now protecting us and our city while we’re sitting here safely in our homes.”

But the majority disagreed, some of them saying the city manager has the power to make budget adjustments in an emergency and that the council doesn’t have the authority to overrule.

“I think (saying) that making a smart financial decision to delay for sixty days is disrespecting our employees is just darn wrong,” said Councilmember Curt Skoog. The council showed its support of first responders and all employees when it voted in the raise for the 2020 budget, he said, and will get another chance to revisit it when the city has a better idea of how the coronavirus pandemic has affected city finances, he said.

The raise delay applied to other city employees as well as first responders. The raise would have cost the city $1.8 million for 2020 for all employees, but $595,000 for public safety employees. Hamblin said the cost of adding the two months back in for public safety personnel would be around $100,000.

Hamblin and council members Faris Farassati and Gina Burke criticized the pay freeze last week with an emphasis on how police, fire and emergency medics would be affected. Then the Overland Park Fraternal Order of Police and Professional Firefighters of Overland Park Local 4818 wrote a letter, signed by FOP president Mike Mosher, calling for the raises to be reinstated.

The letter called the move a “chainsaw” approach to cutting the budget. Public safety employees face higher risk and that should be a consideration on whether they have to wait for the raise, the letter said.

“We are scared of an invisible enemy that we can’t fight. It infects us and then much later rears its ugly head and infects our families. Many of our family members are of high risk and it would be seriously detrimental to their health to contract this virus,” the letter said.

The police and fire associations also took issue, indirectly, with Mayor Carl Gerlach, who called the effort by the three council members to reinstate the raises political campaign rhetoric.

“Nothing could be further from the truth or more offensive to our members. We take our safety and the safety of our citizens very seriously and we don’t play politics,” Mosher wrote. “To prematurely, out of fear, withhold pay from front line essential employees in the middle of a crisis that could possibly kill them or their families is simply unacceptable.”

Before the vote, Ebel presented a bleak picture of the budget problems now facing the city.

Overland Park has a large retail base and is more dependent on sales tax than its neighbors, Ebel said. It also is vulnerable to dips in collection of the transient guest tax on hotel visits. With Oak Park Mall and the convention center and adjacent Sheraton Hotel closed because of the pandemic, the city’s revenues are dropping precipitously, he said.

Ebel projected losses of $11.5 million in sales tax this year, $5-$6 million in hotel guest tax and $8 million in property tax, fees, investment income and other taxes.

“I have to close a $25 million gap just this year,” Ebel said. Moreover the city’s contribution to police and fire pension plans will need to increase from about $1 million to $3-$3.5 million next year because of the reduced returns on those plans, he said.

He and Deputy City Manager Kristy Stallings presented projections that revenue would be less than expenditures through 2025, and that without more cost cutting the city would have to spend down its reserve fund well below the amount needed to maintain a Triple A bond rating.

The bond rating determines the cost of borrowing money for capital improvements. Since there is a state-imposed lid on raising the taxing rates to boost revenue, spending reserves would be one solution to the city’s money problem.

Ebel said, in answer to a question from Farassati, that the taxes the city foregoes for development, like tax increment financing, would not have been enough to put the city in a better position for this emergency.

The city council may have to eventually discuss policy issues on whether services should be cut, Ebel said.