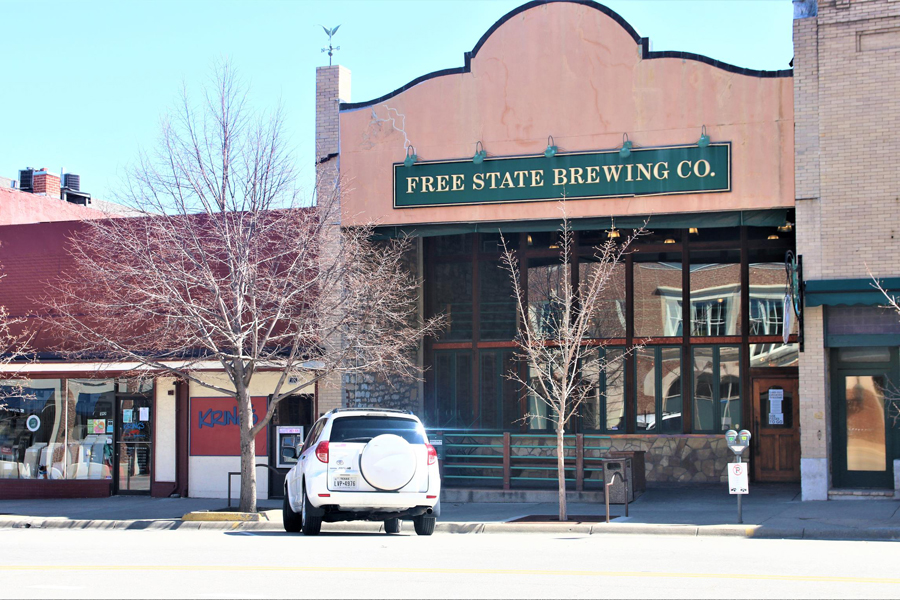 Empty parking places in front of the Free State Brewing Co. in Lawrence that would normally be full. The restaurant continues to serve take-out customers, but its dining rooms are closed. Photo credit Jim McLean/Kansas News Service.

TOPEKA, Kansas — Suddenly tossed from their jobs by the coronavirus shutdown, people from across the state continue to deluge the Kansas Department of Labor with a record flood of unemployment claims.

All that instant joblessness is greeted by one small bit of good news: Kansas appears to have squirreled enough money away to cover the surge in unemployment claims for nearly a year.

At the height of the 2008 recession, benefits peaked at $83 million a month, said Labor Secretary Delia Garcia.

With $985 million in its Unemployment Insurance Trust Fund, Garcia said, the agency could sustain payouts at that level for several months.

“That would get us through to about February 2021,” Garcia said.

The state might end up needing every bit of that to handle an unprecedented spike in claims.

After years of dealing with a worker shortage — a byproduct of an unemployment rate that had hovered for years just above 3 percent — the labor department wasn’t prepared to handle such a massive increase.

“We are in uncharted waters,” Garcia said.

The department got 211,520 calls on a single day last week. Most of them were from people who hung up and called back repeatedly rather than wait for hours on hold.

In a matter of days, Garcia doubled the number of workers fielding calls. But she’s urging people to file online.

Once a claim is in the system it typically takes a week to 10 days to process and pay, said Brett Flachsbarth, the labor department’s deputy secretary.

The process of verifying eligibility is simpler for most of those now filing claims, he said, “because we aren’t having to do a lot of fact finding to determine why they lost their jobs.”

Under an executive order issued by Gov. Laura Kelly, Kansans who lost jobs or are working reduced hours because of the coronavirus can receive benefits for 26 weeks. Under normal circumstances, the limit is 16 weeks.

Many of those filing claims worked in restaurants and bars now closed to keep people from congregating in large groups and spreading the virus.

The Free State Brewing Co., a popular eatery on Lawrence’s usually bustling Massachusetts Street, continues to serve take-out customers. But its dining rooms are closed. That has forced owner Chuck Magrel to lay off many of his employees.

“We have no idea what the duration of this is going to be,” Magerl said. He filed unemployment claims for his workers.

“Unemployment insurance is a safety net,” he said, “but it doesn’t come close to what their wages were just a week ago.”

Weekly unemployment benefits in Kansas range from a minimum of $122 to a maximum of $488. The average benefit is $330 a week.

The federal relief bill that Congress passed last week could add another $600 to whatever Kansans are receiving.

“We’re still reviewing the bill and the guidance, but it appears that is the intent,” Flachsbarth said.

“This seems to be that but on steroids,” he said.

In addition, he said, the federal legislation expands eligibility to people who normally can’t qualify for benefits, including independent contractors and those “working in the gig economy.”

Tish Cobb hopes that means she is eligible. She is the sole proprietor of hair salon in Lawrence that was recently closed for at least 30 days by the Lawrence Douglas County Health Department.

Cobb can afford to keep her shop closed for a month, but said “if it goes longer than that it’s going to be really, really difficult.”

Cobb filed for unemployment benefits using a special portal created for people out of work because of the coronavirus. She said the money won’t be enough to cover her loses but it will help.

Cobb’s husband is another example of the seismic waves that the COVID-19 outbreak is sending through the Kansas economy. He sells sports equipment to high schools and colleges, most of which have either closed or canceled their spring athletics. That drop in business has forced him to take a 20% pay cut.

The situation could be worse, Tish Cobb said, “but we’re definitely going to have to watch our pennies.”