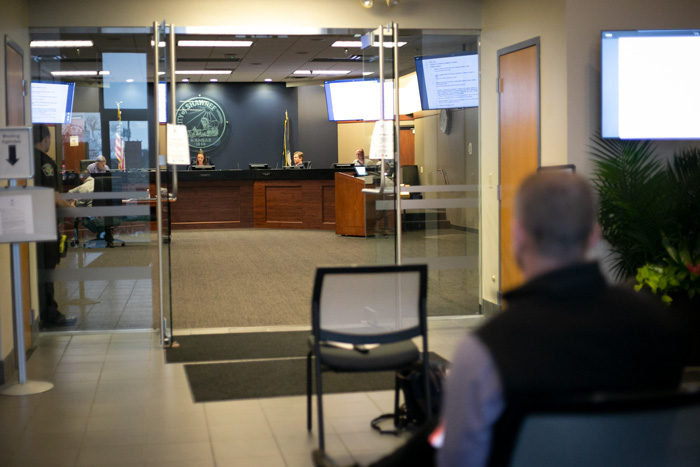 The circumstances of Monday's Shawnee city council meeting were unusual, with city staff and leaders working to conduct business while practicing social distancing and limiting the number of people in the council chambers to fewer than 10.

An air of uncertainty hung about the Shawnee council chambers last night, while city leaders and staff conducted a council meeting in line with social distancing guidelines and a 10-person limit.

Some cities in the Shawnee Mission area canceled their meetings or agreed to conduct their meetings remotely, while other cities’ council meetings took place last week. Shawnee’s meetings fall on the second and fourth Monday each month, and last night’s meeting happened to occur the day before a metro-wide stay at home order for 30 days was to begin.

The Shawnee council chambers were empty of chairs, save for a few seats up on the dais and two seats for staff. Mayor Michelle Distler and city councilmembers Tammy Thomas, Eric Jenkins, Mike Kemmling and Kurt Knappen were spaced equally apart across the dais, while the remaining four councilmembers — Matt Zimmerman, Lisa Larson-Bunnell, Lindsey Constance and Jill Chalfie — telephoned in.

The circumstances in the chambers were unusual for Shawnee city council meetings, which are typically half filled unless there is something on the agenda that would draw a crowd. But the crowds were gone and, in the interests of social distancing and transparency, much of the city council’s business was either approved without discussion or deferred to a later meeting.

The city council deferred to the next meeting a public hearing for an amendment to the community improvement district for Bellmont Promenade, a mixed-use project in the works at Shawnee Mission Parkway and Maurer Road.

Only eight people remained in the chambers during the meeting: The mayor, four councilmembers, two staff and one police officer for security.

A total of 10 seats for the public were spaced 6 feet apart from each other in the lobby just outside the chambers. Only three seats were taken, including one for an applicant on a rezoning item for a new residential subdivision.

The glass doors were propped open so the public could hear what was going on in the public meeting. Two “no touch” hand sanitizing machines were stationed at the entrance to the council chambers.

The next city council meeting is scheduled for April 13. Julie Breithaupt, communications manager for Shawnee, said city leaders and staff are still working out details on the logistics of the meeting, such as whether to cancel it or conduct it remotely.

The council unanimously agreed to suspend its policy on conduct of public meetings in response to the COVID-19 emergency. Suspending the policy allows the council to conduct meetings remotely. Public comments were not accepted in person, although residents were encouraged to submit comments electronically to the city.

The council is in the middle of developing a process for a new council president. However, because of the COVID-19 emergency, Mayor Distler recommended appointing a council president right away.

“This will allow for a line of succession for the mayor’s office should anything happen to me,” Distler said. 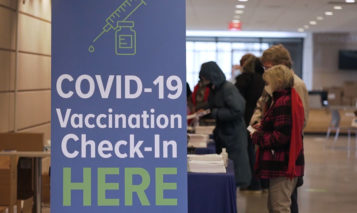