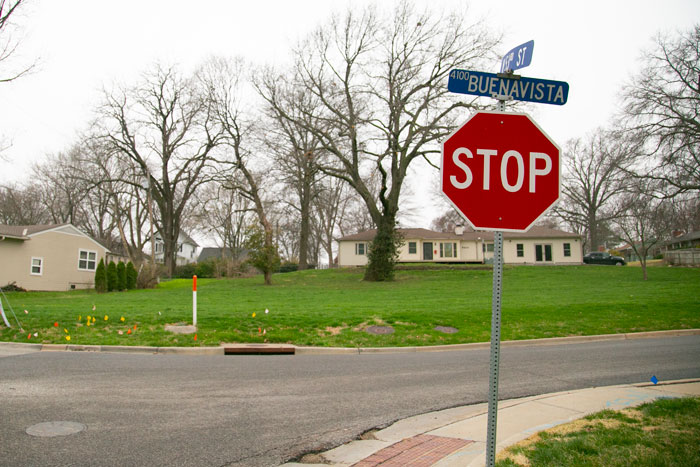 The potential all-way stop would be at the intersection of Buena Vista Street and 53rd Street (pictured).

Currently, the safety of the intersection and portion of Buena Vista Street in question is the main concern for the city. There are often pedestrians and bicyclists that must navigate behind or in front of parked cars. Prior to installation of either a sidewalk or three stop signs, the city must first proceed with a traffic and sidewalk study — which amounts to just under $15,000 — to see if either are warranted.

The city council heard from three residents who were in favor of an all-way stop, sidewalk or both, including from Fairway resident Mindi McDermott, who owns the property at the corner of 53rd Street and Buena Vista Street. McDermott and the two Roeland Park residents expressed concerns for the safety of themselves and their neighbors. Additionally, McDermott said she would support the city in any way she could to help the traffic study and ultimately the installations to proceed.

City Engineer Dan Miller said the study could be completed in a month or five weeks weather permitting. The traffic study would entail different methods such as the city placing tube counters on the road to capture volume and speed data, and people walking the area to evaluate site distance issues.

Councilmember Jan Faidley said she thinks the traffic study needs to be done in order to determine the city’s best options, but that the city should wait to proceed until it’s discussed what the city of Fairway — where much of the sidewalk would be — is willing to put toward the cost. Councilmember Jim Kelly said a stop sign is warranted for the area, and it would be wise to move quickly since Buena Vista Street is likely to see more traffic once Roe 2020 construction begins.

The mayor agreed with Kelly, in that the traffic study, all-way stop and sidewalk is an issue the city must address quickly. In addition, the mayor said the price tag for the study is not insignificant, and agreed with Faidley that it should be discussed with Fairway first.