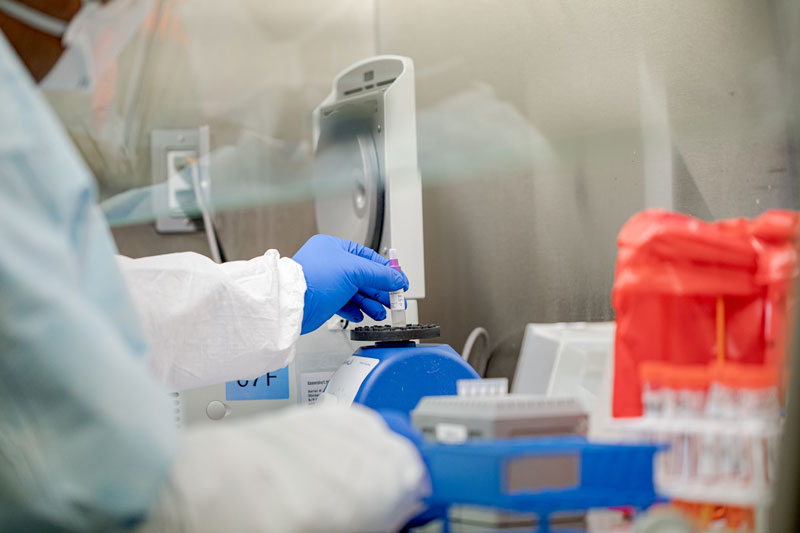 A lab worker in Pennsylvania running a batch of samples through testing for COVID-19. Kansas secured access to more kits over the weekend, but still has a limited supply. Photo used under a Creative Commons license.

Kansas Department of Health and Environment Secretary Lee Norman said Monday that the state received a shipment of 500 coronavirus testing kits over the weekend. Additionally, the state has secured access to about 200 kits from research facilities at colleges and universities across the state.

The lack of widespread testing in the U.S. has been a point of concern in the pandemic response, including among Johnson County residents and physicians in recent weeks. State officials last week suggested testing expansion would come soon, followed by the decision to prioritize test kits outside of Johnson County due to the fact that community transmission had already been established here.

Norman said commercial testing is taking a weight off of the KDHE lab’s shoulders: Of the 82 positive cases across the state, private labs accounted for 47 and KDHE’s lab accounted for 35, he said. Norman said the state will see a sharp uptick in the number of cases over the next couple of weeks as testing increases. The state health department now predicts Kansas will reach 300 to 900 cases by the end of the month. Testing criteria for KDHE will also be tweaked, and will prioritize the following groups, Norman said:

“It’s not like the people can’t get tested in the communities… with four testing options (private labs),” Norman said. “Hopefully, very soon some even more advanced testing [will be] coming on board with what we call kind of a bedside test if you will. We hope to increase that throughput, but for now that’s the reality that we’re living.”

There have been 405 coronavirus tests administered in Johnson County as March 23, according to the county’s COVID-19 update website. Of those 405 tests, 31 came back positive — including the Lenexa resident who died over the weekend. Johnson County Department of Health and Environment Public Information Officer Barbara Mitchell said the tests have been a mixture of KDHE and private lab testing, but she did not know the specific number for each nor the number of tests designated for Johnson County.

People who are experiencing mild COVID-19 symptoms don’t qualify for a test under KDHE’s criteria. Shawnee resident Janette Reinke began feeling sick on March 15, with a cough and on and off headache that lasted for a couple of days. Her symptoms increased recently, and now “the dry cough, chest tightness and lethargy have been pretty constant,” she said.

“For me, knowing if this is COVID-19 or not would give me some peace of mind, even as I get better,” Reinke said. “The not knowing is hard. I know it is minimal compared to people in the hospital fighting for their life, [but] knowing if I might have immunity once recovered will be a great thing to know.”

Reinke said she’s been frustrated with both the reporting of numbers as well as the decision to prioritize testing in other places. She said she’s unsure how coronavirus will be stopped “if one of the most dangerous parts of spreading this is that so many people can be asymptomatic.”

Additionally, she said it’s upsetting to see asymptomatic celebrities tested — not because they shouldn’t be, but because it shows how important it is for every person to be tested.

U.S. Rep. Sharice Davids in a statement last week said the science shows testing can help stem the spread of the virus, as those who have it can be made aware and take proper precautions. Johnson County has the highest number of positive cases at 32 as of March 23, and Wyandotte County is following right behind at 16 cases. Both counties are in Davids’ district.

“With the greatest number of coronavirus cases in Kansas being in Johnson and Wyandotte Counties, our community needs more tests, not less, and we need them now,” Davids said. “I’ll keep pushing for this Administration and the governor’s office to prioritize the health and safety of the Third District.”