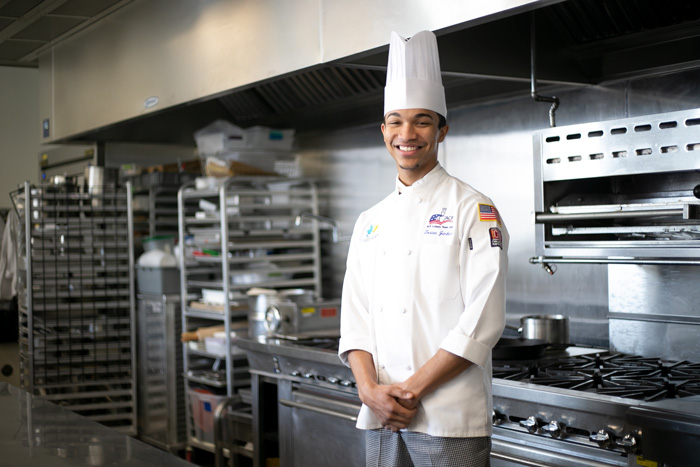 His love for cooking started off simple: Who doesn’t love eating in class? But after Torian Jenkins took home economics at Wichita Heights High School and his teacher pushed him to pursue a career as a chef, Jenkins has nearly completed his Certified Sous Chef degree at Johnson County Community College, is working his apprenticeship at Lake Quivira Country Club, and has recently returned from competing in the 2020 IKA/Culinary Olympics in Stuttgart, Germany. He plans to get into more culinary competitions after graduating. When he’s not in the kitchen, Jenkins finds himself outdoors, working out and hanging out with his girlfriend. He lives in Overland Park with some culinary classmates.

We got chosen to be the culinary team about two years out from the trip, after we did a regional competition here at Johnson County.

We were supposed to go to nationals. My coach — man, he is so terrible at delivering information sometimes — he was like, we aren’t going to nationals anymore…but you got chosen to be the Olympic team. We were just like what? Minds blown that we don’t even have to go to nationals to compete in tryouts.

This is the highest of the highs. We’re working on trying to make the best food in the world, so they wanted us to start working earlier. Two years passed. Blood, sweat and tears, like legitimately (points at his scars) as you can see, I’ve gotten burned at practice, in the kitchen, it’s constant critiques, judges coming in here, looking at our food and telling us what we need to fix, what needs to be better.

It’s always that constant refinement and searching for that perfection in the kitchen, when you’re making the food. You want to go there and be flawless. They care about hygiene, how you look, what your food tastes like.

February comes around and it’s finally time to go, we get on a plane and head to Germany. I used to live in Germany when I was real small, my dad was stationed there on a military base. So I was able to go back there as a grownup and be able to experience it on a completely different scale. Not even with the family, I’m going there to be a team and compete and represent the United States. It was ridiculous.

We don’t compete against anyone; we compete against a standard in the competition world. It’s one of those things where everyone can get a gold medal, but not everyone gets first place. So we go in there with a perfect score, and any mess up deteriorates our score — something like a dirty station, the misuse of products, cross-contamination, real big hygiene stuff, not washing your hands. That’s stuff they can take points away for.

There’s work to be done in the kitchen before you walk into the competition kitchen. So I have to set up, make sure I have all my equipment, because once I’m in that kitchen, I can’t come out of it. We’re prepping food, printing labels off that go right onto containers that say what it is, how much of it it is, and what recipe it’s for, and everything is super refined, super organized.

Literally, this level of cooking, it doesn’t get any more advanced than this. These are the best chefs from the countries all around the world coming in to display their skills. And just like track and field, somebody’s doing all this training before they go in there just to run around the track and that’s all it was for us, is to train, go in there, and do the same thing we’ve been doing for the past two years.

We cooked two programs: A three-course hot food program for 60 people, and a buffet platter cold food program for 12. There’s like three proteins on the platter, three garnishes, four finger foods, an entree and a dessert, that’s the whole cold program.

Our hot program started at, I want to say 6:30 in the morning, so we got up at 2 a.m. that day. We were expected to be up, cognitive and ready to function at 2 a.m., so we had to make sure we’re sleeping well while we’re there, eating the right foods, doing everything under the sun to make sure that our bodies are capable of being up for the next X amount of hours.

So we all pile into this truck with our equipment and our food packed up, shoving everybody in a huge van and we go there, we roll in as a team, and we get outside the kitchen and it’s 4 a.m. at this point. Everybody’s eating granola bars, drinking water, trying to get juices in our system and make sure we have calories to burn when we’re in there. Because it’s intense, you’re moving nonstop.

So five hours to cook, and an hour and a half to serve, and then we have another hour to clean the kitchen and get out. So set up one day, compete, run our hot food program, go home, sleep, set up the next day, run our cold program. That’s four days back to back.

We got 10th in the world, 10 out of 24 countries. We got a silver medal in our hot food program, a bronze medal in our cold food program. It’s crazy. It upsets me a little bit, because I knew we were capable of way more, but there’s always a challenge you face. It’s about how you overcome those things.

I learned that it takes teamwork to accomplish anything that big. You can’t do anything by yourself; believe it or not, you need people there to support you.

One hundred percent, I would go back and compete. I won’t be a youth team member; I’ll be a professional at that point. Maybe not the 2024 Olympics, maybe the 2028. But as long as I stay on the path I am, I could be in the position that the national team guys are in, the guys who are professionals in their industry and in their craft who are doing this. My goal is to be there competing on that level again because it’s exciting, it’s addicting. It sounds bad getting up at 2 in the morning, but I wouldn’t do it for anything else.