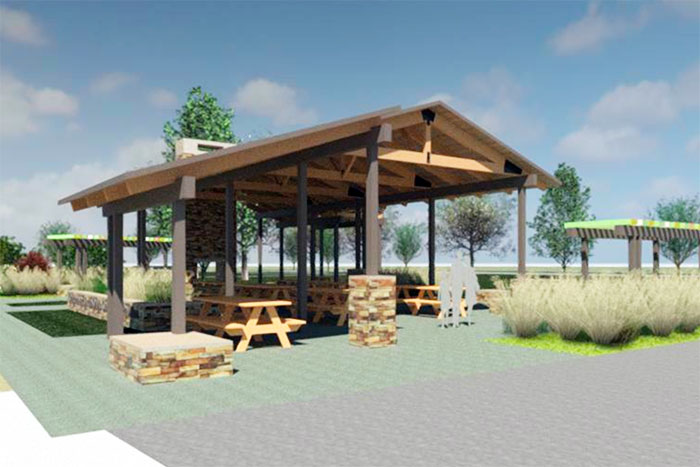 A rendering of one of the design options for the pavilion planned to be built at R Park.

The Roeland Park city council on Monday evening approved a bid for two phases of improvements at R Park — including a shelter, restroom and hammerhead installation near 55th Terrace.

Councilmember Tom Madigan said that while he is in support of R Park improvements, he had some concerns considering the situation with COVID-19.

“As the mayor so aptly stated earlier, we’ve had a lot of changes within the last seven days,” Madigan said. “I think we might want to step back and look at this, you know. How are we going to pay for this if we take a big hit economically? I’m not saying I’m not in favor of it, I’m just saying when you’re talking about $1 million, it’s time to look.”

City Administrator Keith Moody said the city is paying for R Park improvements out of its special infrastructure fund, and the resources are currently available. There are additional projects that the fund intends to pay for, and if the city’s sales tax takes a hit, Moody said it might have an impact on those projects.

The process to approve the motion to award the contract came with a good deal of confusion. The original motion on the floor was to approve the base bid and all five alternates to Gunter. An amendment to that motion called for approving the base bid and all alternates from MegaKC. Councilmember Jan Faidley said she wanted to approve a contract in a professional manner so as to not come off as “flip flopping” for less than $3,000.

Councilmember Claudia McCormack said she agreed with Faidley, and that she felt the process had already begun to move forward with Gunter. The amendment to the original motion failed, with Councilmember Benjamin Dickens and Madigan the only two voting in favor of it.

Next, the city council voted on the original motion, which Dickens, Madigan and Faidely voted against. At the same time the vote was taking place, a representative from MegaKC asked to be acknowledged. Mayor Mike Kelly granted the representative’s request since the meeting was taking place under unique circumstances already: a remote video chat due to coronavirus concerns. The representative said he was confused as to why MegaKC did not receive the contract since it was the lower bid with the alternatives included.

The city council did approve the original motion, but following the representative’s comments, the city council continued to discuss the pros and cons of MegaKC versus Gunter. Moody said the city’s purchasing policy does not require awarding a contract to the lowest bidder, and that it was not indicated by the city that the bid would be given to the lowest base bidder.

There was then uncertainty about whether or not the original motion was approved due to the ongoing discussion following the vote and comments from MegaKC’s representative. In an effort to clarify what had been approved or not approved, City Clerk Kelley Nielsen read off the original motion and the amendment, as well as how each councilmember voted.

After checking in with City Attorney Christine Roto, the mayor asked the city council to vote once again on the original motion due to the meeting’s unique circumstances. The second vote was split: Councilmember Jennfier Hill, Dickens, Madigan and Faidley voted against the original motion while Councilmembers Michael Rebne, Trisha Brauer, Jim Kelly and McCormack voted in favor of it.

The mayor voted against the original motion, stating that if the city council wanted to approve all five alternates and both Gunter and MegaKC are reputable contractors, there was no compelling reason not to go with MegaKC. A final motion from Hill called for the city council to approve the contract to MegaKC, including the base bid and all five alternates. The motion passed 6 to 2, with Kelly and McCormack voting against it.