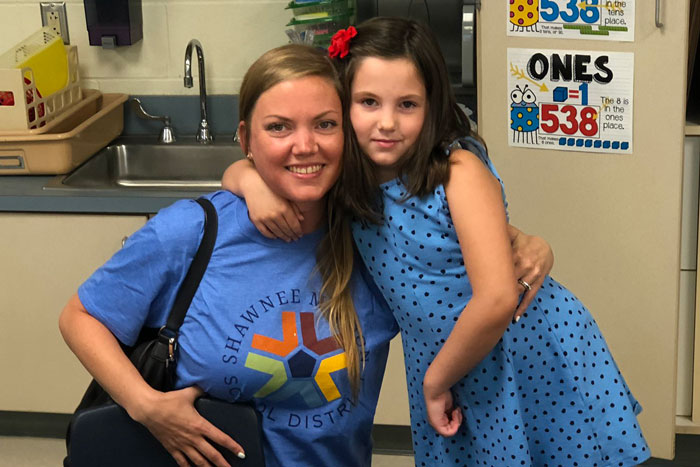 Lindsey McFall (left) said the decision will be more difficult for her second grader Quinn McFall (right) due to her strong connection with her teacher and her love of school. Photo courtesy McFall family.

With students prevented from physically going to school for the remainder of the semester, Johnson County parents are navigating uncharted waters.

Gov. Laura Kelly on Tuesday announced in-person classes for all Kansas schools would be suspended for the remainder of the school year, sparking mixed reactions from parents in Johnson County. Lindsey McFall, Shawnee Mission South English teacher and mother of four SMSD students, said she appreciates the thought, research and time that went into making this decision.

“As a parent, I was kind of starting to weigh my options,” McFall said. “I have to be in school teaching students and I’m coming into contact with hundreds of them every day. I did worry about bringing that home to my kids.”

Although she understands the decision, McFall said she still feels said for her children who left school and had no idea they weren’t going to see their classmates or teachers again this year. Now, McFall and her husband, who is also a teacher, are trying to figure out how they’re going to teach their students while also helping teach their own kids — a second grader, a seventh grader and two eighth graders.

Some of her older children’s teachers have reached out assuring the family that they will be there for whatever questions they might have, and the community has taken to social media to provide resources, McFall said. While she considers herself to be a well-rounded teacher, she said she doesn’t think she’ll be able to teach certain science concepts to her children.

But her concerns don’t stop there: The governor’s decision brings up issues of equity, and could potentially result in some educational gaps next year, McFall said. Tray-cee Graves — an educational aide at Rosehill Elementary and mother of a first grader at Merriam Park Elementary — said she felt relieved about the decision as a parent, but shared McFall’s concerns about educational gaps as an aide. Concerns aside, Graves is already preparing lesson plans to work on with her son.

“My 7-year-old and I sat down and came up with some ideas of what he would like to learn more about, and I have a lot of resources I use with my kids at school and things lying around the house,” Graves said. “We’re just trying to pull together a sort of home school program, hopefully starting next week.”

Despite Graves’ relief as a parent, she said her son — an only child — is already feeling sad about not being able to see his friends. She said she’s worried that, if this goes on much longer, he may have a hard time socially reintegrating.

Other parents don’t have an educational background to fall back on, such as Jimmy Carter, father of two elementary-aged Olathe Public School students. Although he’s had a couple of days to work through the initial shock and confusion, Carter said he’s still unsure if he’s fully on board with the decision. He and his wife both work full-time, and Carter said it would have been nice if state officials and school districts had time to come up with a plan before making the decision.

“We have to adopt, really, two more full-time jobs to go onto our plate of being a first grade teacher and a kindergarten teacher — on top of being a mom and dad,” Carter said. “It’s a lot to process.”

Carter said he’s unsure what online learning would look like for a 5-year-old and a 7-year-old, but his kids’ teachers have passed along activities and daily routines to assist the parents. He and his wife have a tentative plan in place, but will most likely have to check in each morning to see who has meetings when, and who can help teach their kids in between work.

With a 3-year-old and 1-year-old also in the mix, Carter said he and his wife have explored several options for the next couple of months. The two have even considered finding a teacher and paying them extra to help out, he said. While he may not be completely supportive of the decision, Carter said he’s hopeful the sacrifices are worth it.

“At the end of the day, if all of this saves one life, it’s certainly worth all of the inconvenience we’re going through,” Carter said.