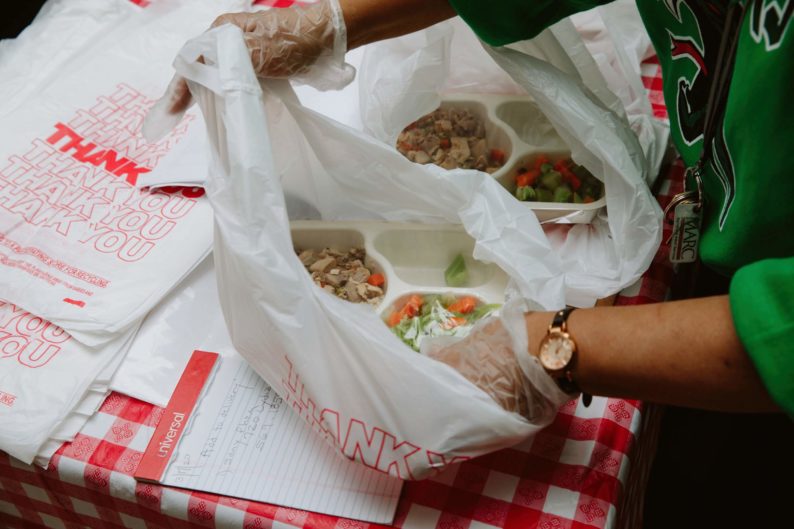 A Don Bosco staff bags up meals for area seniors. The senior center has closed it's doors to events but is still operating their meal service.

By Barbara Shelly, The Beacon

As stores and restaurants shut down and workers head home to socially isolate themselves and their families, people in Missouri and Kansas continue to look outward. They are finding ways to help others — even as needs among the elderly, homeless and most vulnerable grow more severe.

Social media sites are filled with offers to run errands and even pay for groceries for neighbors in need.

Kenzie Borland, a Wichita State University student who lives with her grandparents, said she understands why the elderly and immunocompromised, who are more at risk for COVID-19, can’t leave home right now. After posting on a neighborhood Facebook group, several people said they intended to take her up on the offer.

“We all have to step it up for our loved ones,” said Borland, who is also volunteering this week for the local Meals on Wheels.

The Rieger, a restaurant in downtown Kansas City, shut down normal operations on Monday and announced it was converting to a community kitchen for the foreseeable future.

The staff will prepare take out meals, which will be served on a pay-as-you’re-able basis from 4 p.m. to 6 p.m. seven days a week, said Whitney Coleman, the maître d’. Money that is donated will be used to pay the restaurant’s hourly staff and keep the community kitchen operating, she said. The Reiger will donate anything extra to charity, and it is also collecting canned goods and sanitary supplies to hand out to people in need.

The restaurant announced the community kitchen Monday afternoon on its Facebook page, and served 22 meals a couple of hours later, Coleman said. And people started dropping by to donate items on Tuesday.

“We are making the best of things,” Coleman said.

In that spirit, others shared tips on how to help while staying home.

A major way people can assist is with cash and other donations to the groups that specialize in helping people in normal times.

Kar Woo assists homeless, mentally ill and substance-impaired individuals through his nonprofit, Artists Helping the Homeless. Among other roles, he works with hospitals to find alternative shelter for people who take refuge in emergency rooms for problems that aren’t necessarily medical.

But this week, shelters are full and hospitals aren’t letting people stick around, Woo said.

“I had two ladies discharged (from the hospital) and literally no one wants them,” he said. “I had to put them in hotel rooms. I may have to book several more hotel rooms to address this issue, but where does the money come from? The best thing people can do is donate to people like us on the front lines.”

The Don Bosco Senior Center has suspended midday meals and social activities for older people at its drop-in center in northeast Kansas City. But its staffers will box up lunches and deliver them to seniors, said Ann Van Zee, director of development. The center already operates a Meals-on-Wheels program for homebound seniors, and serves a total of about 750 meals each weekday through its site-based and mobile programs.

Although clients will continue to receive meals, the center will lose funds it receives for providing recreational activities, and reimbursement rates for meals don’t cover the entire cost, Van Zee said. So, like other nonprofits, Don Bosco is hoping donors will continue or increase giving.

Care Beyond the Boulevard, a nonprofit, recruits doctors, nurses and other medical personnel to take health care to people on the streets, in camps and under bridges. Beginning this week, the group’s mobile van will be stocked with kits that include tissues, hand sanitizer, protein bars and bottled water, and also printed information about the COVID-19 virus and precautions that homeless people can take.

Jaynell “KK” Assmann, the group’s founder and president, said she feared it was a matter of time before the virus strikes hard at the region’s homeless population.

And instead of encouraging donations of canned and boxed goods, Harvesters is asking for cash at this time.

“With monetary donations we can leverage our buying power and we can purchase pallets of food that don’t have to be sorted,” Hallinan said.

While dealing with a pandemic is new, Harvesters has vast experience in responding to floods, droughts and other disasters, she added. “We remain committed to our mission to provide nutritious food to anyone who needs it.”

Barbara Shelly is a freelance journalist based in Kansas City.