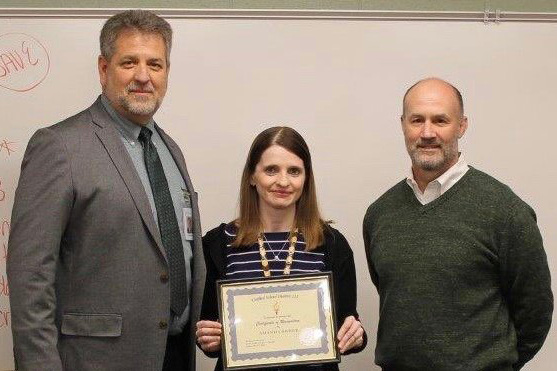 USD 232 recognized Amanda Sweet as 2019-2020 Secondary Teacher of the Year earlier this month. Photo via Twitter

Hembrey is a first grade teacher at Riverview Elementary. She joined USD 232 in August of 2001 and has spent all 19 of her years in education teaching for the district. She has also served as a new teacher mentor for the past several years.

Sweet has taught English language arts at De Soto High School since August 2006. This is her 14th year in education and at USD 232. She also serves as the assistant forensics and debate coach at the school.

The Kansas Teacher of the Year Award Program recognizes and utilizes representatives of excellent teaching in the elementary and secondary classrooms of the state, according to USD 232’s announcement. Its mission is to build and utilize a network of exemplary teachers who are leaders in school improvement, student performance and teaching.

The directive covers all electrical, natural gas, water and telecommunications utilities under the KCC’s jurisdiction, several of which have already voluntarily suspended disconnects.

The Commission may elect to extend the suspension order in a subsequent order if conditions warrant.

Although the city of Overland Park’s municipal court offices will remain open, all scheduled court hearings — including trials and appearances — are postponed until further notice, Overland Park Communications Manager Sean Reilly said in an email to the Shawnee Mission Post.

The postponement is due to the medical risks posed by the novel coronavirus, Reilly said. Staff members request the public to conduct as much business online as possible, he said. Those who need to contact Overland Park’s municipal court can do so via phone at (913) 327-6800 or via email at opmc@opkansas.org, or can request a continuance online.

Coty Borst of Shawnee convicted of murder in Platte County