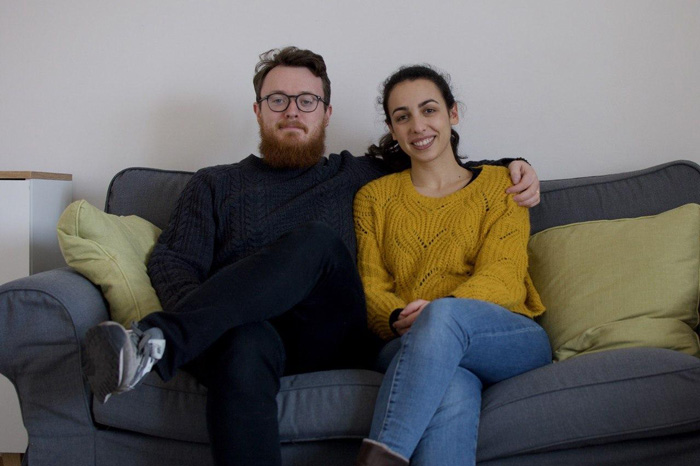 Chris Geekie, a 2005 SM Northwest grad, and his wife, Priscilla Balestrucci, are in self-quarantine at home in Germany while they watch the COVID-19 pandemic evolve around the world. Photo submitted

Note: The Shawnee Mission Post is making all of its local coverage of the coronavirus pandemic accessible to non-subscribers. (If you value having a local news source covering the situation in our community, we hope you’ll consider subscribing here).

As local governments move to try to stop the spread of the coronavirus here, a SM Northwest graduate and his wife are experiencing the pandemic in Europe.

SM Northwest grad Chris Geekie and his wife, Priscilla Balestrucci, have chosen to self-quarantine as much as possible at one of their apartments in Germany. Particularly alarming for the couple is the fact that Balestrucci’s Italian parents are on lockdown in Rome. Meanwhile, the rest of their family is spread across the U.S. and parts of Europe — where responses to COVID-19 have been mixed.

“We see each other on the weekends — or if there’s a quarantine,” Geekie said, adding that they decided to stay at their apartment in Nuremberg for the time being.

The Italian experience: Lockdowns, curfews and closed restaurants and shops

Geekie said they had been loosely following the situation as it evolved in China. Then the outbreak began to gain momentum toward the end of last month in the northern part of Italy, just before the couple made a short trip in early March to visit Balestrucci’s parents in Rome, her hometown.

At that point, Rome was not affected, but news reports out of northern Italy indicated that the outbreak worsened because people who were not showing any symptoms of the virus were still spending time together — and not in self-quarantine — even though schools were closed.

“Apparently, it didn’t go very well,” Balestrucci said. “People that were in isolation eventually used the time to go skiing and vacationing and stuff.”

The couple had planned to take another vacation trip to Rome this week, but they had to cancel after the city went on lockdown.

Now, all of Italy is on lockdown: It started with reduced travel between cities, a curfew, reduced hours for restaurants and pubs by early evening, and limiting access to supermarkets and pharmacies.

All restaurants, pubs, shops and spaces for social gatherings are now closed as well. And hospitals are overwhelmed by the load of new patients.

“It’s quite strange to think of my city in lockdown,” Balestrucci said. “It’s incredible.”

Italians wear masks when they go out now, mostly because they get strange looks if they do not. Others are starting to experience cabin fever (here’s an example of how some people are entertaining themselves).

“It’s getting even more drastic in the past few days,” Geekie said. “They’re just like, nobody go outside unless you really, really need to.”

On the other hand, things are quite different in Germany. Country leaders encourage working from home where possible, and closing some schools where there have been confirmed cases, but otherwise things haven’t changed much.

“Italy, I think, probably realized a little too late how severe this thing is,” Geekie said. “The problem that we’re seeing is that in Germany, there’s this kind of awareness that things aren’t going well in Italy, (but) the measures are not anywhere near the same level of rigidness, I would say, that’s going on in Italy. They’re not as worried, or they’re waiting for something really bad to happen. It’s unclear.

“Because we have family in Italy, we’ve been very aware of how bad this could be, so that’s why we’re hanging out at home a lot, not going to bars anymore. We’re just trying to wait and see how this goes.”

The couple is also growing more and more worried about their family overseas and in other parts of Europe.

Balestrucci’s sister is in Sweden, where she was quarantined for two weeks because she had also just returned from Italy in early March. Meanwhile, her brother is in the United Kingdom, where access to healthcare is limited because he is a foreign national. Plus, he has hardly seen any noticeable policy changes to slow the spread of the virus — but flights are limited, so it’s difficult for him to leave the island.

“They all seem to be reacting in different ways; none of them seem to be predictable because the virus spreading is unpredictable,” Geekie said. “That’s been kind of nerve-wracking.”

‘The best and only way to make a change’

As they watch the situation evolve daily, and wait for changes, the couple turns toward the United States, especially where Geekie’s family lives in Shawnee.

“Reading the news from abroad, it’s frustrating seeing how this pandemic seems to be bringing all the problems and showing us the cracks in the system, and I can’t do anything about it,” Geekie said. “Everyone should be worried, because by being worried, you really reduce the effects and the growth (of the virus).”

While responses from government leaders may be mixed, the couple hopes that Americans will take the virus seriously and take actions to keep themselves safe and healthy.

“Social distancing seems like the best and only way to make a change,” Geekie said.

“Yeah, the earlier the better,” Balestrucci added. “A single person can make a difference.”