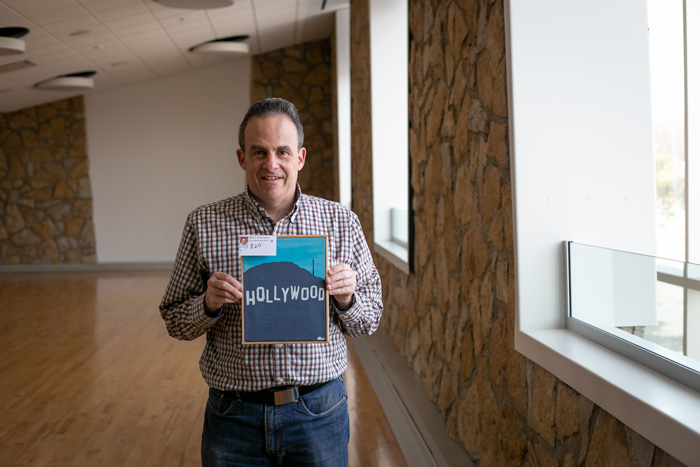 As an Emerging Artist at the Johnson County Arts & Heritage Center, Brad Friedman is expressing his creativity through the arts. But he does much more than create artwork. He spends lots of time with friends across his many social circles: Bowling at AMF College Lanes, acting, or volunteering with Meals on Wheels. He also enjoys listening to music — especially oldies from Elvis Presley, The Carpenters, Frank Sinatra and Ethel Merman — and watching TV, especially game shows like “Jeopardy” and “Wheel of Fortune.” One of his favorite movies is Superman (the one starring Christopher Reeve). And he also enjoys traveling, sightseeing and taking pictures. Originally from New Jersey, he now lives in Leawood with his sister, Lori Friedman. The two recently returned from a trip to Hollywood with Lori’s boyfriend, Rick Lumpkin. The trip was an inspiration for one of his artworks, which is on display on the walls of the center’s art room. Emerging Artists is a program of Johnson County Developmental Supports.

This was my 56th birthday wish. I went with Lori and Rick. It was warm, sunshine weather. That’s the Hollywood sign right on the mountain. I memorized it. I sure have a photographic memory.

I also went to see the Hollywood Bowl. I was thinking about classical music, like the old masters: Strauss, Ravel, Schubert, Rossini, Bach, Tchaikovsky, Chopin. Parts of those songs, I’ve requested and put on my iPod.

Next day, it’s off to the Paramount Studios. I saw when Lucille Ball and Desi Arnaz starred in “I Love Lucy” but sold Desilu Productions to Paramount, a Gulf+Western company. It’s also famous for “Star Trek,” “Mission Impossible,” movies like “White Christmas,” “Saturday Night Fever” and “Grease.”

As a matter of fact, I was only 2 years old when I taught myself how to paint and draw. I used to draw pictures from television, but I don’t do that anymore — it’s opposed by my private art lessons teacher, who meant me to make professional, nicer artwork.

That’s why I am creating trees, animals, birds, fishes, mountains, landscapes, flowers, vases and, sometimes, faces made the hard way, especially women. It’s hard to get the right proportion (when drawing faces).